We’ve all heard the phrase “passive income” to describe how people can make money by owning rental properties. Many Americans would love to passively earn money, but the process of becoming a landlord can be intimidating and complicated.

I mean, how many people have looked back and wished they hadn’t sold a property after seeing its value rise years after selling it?

And those who are already landlords can get overwhelmed by the complexities of managing properties.

One startup out of Boston, Knox Financial, aims to help people identify and manage residential rentals with its algorithm-based platform, and it’s raised a $10 million Series A to help it further that goal. Boston-based G20 Ventures led the round, which included participation from Greycroft, Pillar VC, 2LVC, and Gaingels.

The investment brings Knox’s total raised since its inception in 2018 to $14.7 million. The company closed on a $3 million seed round in January 2020, led by Greycroft.

Knox co-founder and CEO David Friedman is no stranger to startups. He founded Boston Logic — an integrated marketing platform and online marketing services for real estate offices and agents — in 2004. He sold that company (now under the name Propertybase) to Providence Equity for an undisclosed amount in 2016.

Knox launched its platform in March of 2019, with the goal of offering homeowners who are ready to move “a completely hands-off way” of converting a home they’re moving out of into an investment property. It also claims to help landlords more easily and efficiently manage their rentals.

At the time of its seed round early last year, the company was only operating in the Boston market and had 50 units on its platform. It’s now operating in seven states, has “hundreds” of investment properties on its platform and is overseeing a portfolio of more than $100 million.

So how does it work? Once a property is enrolled on Knox’s “Frictionless Ownership Platform,” the company automates and oversees the property’s finances and taxes, insurance, leasing and legal, tenant and property care, banking and bill pay.

Knox also has developed a rental pricing and projection model for calculating the investment rate of return a property will produce over time. 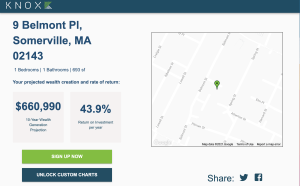 “We save investors a lot and almost always make their portfolios more profitable,” Friedman said. “If someone is moving or upsizing, we can turn properties into incredible ROI generators or cash flow.”

The company’s revenue model is simple.

“When a dollar of rent moves through our system, we keep a dime,” Friedman told TechCrunch. “We align our interests with our customers. If there’s no rent coming in, we’re not making money. Or if a tenant doesn’t pay rent, we don’t make money.”

Knox plans to use its new capital to continue expanding geographically and getting the word out to more people.

“We want to become the de facto platform for real estate investment acquisition and ownership,” Friedman said. “And we have to be coast to coast to really do that for everybody. So, we’re still very early in our growth trajectory.”

Bob Hower, co-founder and partner of G20 Ventures, shared that weeks after his college graduation, he had bought a fixer upper with his mother’s help. A week after finishing renovations, he put the house on the market. Over the subsequent five months, he gradually reduced the price as the market softened, and eventually the property sold at a small profit.

“That house now is worth a multiple of what I paid for it,” Hower recalls. “In hindsight, the mistake I made was deciding to sell the house at all.”

That experience helped Hower appreciate what he describes as a “clarity of thinking” in Knox’s business model.

“Had Knox existed decades ago, I’d likely still have that fixer-upper I bought after college,” he said. “Investing platforms such as Betterment have collapsed multiple advising and optimization activities into a simple single-sign-on service, and Knox is the first company to apply this type model to residential real estate investing.”