Cora, a São Paulo-based technology-enabled lender to small and-medium-sized businesses, has raised $26.7 million in a Series A round led by Silicon Valley VC firm Ribbit Capital.

Kaszek Ventures, QED Investors and Greenoaks Capital also participated in the financing, which brings the startup’s total raised to $36.7 million since its 2019 inception. Kaszek led Cora’s $10 million seed round (believed at that time to be one of the largest seed investments in LatAm) in December 2019, with Ribbit then following.

Last year, Cora got its license approved from the Central Bank of Brazil, making it a 403 bank. The fintech then launched its product in October 2020 and has since grown to have about 60,000 customers and 110 employees.

Cora offers a variety of solutions, ranging from a digital checking account, Visa debit card and management tools such as an invoice manager and cashflow dashboard. With the checking account, customers have the ability to send and receive money, as well as pay bills, digitally.

This isn’t the first venture for Cora co-founders Igor Senra and Leo Mendes. The pair had worked together before — founding their first online payments company, MOIP, in 2005. That company sold to Germany’s WireCard in 2016 (with a 3 million-strong customer base), and after three years the founders were able to strike out again. 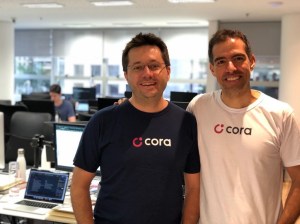 With Cora, the pair’s long-term goal is to “provide everything that a SMB will need in a bank.”

Looking ahead, the pair has the ambitious goal of being “the fastest growing neobank focused on SMBs in the world.” It plans to use the new capital to add new features and improve existing ones; on operations; and launching a portfolio of credit products.

In particular, Cora wants to go even deeper in certain segments, such as B2B professional services such as law and accounting firms, real estate brokerages and education.

Ribbit Capital partner Nikolay Kostov believes that Cora has embarked on “an ambitious mission” to change how small businesses in Brazil are able to access and experience banking.

“While the consumer banking experience has undergone a massive transformation thanks to new digital experiences over the last decade, this is, sadly, still not the case on the small business side,” he said.

Meanwhile, the number of new small businesses in the country continues to grow.

“The combination of these factors makes Brazil an especially attractive market for Cora to launch in and disrupt,” Kostov told TechCrunch. “The Cora founding team is uniquely qualified and deeply attuned to the challenges of small businesses in the country, having spent their entire careers building digital products to serve their needs.”

Since Ribbit’s start in 2012, he added, LatAm has been a core focus geography for the firm “given the magnitude of challenges, and opportunities in the region to reinvent financial services and serve customers better.”

Ribbit has invested in 15 companies in the region and continues to look for more to back.

“We fully expect that several fintech companies born in the region will become global champions that serve to inspire other entrepreneurs across the globe,” Kostov said.