It appears that the slowdown in tech debuts is not a complete freeze; despite concerning news regarding the IPO pipeline, some deals are chugging ahead. This morning, we’re adding Alkami Technology to a list that includes Coinbase’s impending direct listing and Robinhood’s expected IPO.

We are playing catch-up, so let’s learn about Alkami and its software, dig into its backers and final private valuation, and pick apart its numbers before checking out its impending IPO valuation. After all, if Kaltura and others are going to hit the brakes, we must turn our attention to companies that are still putting the hammer down.

Frankly, we should have known about Alkami’s IPO sooner. One of a rising number of large tech companies based in nontraditional areas, the bank-focused software company is based in Texas, despite having roots in Oklahoma. The company raised $385.2 million during its life, per Crunchbase data. That sum includes a September 2020 round worth $140 million that valued the company at $1.44 billion on a post-money basis, PitchBook reports.

So, into the latest SEC filing from the software unicorn we go!

Alkami Technology is a software company that delivers its product to banks via the cloud, so it’s not a legacy player scraping together an IPO during boom times. Instead, it is the sort of company that we understand; it’s built on top of AWS and charges for its services on a recurring basis.

The company’s core market is all banks smaller than the largest, it appears, or what Alkami calls “community, regional and super-regional financial institutions.” Its service is a software layer that plugs into existing financial systems while also providing a number of user interface options.

In short, it takes a bank from its internal systems all the way to the end-user experience. Here’s how Alkami explained it in its S-1/A filing: 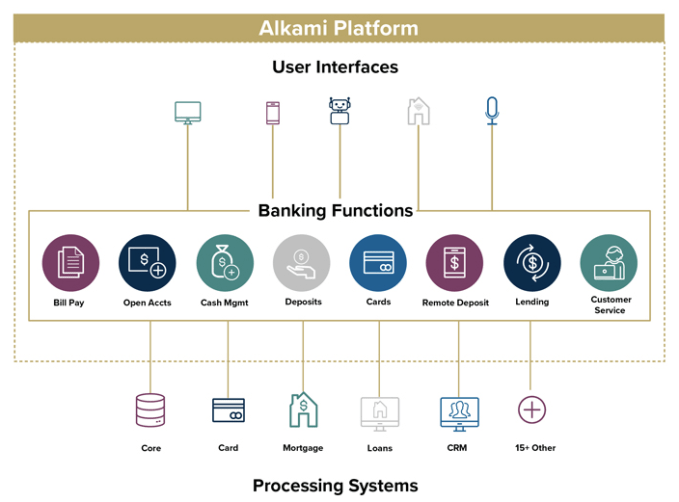