There are fewer than 300,000 doctors in India actively practicing medicine. They serve hundreds of millions of patients who suffer from chronic illness in the world’s second-most populous nation.

A doctor only has a few minutes to spend on a patient, remember the past diagnosis by glancing at their record and formulate a plan of management.

HealthPlix, a Bangalore-based startup, believes it can help doctors serve these patients more efficiently with the limited time they have.

The startup has developed a software for doctors that helps them in a methodical template keep tabs on the symptoms a patient has displayed in the past, the medicine that was prescribed to them and if they are showing any improvements.

But it doesn’t stop there, said Sandeep Gudibanda, co-founder of HealthPlix, in an interview with TechCrunch. The software has a knowledge base that is making a determination of all the other factors that a doctor needs to assess as they treat the patient.

For instance, if a patient has diabetes, and they have mentioned that they had swollen feet and are experiencing more frequent visits to the washroom, said Gudibanda, the doctor can quickly assess that the patient’s symptoms are getting worse and needs to start looking at the function of the kidney and other organs and monitor blood sugar.

“As a doctor, you are able to see how my disease is progressing, what medicine was prescribed to me and if they are working. So you are not going to prescribe me some medicine that didn’t work two months ago. Based on the data of more than 12 million patients we have, our software is also able to inform doctors what other things I am exposed to,” he said.

“Doctors have immense knowledge, but they have very little time. So how do we help them make better decisions on the few minutes they have with a patient,” he asked. “These few minutes matter most. It is in this precious interaction that health decisions get made, diagnostic tests get prescribed, pharmaceutical brands get chosen, surgical procedures get planned, and hospital referrals get made. This interaction is the moment of truth, where $88 billion of annual healthcare spend is decided.” 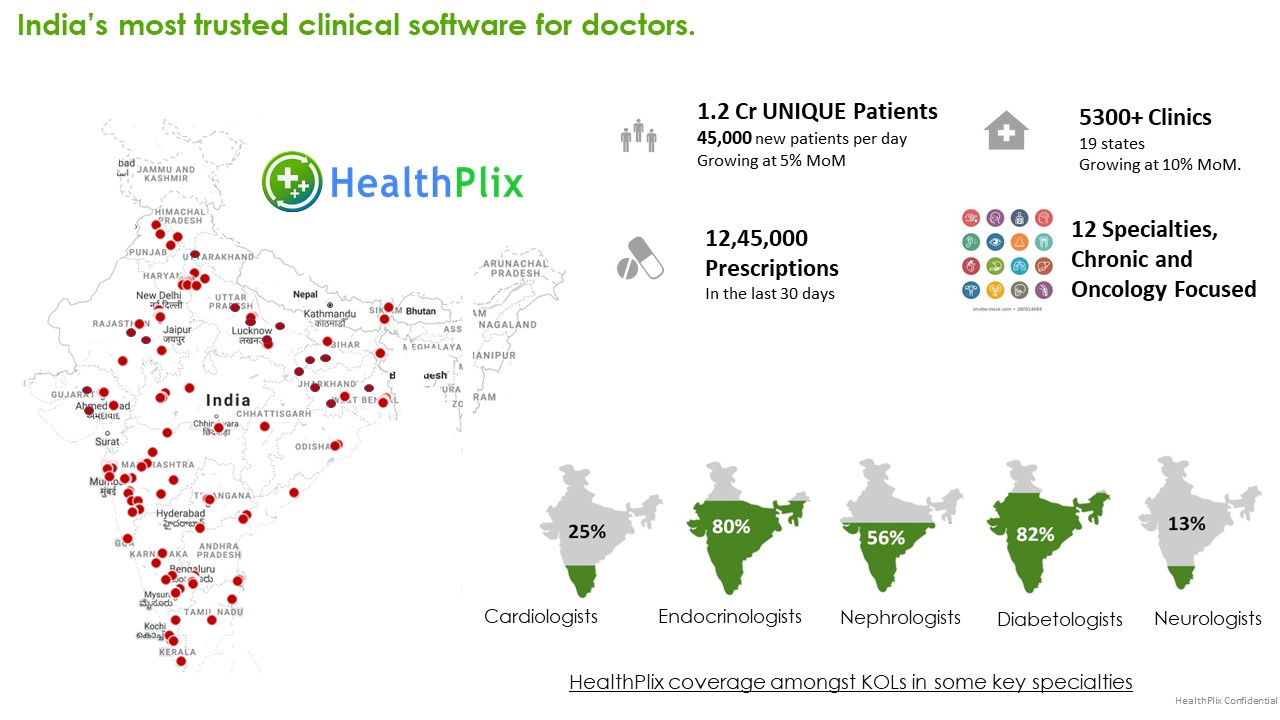 Scores of health tech startups in India today are attempting to serve patients. What distinguishes HealthPlix from most is the approach it has taken. Unlike other startups, HealthPlix’s solution puts doctors at its centre, said Gudibanda, who has spent nearly two decades in entrepreneurship in health tech.

He said in a country like India, where there are so many people suffering from chronic diseases, a doctor’s intervention is needed for best results. “While going through the patient’s route, we might achieve some scale, we realized that the stakeholder they reason with and listen to is the doctor. A doctor here serves hundreds of patients. You work with the doctor and you make a bigger impact,” he said.

“Second, because of the immense workload on doctors, who can only spend 2-3 minutes to serve a patient, if he or she doesn’t have all the information, their thinking might get compromised. Hence the doctor had to be in the piece.”

HealthPlix initially started in late 2016 to help doctors connect with patients digitally. But that model, he recalled, wasn’t working. The current model is growing fast. More than 6,000 doctors today are using HealthPlix for over four hours a day, he said. The startup plans to reach over 50,000 doctors in two years.

On Wednesday, the startup said it has raised $13.5 million in its ongoing Series B financing round. The round was led by Lightspeed Venture Partners. The startup has now raised about $23.5 million to date.

“What sets HealthPlix apart is its doctor-first B2B approach. Doctors are the most influential decision-makers in healthcare. We believe whichever platform wins their trust will have the sole right to orchestrate the entire $88 billion of healthcare spend,” said Vaibhav Agrawal, partner at Lightspeed, in a statement.

Gudibanda said the startup will also deploy the fresh capital to tackle some acute diseases.