Along with a more spacious cockpit, more storage and some upgraded cupholders, Audi has packed in some serious new tech into its upcoming all-electric Q4 e-tron compact crossover, including an augmented reality head-up display (HUD) that’s reactive enough to accurately stick to a driver’s real environment.

Audi revealed Tuesday the interior of the Q4 e-tron, the fifth electric vehicle in its lineup and part of the German automaker’s plan to launch more than 30 EVs and plug-in hybrids by 2025. The Q4 e-tron has been expected for some time; it was first revealed as a concept at the 2019 Geneva International Motor Show.

The exterior of the production version of the Q4 is still camouflaged, but we know its dimensions. The takeaway: An electric vehicle that fits in the larger compact SUV segment with a short overhang and wheelbase of 9.1 feet — a combination that gives it a rather stout look. However, that allows for an interior of 6 feet in length, the kind of space found in a large full-size class SUV.

The underlying architecture of the vehicle is based on its parent company VW’s modular electric drive toolkit chassis, or MEB platform. This flexible modular system, first introduced by VW in 2016, was developed to make it more efficient and cost-effective to produce a variety of EVs. It has also given designers more room to play with thanks to the flat floor. And they took advantage of that space, popping in a center console with two cup holders, a 4.4-liter stowage compartment with a cover, two (or four as an option) USB-C sockets and the Audi phone box (which charges wirelessly and boosts your phone’s signal) upon request. 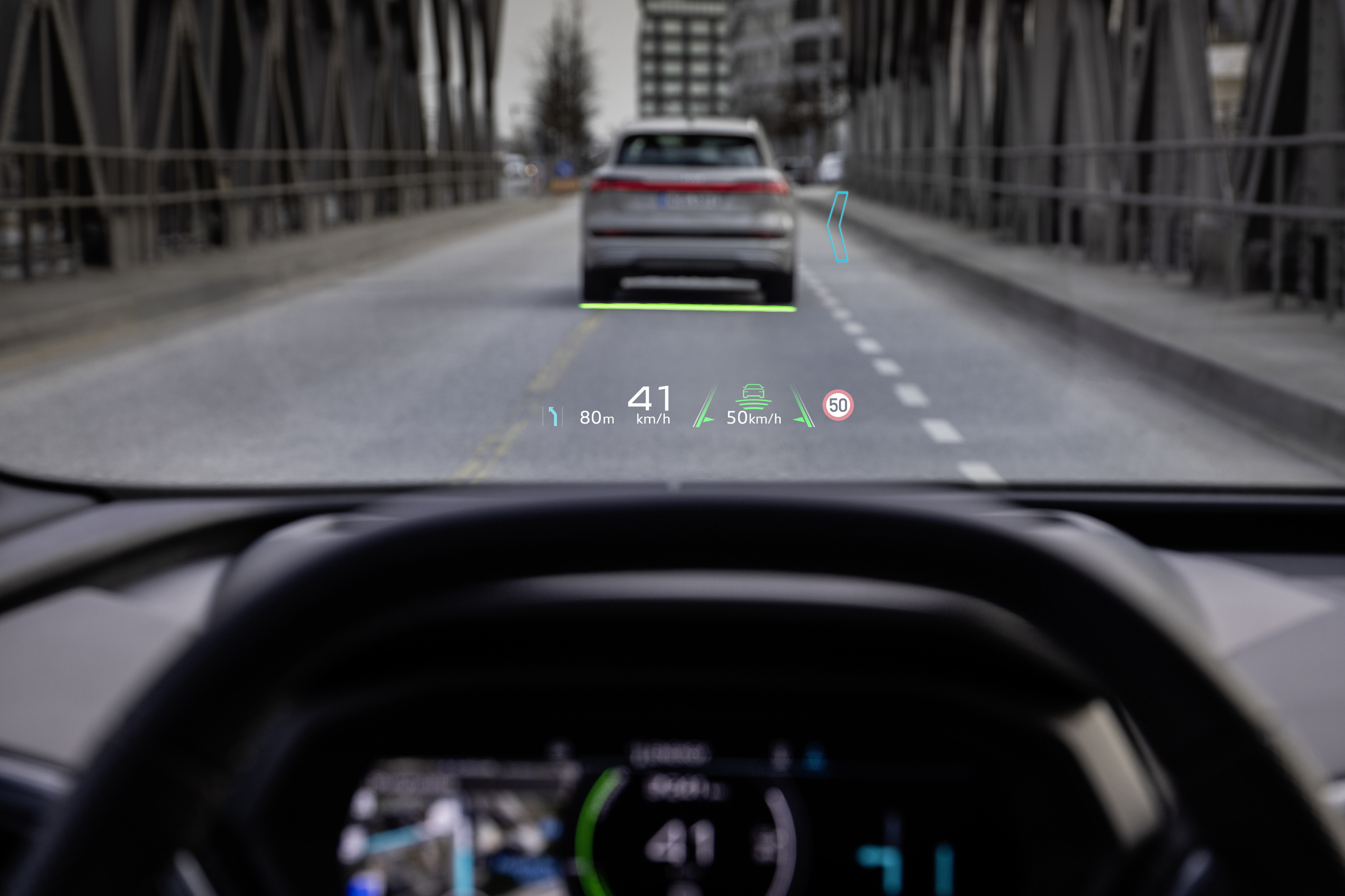 The real story here is the tech — and most notably an option to add an AR-enabled windshield. The AR windshield provides a wider field of view and more accurate and dynamic animations versus a standard windshield HUD. The Q4 e-tron will break down important displayed information via two sections: one for status and one for AR. The former, appearing about 3 meters ahead of the driver, will display the driving speed, traffic signs, the assist system and navigation symbols as static displays.

With the AR section, the driver will perceive the floating symbols to be about 10 meters away. That’ll display information like lane departure warnings that superimpose a red line on the real-life lane marking and a colored stripe over an active car driving in front when in adaptive cruise control.

“Head-up displays aren’t new,” states Audi. “This just takes the field of vision farther out so it enables more active use.”

The AR will also display navigation information. Audi calls the turning arrows “drones,” probably because the arrows fly ahead when driving straight and then disappear, reappearing before the next point of action. When the driver approaches an intersection, the drone announces the turn before steering the driver onto the road with precision. 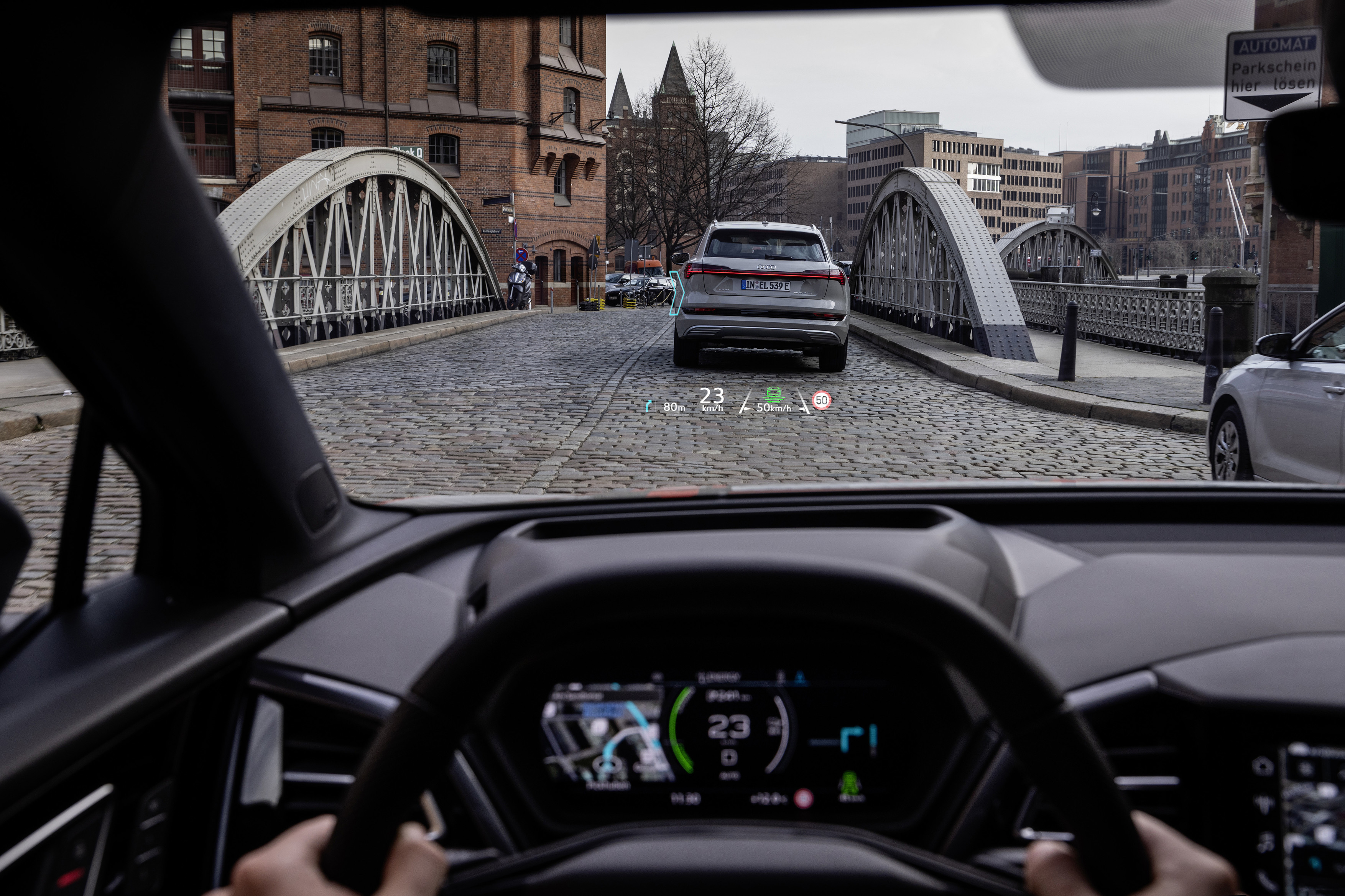 On the software side of things, the Q4 e-tron’s processing unit, called the AR Creator, picks up raw data from the car’s front camera, radar sensor and GPS navigation to render display symbols at a rate of 60 frames per second and adapt them to the surrounding environment. The quality of these displays, shown via a bit of advanced smoke and mirrors on what Audi calls the EV’s “picture generation unit (PGU)” — basically, a lot of mirrors — will obviously be key to how well it works in real life. With only simulations to show for it currently, it’s not clear how well Audi will pull this off. A wider frame with dynamic symbols must deliver on its promise to show up “just as clearly as their real-life environment” otherwise they’ll become a hindrance to the driver, and if they don’t pull off the depth effect exactly, they could even cause driver discomfort.

The Q4 e-tron also features updated natural-language voice control, activated by saying “Hey Audi.” The new car will also ditch physical buttons on the steering wheel in favor of touch-sensitive ones. But with a haptic feedback loop, it’ll still feel somewhat like you’re pressing a button.

About 3% of the company’s sales in 2020, or 47,000 vehicles, were the electric e-tron SUV and the e-tron Sportback, a number that will surely increase as the company continues to roll out luxury EVs.