Optimizely co-founder Dan Siroker said the idea for his new startup Scribe goes back to a couple of personal experiences — and although Scribe’s first product is focused on Zoom, those experiences weren’t Zoom-related at all.

Instead, Siroker recalled starting to go deaf and then having an “epiphany” the first time he put in a hearing aid, as he recovered a sense he thought he’d lost.

“That really was the spark that got me thinking about other opportunities to augment things your body naturally fails at,” he said.

Siroker added that memory was an obvious candidate, particularly since he also has aphantasia — the inability to visualize mental images, which made it “hard to remember certain things.”

It may jog your own memory if I note that Siroker founded Optimizely with Pete Koomen in 2010, then stepped down from the CEO role in 2017, with the testing and personalization startup acquired by Episerver last year. (And now Episerver itself is rebranding as Optimizely.)

Fast-forward to the present day and Siroker is now CEO at Scribe, which is taking signups for its first product. That product integrates into Zoom meetings and transforms them into searchable, shareable transcripts.

Siroker demonstrated it for me during our Zoom call. Scribe appears in the meeting as an additional participant, recording video and audio while creating a real-time transcript. During or after the meeting, users can edit the transcript, watch or listen to the associated moment in the recording and highlight important points.

From a technological perspective, none of this feels like a huge breakthrough, but I was impressed by the seamlessness of the experience — just by adding an additional participant, I had a full recording and searchable transcript of our conversation that I could consult later, including while I was writing this story. 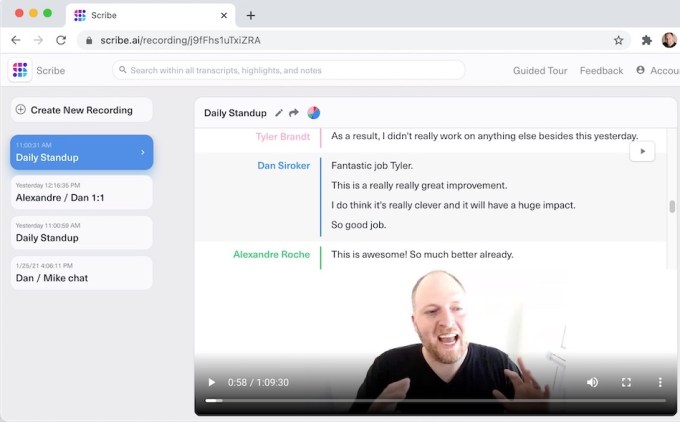 Although Scribe is recording the meeting, Siroker said he wants this to be more like a note-taking replacement than a tape recorder.

“Let’s say you and I were meeting and I came to that meeting with a pen and paper and I’m writing down what you’re saying,” he said. “That’s totally socially acceptable — in some ways, it’s flattering … If instead, I brought a tape recorder and plopped in front of you and hit record — you might actually have this experience — with some folks, that feels very different.”

The key, he argued, is that Scribe recordings and transcripts can be edited, and you can also turn individual components on and off at any time.

“This is not a permanent record,” he said. “This is a shared artifact that we all create as we have a meeting that — just like a Google Doc — you can go back and make changes.”

That said, it’s still possible that Scribe could record some embarrassing comments, and the recordings could eventually get meeting participants in trouble. (After all, leaked company meeting recordings have already prompted a number of news stories.) Siroker said he hopes that’s “not common,” but he also argued that it could create an increased sense of transparency and accountability if it happens occasionally.

Scribe has raised around $5 million in funding, across a round led by OpenAI CEO Sam Altman and another led by First Round Capital. 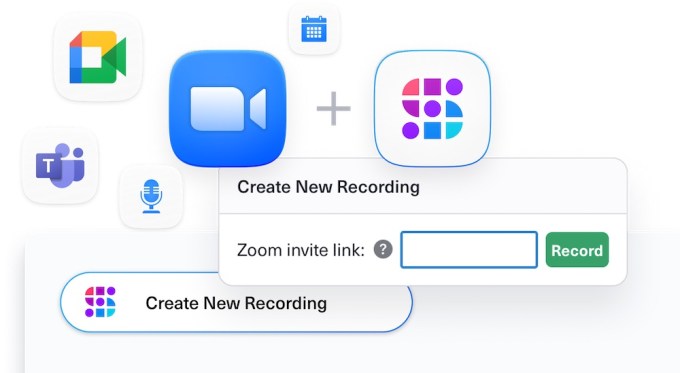 Siroker told me he sees Zoom as just the “beachhead” for Scribe’s ambitions. Next up, the company will be adding support for products like Google Meet and Microsoft Teams. Eventually, he hopes to build a new “hive mind” for organizations, where everyone is “smarter and better” because so many of their conversations and knowledge are now searchable.

“Where we go after that really depends on where we think we can have the biggest positive impact on people’s lives,” he said. “It’s harder to make a case for personal conversations you have with a spouse but … I think if you strike the right balance between value and privacy and control, you could really get people to adopt this in a way that actually is a win-win.”

And if Scribe actually achieves its mission of helping us to record and recall information in a wide variety of contexts, could that have an impact on our natural ability to remember things?

“Yes is the answer, and I think that’s okay,” he responded. “Your brain has limited energy … Remembering the things somebody said a few weeks ago is something a computer can do amazingly. Why waste your precious brain cycles doing that?”