Fresh off the termination of its planned merger with Visa, Plaid announced Thursday a new income verification product, which it said is aimed at “improving the lending lifecycle” with payroll data.

Dubbed simply Income, the new product — which is currently in beta — is designed to make it easier for people to verify their income in order to do things like secure loans, qualify for mortgages, rent apartments and lease cars, among other things.

Plaid Income gives lenders — both at fintech companies and financial institutions — verified and permissioned data on the income, employment status and tax liabilities of individual users.

The San Francisco-based company says it has been developing its Payroll product suite for more than a year. Last month, Plaid launched its other product in that suite, Deposit Switch, which is designed to allow people to “quickly” switch their direct deposits to a new or existing bank account by linking their payroll account via Plaid.

Visa will not acquire Plaid after running into regulatory wall

Notably, Plaid opted to build out its own income verification offering rather than partner with another fintech.

A spokesperson told TechCrunch via email that the company is “always” looking to provide people with the most holistic view of their financial lives.

“Over the past few years, we’ve added support for several additional different types of consumer-permissioned data, including liabilities, investments, mortgage data and more,” the spokesperson added. “It’s become clearer that payroll data has huge potential value for enabling new or more streamlined services that help people better manage their financial lives, and we knew we wanted to bring that to market ourselves.”

Historically, the process of providing information so that lenders can verify employment status, income and ability to pay can place a heavy burden on applicants.

“They often need to retrieve and then share multiple documents or PDFs, which then a lender must process and review,” Plaid points out. With Income, the process is streamlined, the fintech infrastructure provider claims.

Using Plaid Link, applicants have the choice to share their payroll information using one of two methods:

To provide a more “familiar and secure” experience for applicants, Plaid is developing credential-less authentication capabilities. This means that, say, an applicant for a credit card could supply key identifying information to the lender that Plaid would then use to locate his or her income information. Also, an applicant will have the chance to review the information they are sharing and opt out of sharing it at any time. 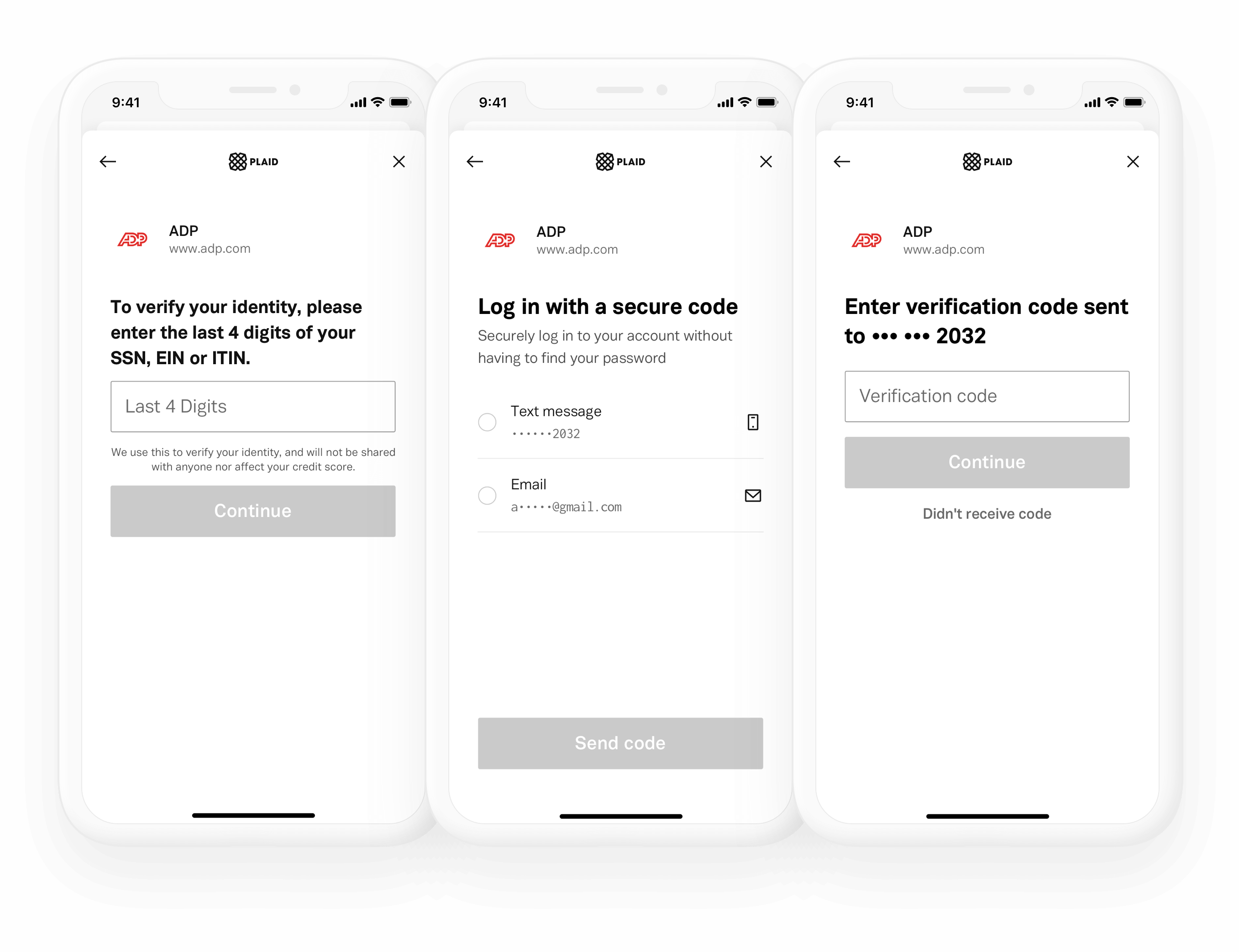 Kate Adamson, product lead at Plaid, said the company views access to payroll data as the next area of opportunity in financial services.

“The past decade of fintech innovation has shown that people can make better financial decisions more easily with better access to and control of their own financial data,” she told TechCrunch.

The income verification space is an increasingly crowded one. Last June, TechCrunch wrote about Pinwheel, an API layer for payroll data that handles everything from income and employee verification to easily switching and managing direct deposit. The company officially came out of stealth last year, announcing that it had raised a $7 million seed round from Josh Kopelman at First Round Capital and Greg Bettinelli at Upfront Ventures.

There’s also Argyle, which is building a “gateway to access employment records.” In October, that startup announced a $20 million Series A funding round led by Bain Capital Ventures. Ironically, Argyle’s name was inspired by Plaid, according to Argyle CEO and co-founder Shmulik Fishman. At the time, he told me that the company intentionally named Argyle after a pattern.

“I’m a huge fan of Plaid, and make no secret about it,” Fishman had said. “Plus, there’s a number of other successful companies such as Stripe and Checkr named after patterns. We went through a list of patterns and polka dots didn’t sound very good. So we settled on Argyle. And ultimately, we want to be the Plaid for employment records.”