Doing home renovations yourself can be more cost-effective than hiring a contractor, but many people don’t know where to begin. Ian Janicki, the founder and CEO of DIY home renovation startup Outfit, has always wanted to make architecture and design more accessible to people.

“I realized I could leverage my knowledge of being handy to create a product that scaled,” he told TechCrunch.

For those who want to go through the Outfit process, the first step is submitting information about the space they’re looking to renovate, such as dimensions and photos, as well as the maximum amount they’re looking to spend. Outfit then provides information about the expected cost of the project, the handiness level required to complete the project and everything that would need to be done in order to complete the project.

“We make sure it’s transparent and that you understand the amount of time that might be required,” Janicki said.

Once someone decides they want to move forward, Outfit then sends all the necessary tools and materials to the customer. Through the app, Outfit offers a step-by-step guide for completing the project. In the event someone gets stuck, they can chat with Janicki or someone else from the Outfit team for support. 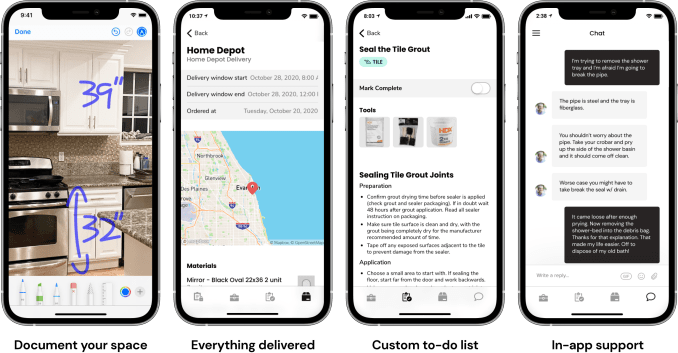 Outfit has had a small set of pilot customers — some who have completed their projects and some whose projects are still underway.

“The millennial generation is now starting to purchase their homes and has been accelerated because of remote work and COVID,” Janicki said. “They’re the Ikea generation and can put together bookshelves and are really used to digital experiences and are now demanding this digital solution.”

So far, the projects have ranged in cost from $1,000 to $15,000, but it really depends on things like how invasive the project is, how big the space is and more, Janicki said. The rendered “after” photo below would probably cost about $9,000. In general, Outfit charges customers the cost of the actual materials (e.g. power drills, wrenches, cabinets, tiles, etc.) and then adds a percentage of the total on top as a surcharge to the customer. 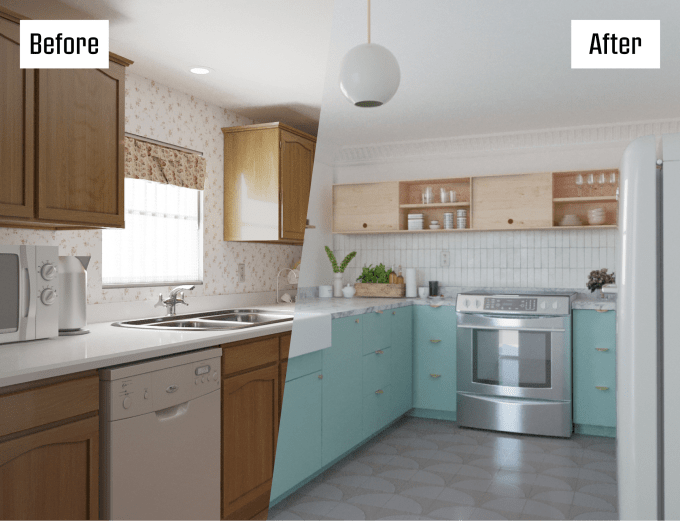 Down the road, Outfit envisions offering rentals of the tools themselves, but Janicki said he just wanted to streamline everything in the early days.

“Reverse logistics is complicated to we’re trying to take it one step at a time,” he said.

There are a number of home improvement startups out there, such as Eano, Renno and others, but Janicki said he’s not aware of any direct competitors. He said he recognizes that there are some people who are fully capable of buying all the necessary items themselves, watching a video on YouTube and then completing the project. Meanwhile, homeowners are also just as capable of hiring someone to do the project for them. But with Outfit, Janicki sees it as somewhere in between. He calls it “DIY plus.”

“In terms of being handy, it’s a rare trait that everyone appreciates,” Janicki said. “If we can elevate people in their handiness level, I’m going to be super happy. It’s that pride that you were actually able to accomplish that.”

Outfit is currently available nationwide. To date, the company has backing from Y Combinator, and previously raised about $700,000 from investors like GitHub CEO Nat Friedman, B Capital Group’s Crissy Costa, Gumroad CEO Sahil Lavingia and others.