The team at Reduct.Video is hoping to dramatically increase the amount of videos created by businesses.

The startup’s technology is already used by customers including Intuit, Autodesk, Facebook, Dell, Spotify, Indeed, Superhuman and IDEO. And today, Reduct is announcing that it has raised a $4 million round led by Greylock and South Park Commons, with participation from Figma CEO Dylan Field, Hopin Chief Business Officer Armando Mann and former Twitter exec Elad Gil.

Reduct was founded by CEO Prabhas Pokharel and CTO Robert Ochshorn (both pictured above). Pokharel argued that despite the proliferation of streaming video platforms and social media apps on the consumer side, video remains “underutilized” in a business context, because it simply takes so much time to sort through video footage, much less edit it down into something watchable.

As Pokharel demonstrated for me, Reduct uses artificial intelligence, natural language processing and other technologies to simplify the process by automatically transcribing video footage (users can also pay for professional transcription), then tying that transcript to the video.

“The magic starts there: Once the transcription has been made, every single word is connected to the [corresponding] moment in the video,” he said. 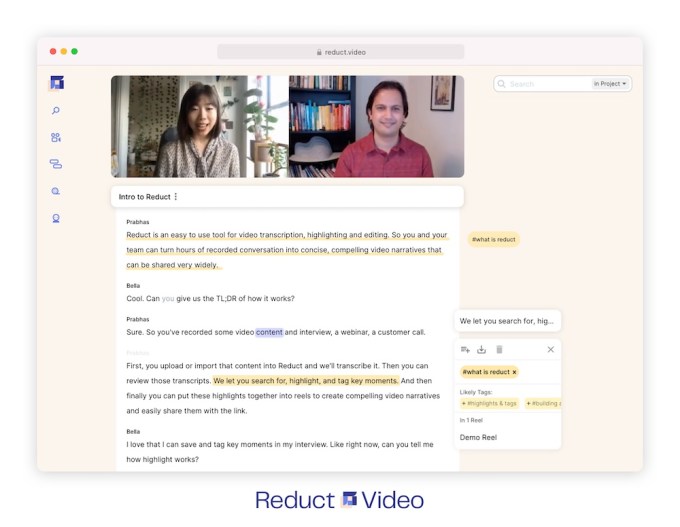 That means editing a video is as simple as editing text. (I’ve taken advantage of a similar linkage between text and media in Otter, but Otter is focused on audio and I’ve treated it more as a transcription tool.) It also means you can search through hours of footage for every time a topic is mentioned, then organize, tag and share it.

Pokharel said that AI allows Reduct to simplify parts of the sorting and editing process, like understanding how different search terms might be related. But he doesn’t think the process will ever become fully automated — instead, he compared the product to an “Iron Man suit,” which makes a human editor more powerful.

He also suggested that this approach changes businesses’ perspective on video, and not just by making editing faster and easier.

“Users on Reduct emphasize authenticity over polish, where it’s much more the content of the video that matters,” Pokharel said. He added that Reduct has been “learning from our customers” about what they can do with the product — user research teams can now easily organize and share hundreds of hours of user footage, while marketers can turn customer testimonials and webinars into short, shareable videos.

“Video has been so supply constrained, it’s crazy,” he continued. “There are all these use cases for asynchronous video that [companies] haven’t even bothered with.”

For example, he recalled one customer who said that she used to insist that team members attend a meeting even if there was only two minutes of it that they needed to hear. With Reduct, she can “give them that time back” and just share the parts they need.