Managing IoT devices in a large organization can be a messy proposition, especially when many of them aren’t even managed directly by IT and often involve integrating with a number of third-party systems. SecuriThings wants to help with a platform of services to bring that all under control, and today the startup announced a $14 million Series A.

Aleph led the round with participation from existing investor Firstime VC and a number of unnamed angels. The company has raised a total of $17 million, according to Crunchbase data.

Roy Dagan, company CEO and co-founder, says that he sees organizations with many different connected devices running on a network, and it’s difficult to manage. “We enable organizations to manage IoT devices securely at scale in a consolidated and cost-efficient manner,” Dagan told me.

This could include devices like security cameras, along with access control systems and building management systems involving thousands — or in some instances, tens of thousands — of devices. “The technology we build, we integrate with management systems, and then we deploy our capabilities which are focused on the edge devices. So that’s how we also find the devices, and then we have these different capabilities running on the edge devices or fetching information from the edge devices,” Dagan explained. 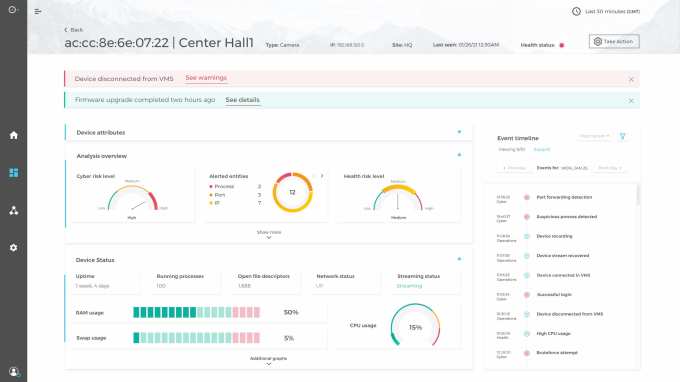 The company has formed partnerships with a number of key device manufacturers, including Microsoft, Convergint Technologies and Johnson Controls, among others. They work with a range of industries including airports, casinos and large corporate campuses.

Aaron Rosenson, general partner at lead investor Aleph, says the company is solving a big problem managing the myriad devices inside large organizations. “Until SecuriThings came along, there were these massive enterprise software categories of automation, orchestration and observability just waiting to be built for IoT,” Rosenson said in a statement. He says that SecuiThings is pulling that all together for its customers.

The company was founded in 2016 originally with the idea of being an IoT security company, and while they still are involved in securing these devices, their ability to communicate with them gives IT much greater visibility and insight and the ability to update and manage them.

Today, the company has 30 employees, and with the new investment it will be doubling that number by the end of the year. While Dagan didn’t cite specific customer numbers, he did say they have dozens of customers with deal sizes of between five and seven figures.