Tickr, an app that allows U.K. consumers to make financial investments based on their impact on society and the environment, has secured £2.5 million ($3.4 million) in funding lead by Ada Ventures, a VC which focuses on “impact” startups. The cash will be used for product development, expanding the user base, and eventually taking Tickr into other European countries from its current U.K. base.

As well as investing, the platform allows customers to spend their cash via partnerships with impact-oriented compares, and offset their carbon footprint through a subscription. The core business model is £1 p/m per customer, plus 0.30% on assets above £3,000. Additional products, like carbon offsets, for example, are charged as a separate additional subscription depending on the tier selected.

The startup says it is approaching 100,000 users in the U.K. and is reaching a millennial audience, 90% of which have “never invested before” (they say) and these users are investing £250 per month on average. 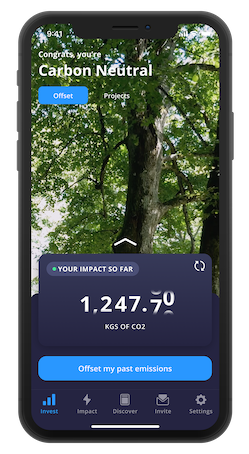 The app is not billed as a trading app, with quick “in and outs”, but is about building wealth whilst investing in a diversified portfolio of high-impact companies. Its competitors include MoneyBox, but Tickr says it is “100% pure impact focus” by contrast. The vast majority of Europeans don’t invest in markets, so this could be a good opportunity for the product.

Founders Tom McGillycuddy and Matt Latham spent eight years working in investment management, but say they became disillusioned by the jargon, high fees and indifference to causes such as the environment.

Over text interview, McGillycuddy told me: “We also realized there was zero consideration for the underlying impact of the investments people were making; it was purely about the return. Coming from Wigan and Liverpool, we were the first people in our families to be exposed to this world, and it didn’t seem right.” The pair moved into impact investing and subsequently went on to launch Tickr in 2018.