A walk is, more often than not, a solitary experience. As far as the age of COVID-19 is concerned, that’s probably more bug than feature. It’s a way to escape the confines of a shutdown for a few glorious moments, to get some air and, for better or worse, reflect on the day that’s passed or the one to come.

It can, like many things these days, however, be isolating.

For me, long weekend walks have been a sort of lifesaver throughout this bizarre year. Following two months of being completely sidelined over (non-COVID) health issues, I began walking more per week than I ever have. It was a slow process at first — frankly, never leaving my one-bedroom apartment for April and May made it so it was physically painful to walk around the block when I finally felt comfortable going outside.

These days, I walk every morning, regularly crossing the bridge into Brooklyn and Manhattan. Until I started using Apple’s new Fitness+ service a few times a day, it was easily my main source of exercise. In November, however, my Apple Watch Activity bars swapped the more generic gray for the Fitness+ yellow. But even as I’ve made a point to do a couple of indoor exercises a day, I still start each day with a walk. Rain, snow, this weekend’s sub-freezing weather — skipping a day would feel like breaking a promise to myself.

This morning Apple dropped the first five installments (episodes?) of Time to Walk. The feature is an attempt to expand the Fitness+ experience beyond the confines of its titular iOS app. A largely Watch-based experience, the feature leverages much of the wearable’s existing features (and Apple’s growing software ecosystem) to offer a more tailored and multimedia experience than you would get listening to a podcast or music alone.

As with the canny arrival of Fitness+ (December) and handwashing for watchOS (September), Apple says the timing was something of a happy coincidence. The company had been working on the feature well before COVID-19 entered the picture.

“Everything from Time to Walk and our launch of Fitness+ was something we had been working on well before COVID,” the company’s senior director of Fitness Technologies Jay Blahnik tells TechCrunch. “From the very beginning, we thought of Fitness+ as a place where everyone was welcome. We wanted it to feel like a place where, whether you’re new to fitness or very fit, there was something for everyone.”

For many, a walk (or push, in the case of those who use a wheelchair for mobility) is square one when it comes to daily workouts. For my part, I was certainly far more comfortable taking quick strolls around the neighborhood. With limits on space and no real exercise equipment to speak of beyond a kettlebell and yoga mat, attempting to approximate the gym experience at home has seemed a fool’s errand.

April found me trying some YouTube yoga classes with limited efficacy. Like most attempts to exercise, it didn’t stick. Walking every day was the only thing that did. And for the first time in my life, COVID-19 found me walking without any particular destination in mind. That old cliché about it being about the journey not the destination is fine when you don’t mind constantly being late to meetings. Walking for the sake of itself, however, changes the dynamic significantly. I speak to artists, writers and musicians on a regular basis for my podcast. The common sentiment is a familiar one: You simply can’t force creativity. But for those who make a point to regularly walk and run, it’s perhaps the most surefire way to kickstart the process.

Time to Walk is Apple’s attempt to capture some of that lightning in a bottle — to follow a rotating cast of big names as they walk through locations that mean something to them. The company says it’s been making an effort to meet guests where they are and essentially coach them through the process. The ability to do so is, of course, depends on their given location — especially with all of the sorts of travel restrictions that have been in place since early last year.

Ultimately, Apple says, the decisions of where to record are made by the guests. “Some guests said, ‘this is where I want to go,’ ” says Blahnik. “And some guests were like, ‘no, I want to to do the walk I normally do.’ For us, it’s not about Shawn Mendes in the Grand Canyon, it’s about where they want to go. Sometimes that’s limited by COVID, but what we found delightful was for many people, they loved to take the walk they loved to take.”

The first four guests — Mendes, Dolly Parton, Draymond Green and Uzo Aduba — run the gamut on approaches. “We think about the stories, we think about the diverse guest,” says Blahnik. We think about all of the ways you’d like the conversations to go. But what was important to us was that the idea resonated with them. The idea of going out for a walk, having a lovely conversation and hearing stories that could give you a different perspective.”

Parton, who turned 75 earlier this month, recorded her session in a studio — in contrast to the other three names. She relates a handful of stories largely revolving around her upbringing in Sevier County (pronounced “severe”), Tennessee. There’s a story about a Christmas tree and one about opening a literacy center with the help of her father (who struggled with his own ability to read and write).

She somewhat self-effacingly relates a story about the time her hometown erected a statue of her. “So I went home, and I said, ‘Daddy, did you know they’re putting a statue of me? Do you know about the statue down at the courthouse?’ ” Parton explains. “And Daddy said, ‘Well, yeah, I heard about that.’ He said, ‘Now, to your fans out there, you might be some sort of an idol. But to them pigeons, you ain’t nothing but another outhouse.’ ”

According to Parton, her father would visit the statue at night with a bucket of soap and water to clean the pigeons’ mess off his daughter’s likeness. Her segment culminates with something approaching a behind the music-style segment, describing stories behind three of her own songs: “Coat of Many Colors,” “Circle of Love” and “9 to 5.” The latter is the real gem of the bunch, contrasting her morning routines to costars Jane Fonda and Lily Tomlin, while describing the role her acrylic nails played in the songwriting and recording process. 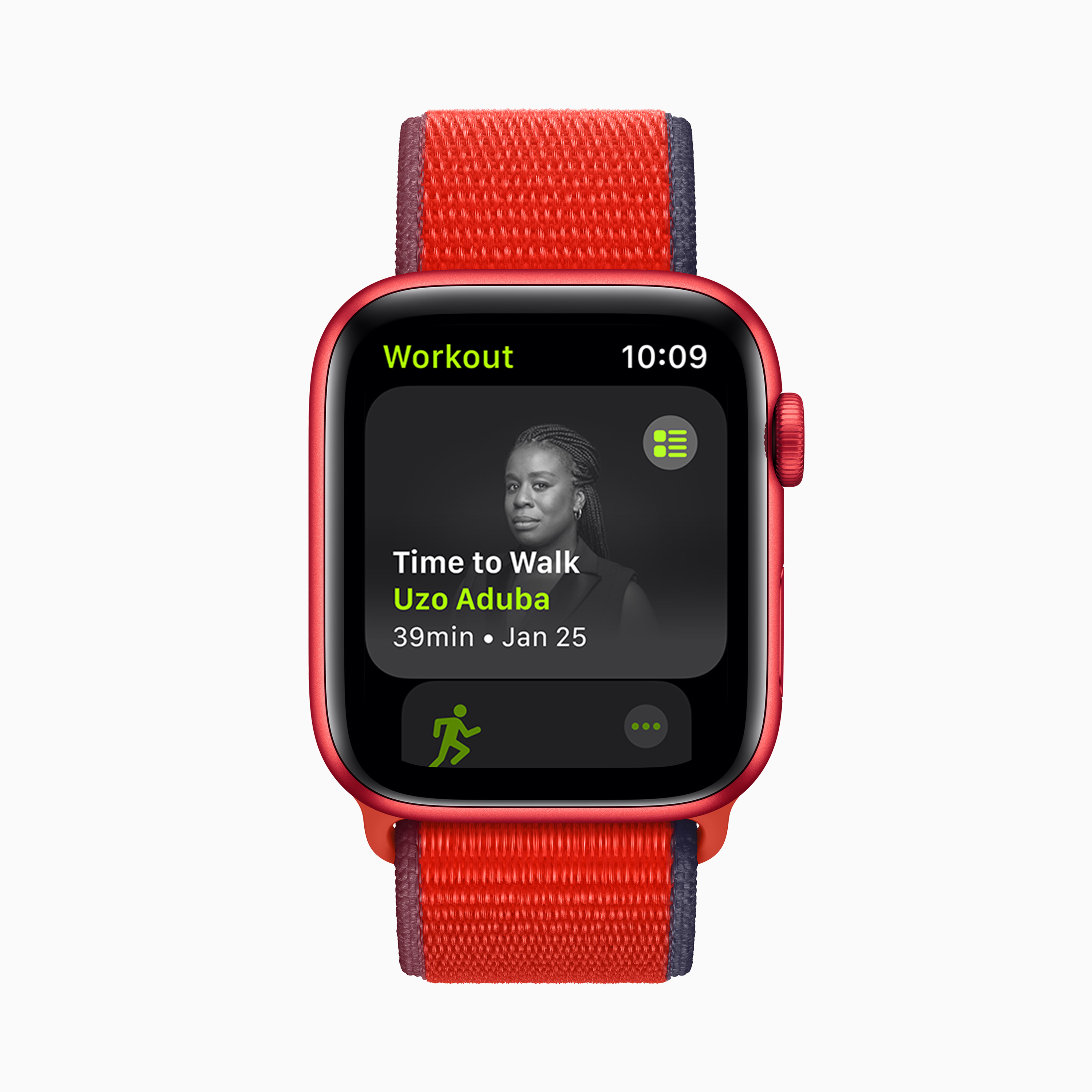 Green’s stories are more emblematic of the rest. On a walk around Malibu, the Warriors power forward discusses some inspiration stories on and off the court, from being told he would never be a star to a time he tried and failed to cheat on a test in school. The stories are purposefully personal. Aduba relates some of her own struggles to break into acting, as she walks her amusingly named dog Fenway Bark through Fort Green Park in Brooklyn.

The guests share images relating to their stories or snapshots of where they go on their walks, which are delivered to the wrist with a haptic buzz. At they end of the journey, they share three handpicked songs that can be saved to a playlist on Apple Music, similar to what the company has done for its Fitness+ workouts.

Write-ups of the Time to Walk have thus far compared it to podcasting — understandably so, given that it’s an on-demand, audio-first experience. Though the feature, which downloads directly onto the Watch when the new installment drops once a week, has its own flavor, according to Apple.

“Often podcasts are hosted,” Blahnik says, by way of distinction. “In our journey to build out this experience, we certainly considered if there should be a host walking with this person. What we realized is that, for what we were trying to create, the intimacy of having the singular guest talk to you felt a lot more like you were on a walk with them. The notion that it’s not happening in a studio (in almost all cases), that they’re walking someplace that inspires them. You’ll hear that with Draymond and Shawn — with Shawn he’s huffing and puffing up that hill and it’s kind of nice because you’re in that moment together.”

Time to Walk isn’t raw, exactly. It is an Apple production, after all. The company’s certainly not tossing out found audio here. But the content does seem more off-the-cuff than many of its productions, even as it’s packaged together with a slick intro and a trio of songs at the end. But it’s a nice change of pace for those looking for something that feels a little more personal than we’re accustom to from some of the names involved.

Your own mileage will vary, depending on, among other things, your interest in the guest. Though, there’s always a chance someone you’ve never been particularly interested in — or even heard of — will offer some unique tidbit or interesting way of looking at things. That’s one of the potential upsides of having Apple doing the curating here — there’s some interesting potential for discovery. And even in the case of artists you’re familiar with, there’s good potential to discover something new.

The weekly 20 to 45-minute audio supplement won’t make the actual act of walking any less solitary — but for a little while, at least, it’s nice to feel like someone’s along for the ride.