Despite a pandemic that sparked a global recession, 2020 was still a record year for venture capital investments into American startups.

According to data shared by PitchBook and the National Venture Capital Association, investors poured $156.2 billion into domestic startups last year, or around $428 million for each day of the year. The huge sum of money, however, was itself dwarfed by the amount of liquidity that American startups generated, some $290.1 billion.

The exit-value figure was a record as well, as were the 321 rounds worth $100 million — nearly one for each day of the year.

But while the U.S. venture capital market in 2020 was hot, it was not newly so. In 2018 and 2019, VCs invested around $140 billion into domestic startups, making last year’s $156 billion result a record, but not a shocking departure from previous years.

A first read of the data indicates that the U.S. venture capital market is still getting larger in scale and later-stage in focus. But inside those well-worn trends are a host of notable movements that both underscore what we observed last year in real-time and teach us something new about today’s venture capital market.

So far, 2021’s startup financing and exit market appears to be the mirror of what we saw in late 2020. So we’d best understand the past so we can forecast what we’ll see in Q1 of 2021.

To avoid getting too lost in the data, we’ll proceed by stage, pulling out key facts for each step of the startup lifecycle. Feel free to scroll to the one that makes the most sense for where your company is or where your fund invests.

In the U.S., seed deal count was high in 2020, around 5,227 per PitchBook’s estimates. Those rounds were worth just over $10 billion, making it the third year in a row in which American seed-stage startups managed around $10 billion in capital against around 5,000 rounds.

Boring, yeah? Not really. Inside those numbers are the whole year’s ups and downs: The fact that the seed data is so close to 2018 and 2019 levels is almost silly. 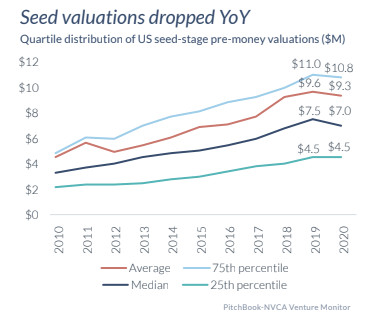 The real surprise from seed, per PitchBook’s report, is that these valuations actually fell on a year-over-year basis in 2020. This, despite the fact that seed deal sizes rose.

Considering these two trends at once, it appears likely that, on average, VC ownership as a percentage of seed-stage companies rose in 2020.

Frankly I was just surprised to see a form of startup valuation decrease after expanding for nearly a decade.