A GitHub internal investigation has revealed the company made “significant errors of judgment and procedure” in the firing of the Jewish employee who cautioned his coworkers about the presence of Nazis in the D.C. area on the day of insurrection at the U.S. Capitol.

In a blog post today, GitHub COO Erica Brescia said the company’s head of HR took full responsibility for what happened and resigned from the company yesterday. GitHub did not disclose the name of the person who resigned, but it’s widely known that Carrie Olesen was the chief human resources officer at GitHub.

In a tweet last night, GitHub’s senior director of global HR services, Gia Colosi, made some comments about the company and human resources. That tweet has since been deleted but the screenshot is below. 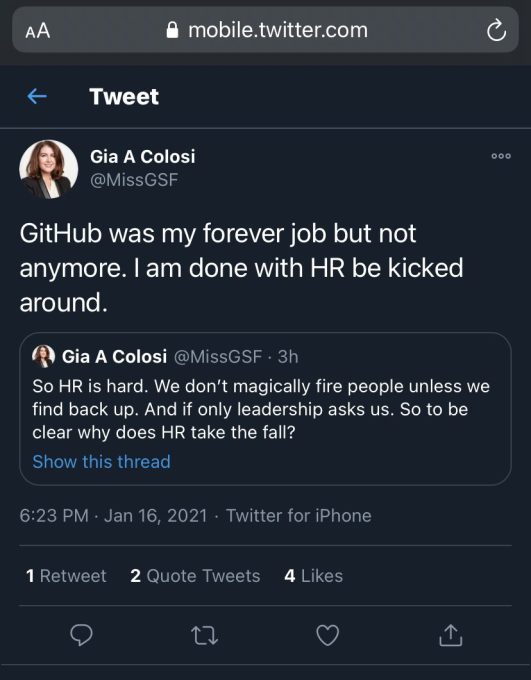 In a later tweet, she went on to say that, “Women are in HR to clean up men’s messes. I done and tired.” 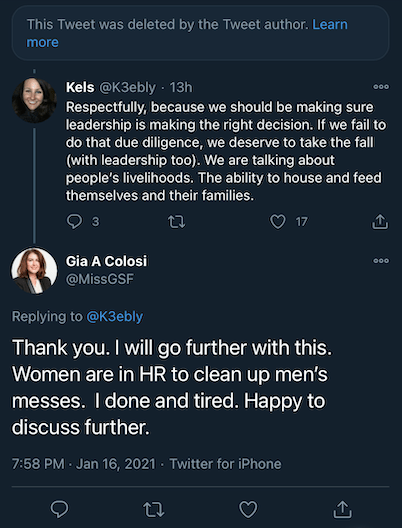 Meanwhile, GitHub says it has “reversed the decision to separate with the employee” and is talking to his representative.

“To the employee we wish to say publicly: We sincerely apologize,” Brescia said in the blog post.

After the fired employee made a comment in Slack saying, “Stay safe homies, Nazis are about,” a fellow employee took offense, saying that type of rhetoric wasn’t good for work, the former employee previously told me. Two days later, he was fired, with a human relations representative citing a “pattern of behavior that is not conducive to company policy” as the rationale for his termination, he told me.

In an interview with TechCrunch earlier this week, the now-former employee said he was genuinely concerned about his co-workers in the area, in addition to his Jewish family members. During that interview, he said he would not be interested in getting his job back, but would be interested in other forms of reconciliation.


Got a tip? Contact us securely using SecureDrop. Find out more here. You can also reach this author via Signal at 415-516-5243