Another Uber spinout is in the works.

Postmates X, the robotics division of the on-demand delivery startup that Uber acquired last year for $2.65 billion, is seeking investors in its bid to become a separate company, according to several people familiar with the plans.

The startup is being referred to as Serve Robotics, a nod to the yellow and black-emblazoned autonomous sidewalk delivery bot that was developed and piloted by Postmates X. The Serve robot, which recently partnered with Pink Dot Stores for deliveries in West Hollywood, will likely be the centerpiece of the new startup.

Under the deal, which is being shopped to investors, the company would be run by Ali Kashani, who heads up Postmates X and leads the Serve program. Anthony Armenta would lead the startup’s software efforts and Aaron Leiba would be in charge of hardware — keeping the same positions they hold at Postmates X.

Uber would retain an ownership stake in Serve Robotics and maintain a commercial agreement with the startup. Serve would get the IP and assets in exchange. Uber is in discussions to retain about a 25% stake in the new startup, according to one source familiar with the deal.

There is not a legal entity — as of yet — named Serve Robotics. However, a website domain serverobotics.com was registered January 6.

The spinoff would be in line with Uber’s streamlined business strategy that began to take shape after its public market debut in May 2019 and accelerated last year as the COVID-19 pandemic put pressure on the ride-hailing company. Two years ago, Uber had enterprises across the transportation landscape, from ride-hailing and micromobility to logistics, public transit, food delivery and futuristic bets like autonomous vehicles and air taxis. CEO Dara Khosrowshahi has dismantled the everything-but-the-kitchen-sink approach as he pushes the company toward profitability.

In 2020, Uber offloaded shared scooter and bike unit Jump in a complex deal with Lime, sold a stake worth $500 million in its logistics spinoff Uber Freight and rid itself of its autonomous vehicle unit Uber ATG and its air taxi play Uber Elevate.

Aurora acquired Uber ATG in a deal that had a similar structure to the Jump-Lime transaction. Aurora didn’t pay cash for Uber ATG. Instead, Uber handed over its equity in ATG and invested $400 million into Aurora, which gave it a 26% stake in the combined company.

In a similarly crafted deal, Uber Elevate was sold to Joby Aviation in December.

Delivery remained the one area in which Uber has invested. The company, seeing an opportunity as demand skyrocketed for its Uber Eats delivery service, started looking for an acquisition to strengthen its position. Uber tried and failed to buy Grubhub, losing out to European heavyweight Just Eat Takeaway.

Uber landed on Postmates and in July 2020 agreed to buy the delivery startup in an all-stock deal valued at $2.65 billion. The deal closed in December.

Postmates’ exploration into sidewalk delivery bots began in earnest in 2017 after the company quietly acquired Kashani’s startup Lox Inc. As head of Postmates X, the company’s R&D arm, Kashani set out to answer the question: why move two-pound burritos with two-ton cars?

Postmates revealed its first Serve autonomous delivery bot in December 2018. A second generation — with an identical design but different lidar sensors and few other upgrades — emerged in summer 2019 ahead of its planned commercial launch in Los Angeles. 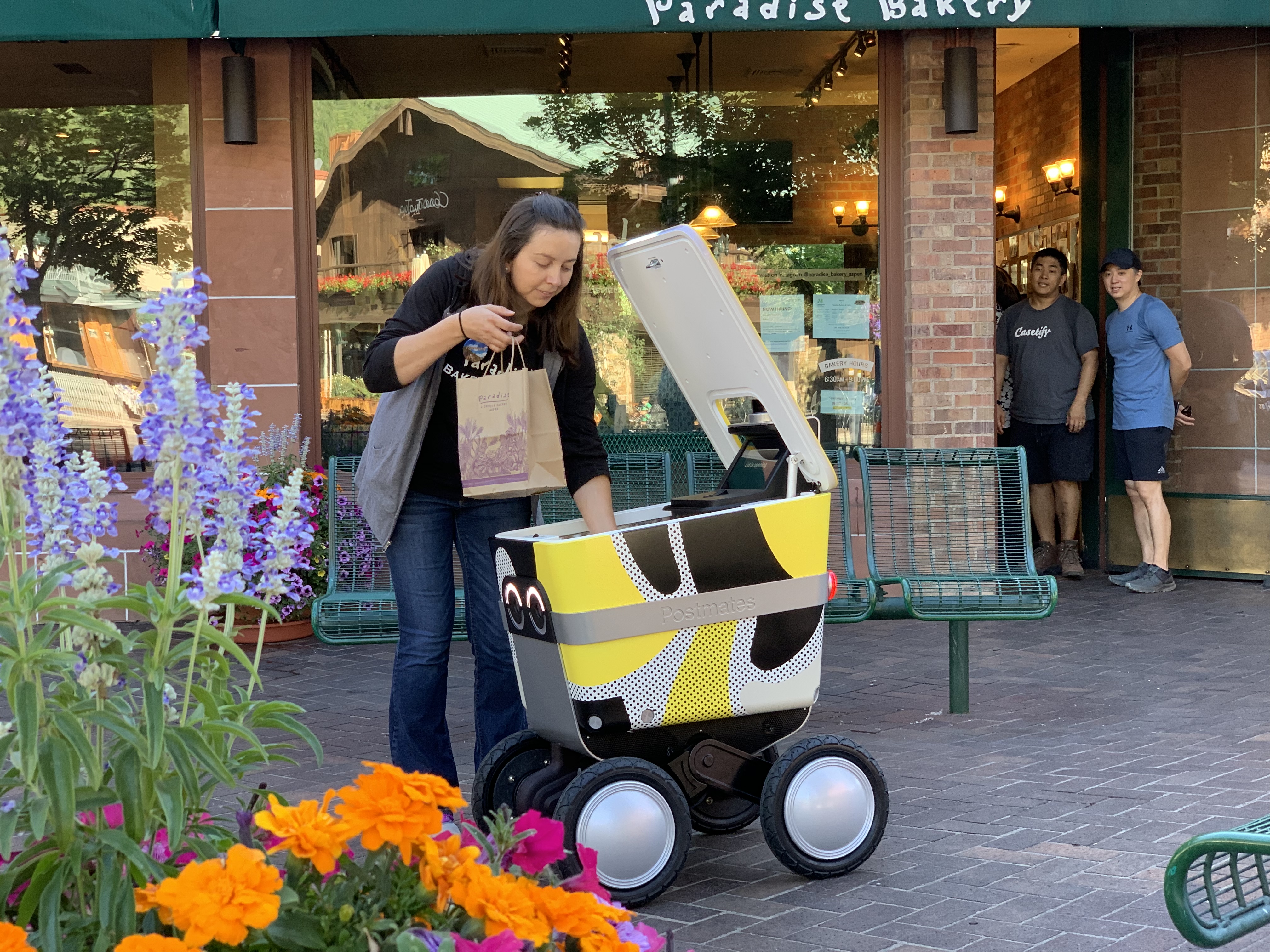 Instead of working with a partner, Postmates used its own delivery data to form the foundation of how it would design and deploy a sidewalk bot, according to comments Kashani made during a TC Sessions: Mobility 2020 event in October.

“When you look at the data and see that over half of deliveries are within a short distance it becomes a no brainer — these robots can actually complete them,” Kashani said at the time, in reference to the application of autonomous delivery bots for delivery.

The Postmates X used historical delivery data from the company to develop a simulation, which was then used in the design of the Serve bot. It helped the team determine what battery life would be needed and the size of the cargo hold, among other features.

The bot only represented a sliver of Postmates’ delivery business. However, the company has seen an increased interest in the bot in Los Angeles and San Francisco — the two cities where it commercially operates — as COVID-19 fueled demand for contactless delivery.

Kashani noted back in October that the bots had completed thousands of deliveries in Los Angeles and was preparing to expand into the city’s West Hollywood enclave. That expansion launched late last year with a twist. The Serve robots were changed to a bright pink to match the signature color of the Pink Dot stores.