Of course COVID-19 was bound to be an unavoidable topic during the first-ever all-virtual CES. After all, the topic is at front of mind regardless of the topic these days. Close to a year into the pandemic, presenters still understandably feel obligated to address the always-present elephant in the room. Sometimes it was as simple as acknowledging the strangeness of moving from the Las Vegas Convention Center to a Microsoft-powered virtual venue. Other times it felt far more forced.

When it comes to the technology itself, there’s no doubt that the pandemic is going to have a profound effect on the industry for years to come, from health measures to remote work setups. Sometimes it’s a genuinely organic evolution aimed at adapting technology to an ever-changing world. In other cases, it can feel far more exploitative — like the consumer electronics equivalent to a beer commercial discussing “these uncertain times.”

I’ve written a lot about how the pandemic will impact robotics and AI going forward. The short version is that companies will no doubt be more enthusiastic about embracing these technologies, after bumping up against the limitations of a human workforce with a deadly and highly contagious virus spreading across the world.

We saw some glimpses of robotics’ response. Though there tends to be a far longer lead time than in the consumer category. The clearest and most immediate example had to be the prevalence of UV outfitted robotics. LG, Ubtech and Ava Robotics all bombarded my inbox with their take on the category. The desire for disinfecting technology should be clear during a pandemic, and robotics offer both a way to automate a dull and repetitious process like this, while removing a potential human viral vector from the equation. 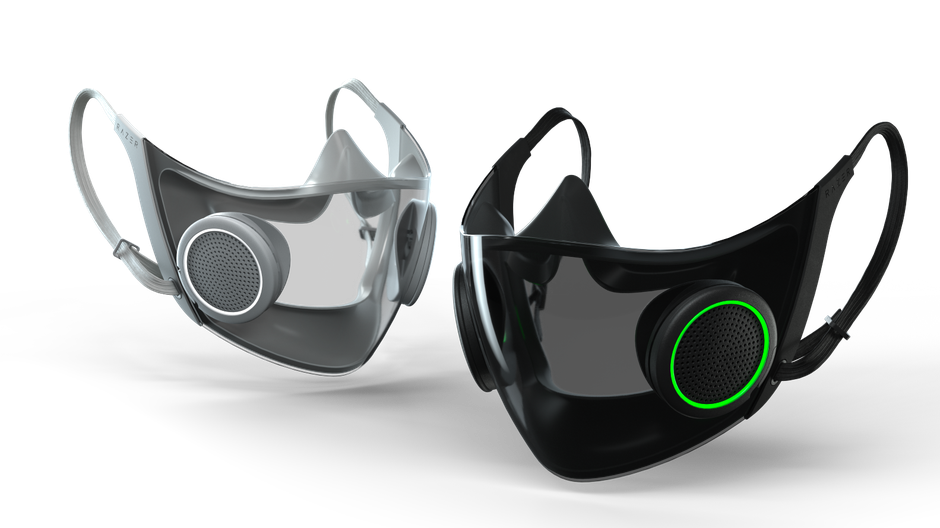 UV disinfecting made appearances in a number of other form factors. Phones have been a target for the tech for a few years now. After all, it didn’t take COVID-19 to teach us that smartphones are mobile petri dishes we watch TikToks on. Products like CleanPhone from Canadian startup Glissner are looking to enter a space that’s been thus far dominated by PhoneSoap, which was genuinely ahead of the curve on the phenomenon.

Targus’s keyboard may well have been the most widely reported-on UV solution of the show, because, well, it’s a bit wacky, with an ultraviolet lamp that sits above it.

Masks are another piece of the puzzle that have slowly been infiltrating the show, but really hit a fever pitch this year. Obviously wearing a face mask in public is only a new phenomenon in some countries — in other parts of the world like East Asia it’s long been a normal part of life. Last year, Portland-based Ao Air grabbed some headlines with its own take on the category.

Razer’s Project Hazel was undoubtedly the most prominent mask to debut at the show. It’s big and flashy and a bit of a diversion for a company that primarily trades in gaming peripherals. The N95 mask sports LEDs to indicate charging status and make the wearer’s face visible in dark surroundings. There’s also technology built in to make the wearer’s voice clearer. For the moment, however, it’s hard to see them as much beyond a headline grabber.

One piece I genuinely expected to see more of was remote work. We caught glimpses, like the Dell monitor with Microsoft Teams conferencing built in. Microsoft pitched its new Surface as a remote work machine, but frankly, it didn’t feel any more targeted at that vertical than any other portable Surface.

No doubt many of the innovations companies are working on will have to wait until CES 2022. Fingers crossed, we’ll see them next year in Vegas.