CFOs are the supposed omniscient owners of a company. While the CEO sets strategy, messages and builds culture, the CFO needs to know everything that it is going on in an organization. Where is revenue coming from, and when will it arrive? How much will new headcount cost, and when do those expenses need to be paid? How can cash flows be managed, and what debt products might help smooth out any discontinuities?

As companies have migrated to the cloud, these questions have gotten harder to answer as other departments started avoiding the ERP as a centralized system-of-record. Worse, CFOs are expected to be more strategic than ever about finance, but can struggle to deliver important forecasts and projections given the lack of availability of key data. CMOs have gotten a whole new software stack to run marketing in the past decade, so why not CFOs?

For three Palantir alums, the hope is that CFOs will turn to their new startup called Mosaic. Mosaic is a “strategic finance platform” that is designed to ingest data from all sorts of systems in the alphabet soup of enterprise IT — ERPs, HRISs, CRMs, etc. — and then provide CFOs and their teams with strategic planning tools to be able to predict and forecast with better accuracy and with speed.

The company was founded in April 2019 by Bijan Moallemi, Brian Campbell and Joe Garafalo, who worked together at Palantir in the company’s finance team for more than 15 years collectively. While there, they saw the company grow from a small organization with a bit more than one hundred people to an organization with thousands of employees, more than one hundred customers as we saw last year with Palantir’s IPO and incoming revenue from more than a dozen countries.

Strategically handling finance was critical for Palantir’s success, but the existing tools in its stack couldn’t keep up with the company’s needs. So Palantir ended up building its own. We were “not just cranking away in Excel, which is really the default tool in the toolkit for CFOs, but actually building a technical team that was writing code, [and] building tools to really give speed, access, trust and visibility across the organization,” Moallemi, who is CEO of Mosaic, described.

Most organizations can’t spare their technical talent to the CFO’s office, and so as the three co-founders left Palantir to other pastures as heads of finance — Moallemi to edtech startup Piazza, Campbell to litigation management startup Everlaw and Garafalo to blockchain startup Axoni — they continued to percolate on how finance could be improved. They came together to do for all companies what they saw at Palantir: build a great software foundation for the CFO’s office. “Probably the biggest advancements to the office of the CFO over the last 10 years has been moving from kind of desktop-based Excel to cloud-based Google Sheets,” Moallemi said.

So what is Mosaic trying to do to rebuild the CFO software stack? It wants to build a platform that is a gateway to connecting the entire company to discuss finance in a more collaborative fashion. So while Mosaic focuses on reporting and planning, the mainstays of the finance office, it wants to open those dashboards and forecasts wider into the company so more people can have insight into what’s going on and also give feedback to the CFO. 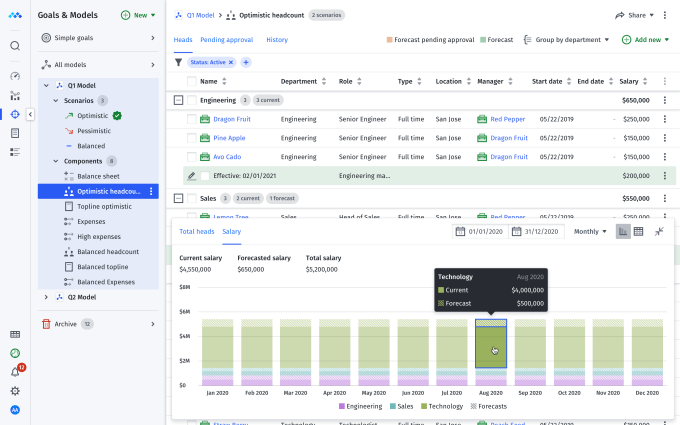 There are a handful of companies like publicly traded Anaplan that have entered this space in the last decade. Moallemi says incumbents have a couple of key challenges that Mosaic hopes to overcome. First is onboarding, which can take months for some of these companies as consultants integrate the software into a company’s workflow. Second is that these tools often require dedicated, full-time staff to stay operational. Third is that these tools are basically non-visible to anyone outside the CFO office. Mosaic wants to be ready to integrate immediately, widely distributed within orgs, and require minimal upkeep to be useful.

“Everyone wants to be strategic, but it’s so tough to do because 80% of your time is pulling data from these disparate systems, cleaning it, mapping it, updating your Excel files, and maybe 20% of [your time] is actually taking a step back and understanding what the data is telling you,” Moallemi said.

That’s perhaps why its target customers are Series B and C-funded companies, which no doubt have much of their data already located in easily accessible databases. The company started with smaller companies, and, Moallemi said, “We’ve been slowly inching our way up there over the last 12 months or so working with larger, more complex customers.” The company has grown to 30 employees and has revenues in the seven figures (without a sales org, according to Moallemi), although the startup didn’t want to be more specific than that.

With all that growth and excitement, the company is attracting investor attention. Today, the company announced that it raised $18.5 million of Series A financing led by Trevor Oelschig of General Catalyst, who has led other enterprise SaaS deals into startups like Fivetran, Contentful and Loom. That round closed at the end of last year.

Mosaic previously raised a $2.5 million seed investment led by Ross Fubini of XYZ Ventures in mid-2019, who was formerly an investor at Village Global. Fubini said by email that he was intrigued by the company because the founders had a “shared pain” at Palantir over the state of software for CFOs, and “they had all experienced this deep frustration with the tools they needed to do their jobs.”

Other investors in the Series A included Felicis Ventures, plus XYZ and Village Global.

Along with the financing, the company also announced the creation of an advisory board that includes the current or former CFOs from nine tech companies, including Palantir, Dropbox and Shopify.

Many functions of business have had a complete transformation in software. Now, Mosaic hopes, it’s the CFO’s time.