One in five people have a mental health illness. Pace, a new startup founded by Pinterest and Affirm executives, wants to pay attention to the other four in that statistic.

While diagnosable mental health conditions might get an individual medication or therapy, those that live in a grey space might still need resources to stay afloat. After Chou experienced the detrimental effects of burnout while working for Pinterest and Affirm, and co-founder Cat Lee, formerly of Pinterest and Maveron, experienced a personal travesty, the former colleagues realized there needed to be a way to help people who didn’t fit squarely into one bucket.

So Pace, which launched out of private beta today, wants to address this fallacy by creating small-group training classes for people interested in taking care of their emotional and mental health. It is launching with $1.9 million in seed funding. Investors include Nellie and Max Levchin, Jeff Weiner, Emilie Choi, Ben Silbermann, Box Group, and SV Angel.

The core of the product is a 90-minute live video group session once a week, delivered through Pace’s platform. The video component integrates with Twilio and Agora (and interestingly, not Zoom, because its SDK lacks personalization options). Users can attend the sessions on Web, iOS or Android. 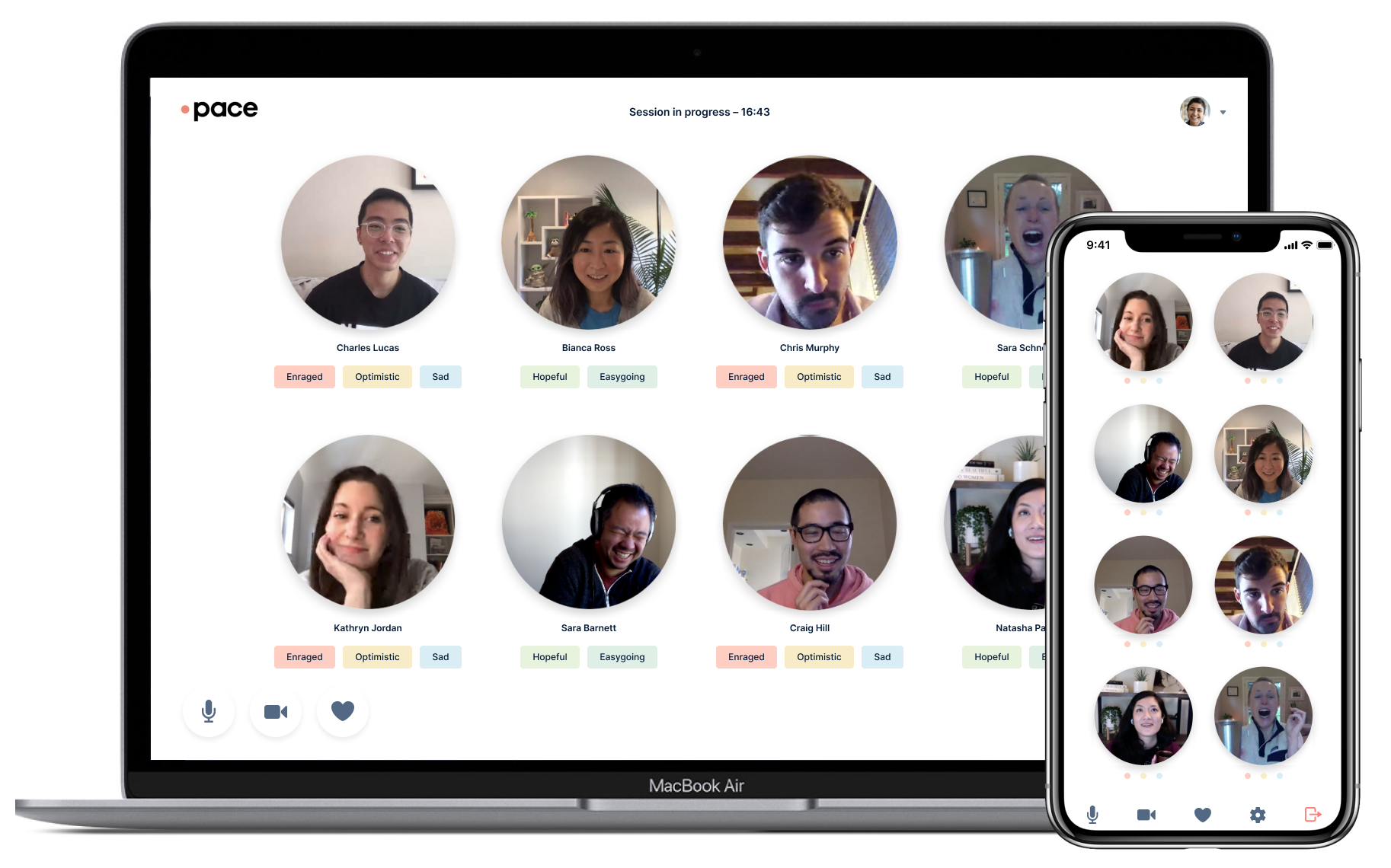 Pace forms cohorts of eight to 10 people around shared interest or identities, such as a founder group or parent group. Then, Pace interviews a new user for 15 to 30 minutes to learn about what they hope to get out of the experience.

Once a group is formed, they meet weekly with a facilitator at the helm. While it’s not trying to be a therapy replacement, the startup is looking for facilitators who are licensed in mental health practice. To help them do this, Pace secured two founding members who are psychologists: Dr. Kerry Makin-Byrd and Dr. Vivian Oberling.

When users sign on, they are prompted to pick three words that describe themselves from dozens of options. Those words show up under their video as they talk, and help skip some small talk in the beginning of the sessions. 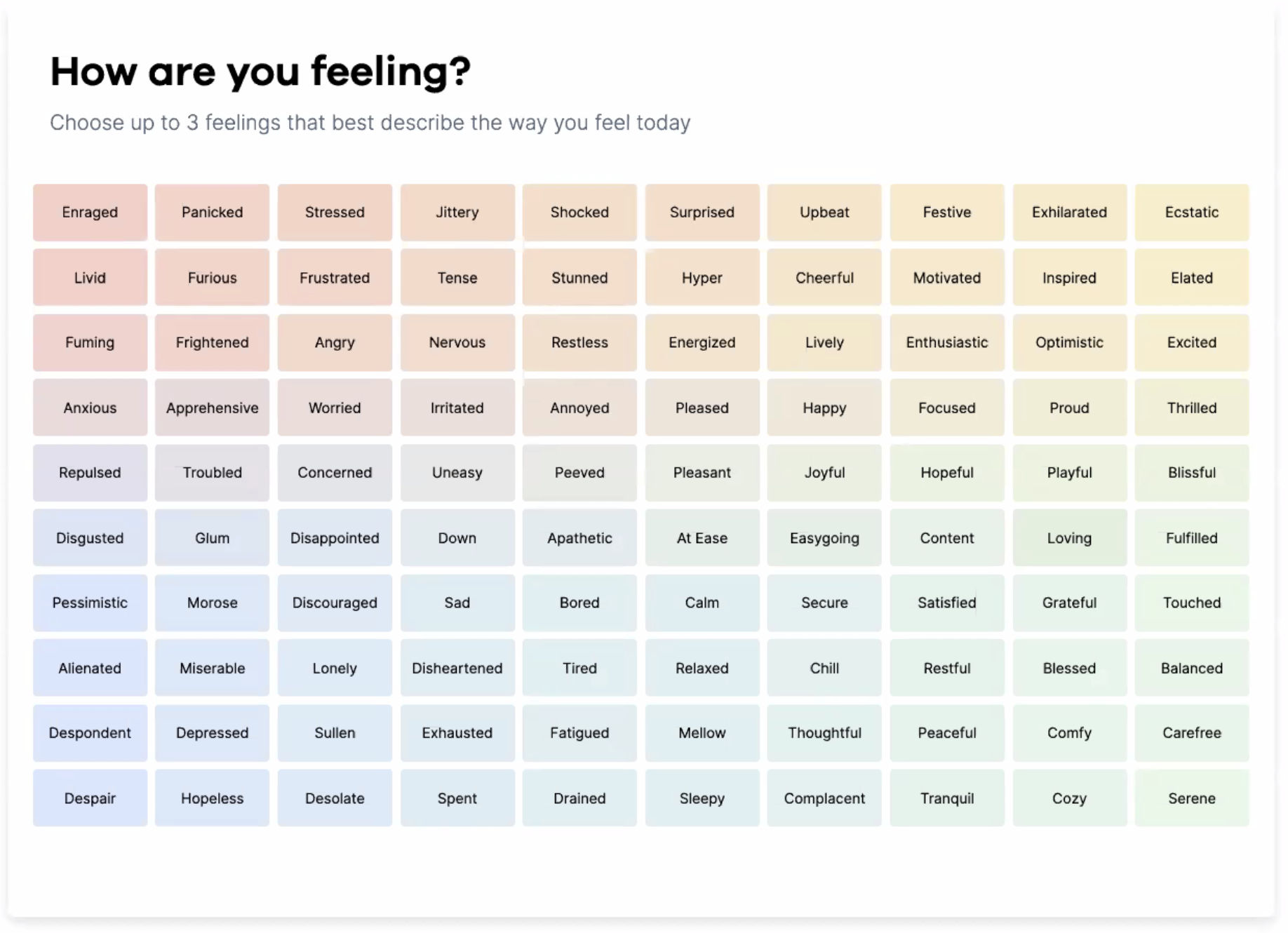 The group talks about a variety of topics, from how to manage stress to how to adapt to a remote world. There is no formal curriculum, but each class has a takeaway for participants to leave with.

Pace doesn’t follow any specific curriculum during the meetings, but instead uses the time for people to talk through their feelings. Facilitators are licensed mental health clinicians, with the majority of the leaders being part-time or freelancers. It plans to introduce asynchronous ways for group members to chat and stay in touch beyond the weekly class, as well as spend time building out a product that feels beyond a Zoom call.

Mental health software startups are on a tear right now. Last month, Lyra Health raised $175 million at a $2.25 billion valuation to connect employees to therapists and mental health services. Another telehealth provider, Talkspace, announced today that it was going public through a SPAC. There’s also Calm, last valued at $2 billion, and Headspace, its biggest competitor in the mindfulness app space.

Pace’s focus is more similar to the latter than the former: It’s avoiding the telehealth label and positioning itself more as supplementary to formal health services.

“Our hope is that as [therapists] have individual patients who they’d like to incorporate some group work, or need a next thing, that we’re here for that too,” says Chou.

One of Pace’s closest competitors is Coa, which launched with $3 million in seed funding in October 2020. The startup is similarly using small-group fitness culture and applying it to mental health. It mixes lecture-style teaching with breakout sessions to breed conversation.

Pace wouldn’t expand on how it differentiates from Coa beyond alluding to upcoming product features and community investments. Coa charges $25 for drop-in classes (sticking to that fitness class theme) while Pace charges $45 per week for the same group to meet for months at a time. While Coa has licensed therapists, Pace has licensed mental health clinicians.

Coa co-founders Alexa Meyer and Dr. Emily Anhalt say their service is unique from Pace in a curriculum perspective.

“Although all of Coa’s classes are facilitated by licensed therapists, Coa’s classes are different from group therapy,” Meyer said. Coa uses Anhalt’s research around mental happiness to create programming. Both companies are still pre-launch, but Coa says it has 6,000 people on its waitlist.

For both startups, the hurdles ahead are common for any startup: customer acquisition, effectiveness in tracking outcomes and scaling an innately emotional and personalized experience. As Homebrew’s Hunter Walk pointed out in a recent blog post, vulnerable populations being exposed to venture-level risk is a difficult phenomenon. Startups fail often, and in this case, that could mean leaving without once-critical support people who are depending on group therapy.

Going forward, the real winner in the mental health fitness space will come down to a thoughtful curriculum and a user experience that brings out vulnerability in people even over a virtual setting. Regardless, innovation pouring into the sector couldn’t come at a better time.

Mental wellness platform Lyra Health is raising up to $175M at a $2.25B valuation