Cable or fiber. For the vast majority of American homes, there’s no choice of how customers get their internet access. If you’re lucky to live in some dense urban areas with amenable landlords, that “or” might become an “and.” Yet, as more and more people rely on the internet for more than just cat photos (and after recent events, maybe rely on cat photos as well for sustenance), it seems obvious the market needs more choice and competition.

Utah-based WeLink wants to be that alternative. Taking advantage of advances in 5G in the millimeter spectrum as well as rapidly declining hardware costs, the startup is pioneering a mesh network of wireless base stations that can transmit high-bandwidth signals across entire neighborhoods at relatively cheap infrastructure installation costs.

It’s a paradigm that caught the eye of investors, with Digital Alpha Advisors, a longtime telecom VC with close ties to Cisco, investing $185 million into the company in equity as well as a debt facility in exchange for revenue share (sort of the hardware version of SaaS securitization). It dubbed the latter an “outcome-based financial structure.” Rick Shrotri and Neil Sheridan from Digital Alpha will join WeLink’s board.

The startup was founded by CEO Kevin Ross and CTO Ahsan Naim in 2018. Ross had been interested in wireless internet since 2005, but the technology was early — and very expensive. “I was 20 years ahead of my time or [maybe] 15 years, and so it was an exercise in frustration waiting for the technology to actually commercialize,” Ross said. He built one company in the space, eventually selling it to Vivint, a smart home company that was owned by Blackstone and which went through a reverse merger with a SoftBank unit last year for $6.5 billion. The buyer at Vivint was Luke Langford, who left to work on another startup called Lucid Software before joining WeLink more recently as president and COO. 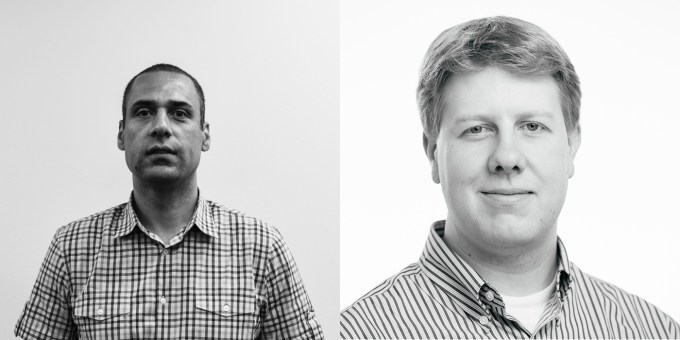 Now, wireless internet has been a story many of us have followed for more than a decade, with few notable success stories. Ross is convinced though that the combination of reliable millimeter-wave 5G (at around 60-70 Ghz) plus dramatically cheaper hardware costs has finally opened the door to high-quality wireless internet for the first time. (It’s probably good to note that TechCrunch is editorially independent from our ultimate parent company Verizon, which obviously has a fiber customer or two.)

WeLink’s technology uses a mesh architecture, which means that signals can be bounced between different base stations as necessary throughout a neighborhood in order to reach a “point of presence” station with a fiber connection. For the typical single-family home installation, a small base station (Ross says about four inches by four inches) is installed on the roof “similar to a satellite dish” and a single cable is run down to connect to the home’s router or Wi-Fi station. 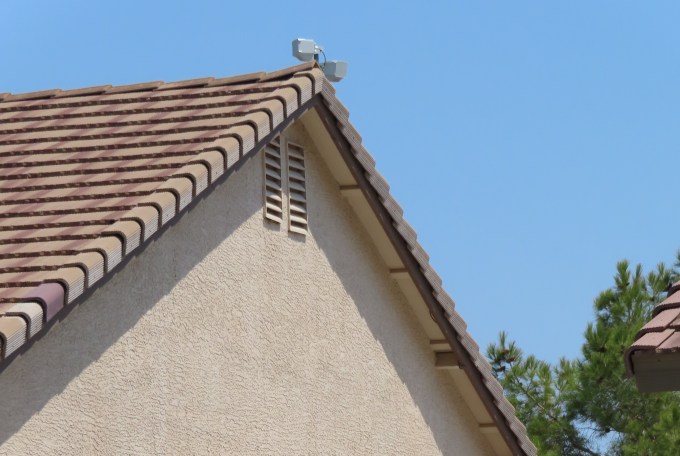 WeLink’s base station on a home roof. Photo via WeLink.

Ross says that WeLink doesn’t need a lot of density to reach ubiquity. “We don’t need much — a couple of percentage points in a neighborhood of take rate … and that actually ends up giving us blanket coverage. What happens is we will typically get north of 5% very quickly.” Once a neighborhood has an ever higher rate of, say, 10%, “There’s so much redundancy there,” Ross said. The company says it offers “Up to 940 Mbps Download/Upload,” although of course, your mileage will vary in reality. That bandwidth is symmetrical unlike cable internet, which should be good for video broadcasting and large file uploads in this remote-work world.

He also noted that the company doesn’t need a lot of approvals from cities in order to launch, which has historically been a large barrier to new internet connectivity startups. “There’s no permitting required other than at our fiber points of presence where we’re broadcasting from, but those are minimal.”

WeLink’s first launch neighborhoods are in Henderson, Nevada outside Las Vegas, and the company is expanding into Arizona with installations in Tucson and Phoenix. The company intends to expand to 10 markets in the coming years. Ideal markets tend to be suburban neighborhoods and subdivisions where there is enough density to make the mesh network work but with a built environment that doesn’t prevent line-of-sight between antennas. “We’re kind of primarily focused on bedroom communities, the doughnut around the urban core in big cities,” Ross said. 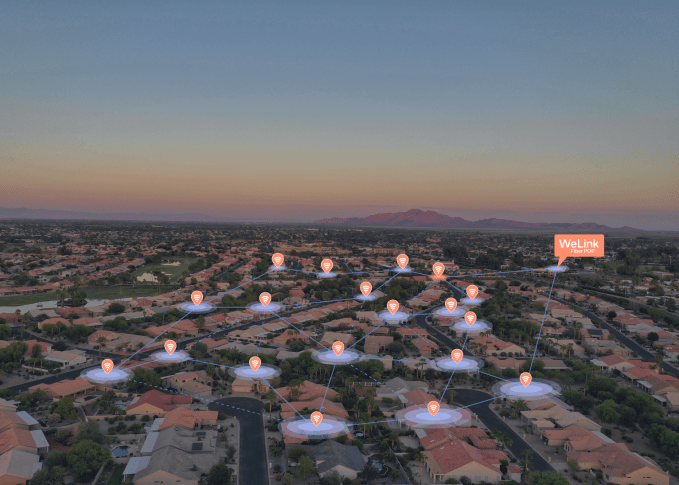 WeLink’s marketing concept art on how its base stations connect with each other in a neighborhood. Photo via WeLink.

Pricing is $80 per month on a month-to-month plan, and $70 per month with a two-year contract. After two years, the price drops $10 per month in what Ross described as a “loyalty discount.”

On the investment side, Langford the COO noted Digital Alpha Advisors’ Cisco connections as a key consideration for the company. “There is an affiliation with Cisco, and being an internet service provider, it’s nice to be able to punch above our own weight as a startup and still have dialogue with the leaders in networking technology, so certainly that was something that was attractive to us,” he said. “They were comfortable with a business that has atoms, not just bits.” As for the debt model, Langford said that “There’s some advantages to not having as much dilution … but also have capital to make sure that we can go add customers.”

Obviously there are other internet wireless startups out there, the most prominent these days given its backer being satellite-based ISP Starlink. Ross noted that he doesn’t really see the company as a competitor, since WeLink’s bandwidth is significantly higher and more reliable given its 5G mesh architecture. He sees Starlink competing much more heavily for the rural market, where many other internet connectivity technologies like cable and fiber are less viable.

It’s a lot of venture money, a serious bet in the 5G space, and hopefully for families fighting on Zoom for pixels, an opportunity to get more competition for high-bandwidth internet.