A Twitter spokesperson has confirmed with TechCrunch this morning that Trump has deleted three tweets that led to the temporarily suspension of this account last night.

Twitter locked the account pending deletion of the offending tweets on Wednesday following the riot and siege of the Capitol building in Washington, D.C., and said that the suspension would remain in place so long as the tweets were not removed, and that any further violation of its rules could result in an actual permanent account suspension for Trump.

The President’s account is to remain locked 12 hours after his deletion of the tweets (seen below). While we don’t have exact timing on when the countdown started, he has yet to tweet from the account. The account also still bears the warning that, “this Tweet is no longer available because it violated the Twitter Rules.” 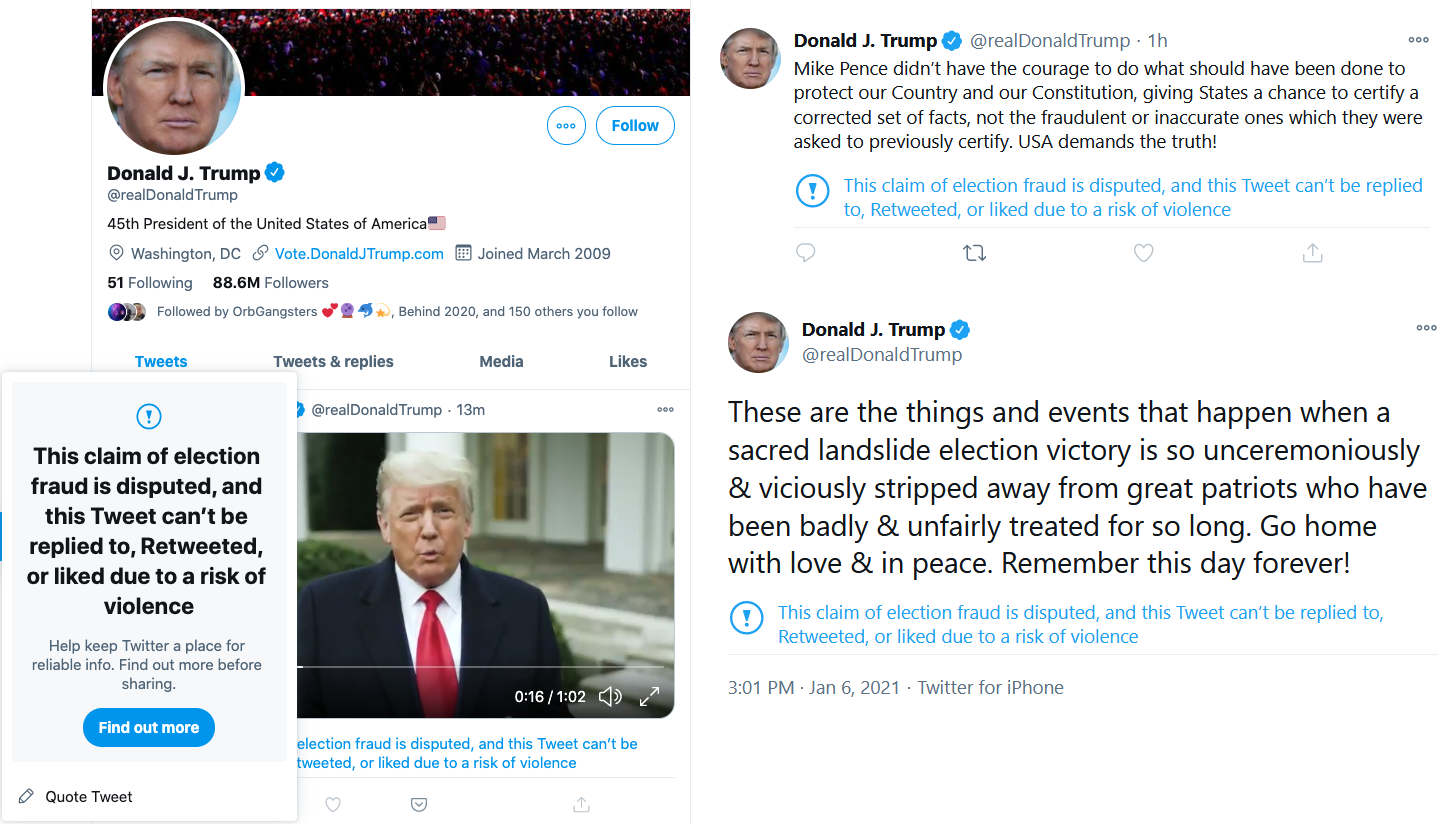 While Trump has previously enjoyed the benefit of a rule Twitter put in place that allowed a special exemption for content that would normally violate its terms of service. The exempted content would be allowed to remain in the interest of public access in cases where it comes from accounts with a significant public interest component, like Trump’s while he’s occupying the office of U.S. president.

The three tweets that finally proved a bridge too far for Twitter included a video posted by Trump that called for an end to the violence on Capitol Hill, but that also said “We love you, you’re very special” to the terrorists taking part in the action. The other two included statements that falsely suggested the legitimate results of the most recent U.S. presidential election were somehow fraudulent, including one that suggested the terrorist actions in Washington that resulted were somehow justified.

It’s worth noting that Twitter didn’t actually delete the offending tweets; the company generally has a policy of removing tweets that violate its terms from public view and notifying the offending account that they must be deleted by the account holder themselves in order to reinstate the ability to actively use the account.

While Trump does not have access to his own official Twitter account, his deputy chief of staff Dan Scavino posted a statement early Thursday morning about the electoral vote certification process, which was completed in the early hours. The statement again included inciting language falsely disputing the election results, but remains available and untouched by any of Twitter’s flagging measures.

Until this week, most anticipated that Trump would continue to enjoy protections that come with his political status. Yesterday’s move marked a shift for Twitter, but there remains a major question around his status in the remaining two weeks of his presidential term. Facebook, meanwhile, has taken the opposite action, altogether banning Trump from its platform, for “at least the next two weeks.”

Trump’s ability to maintain his favorite platform will hinge on whether Twitter determines that he has crossed the line one final time.