More than two years ago, Ludwig Schoenack, Nikolaus Volk and Francesco Wiedemann looked at the bevy of scooter services, ride-hailing apps, public transit and car-sharing options available in most urban centers in the United States and saw a gap in the mobility market.

Consumers who didn’t want to own a car, but needed one for a few days or weeks had two options: head to a car rental center, likely located at an airport or outside the city center, or turn to a car-sharing platform. The three friends — all German immigrants whose paths had crossed in San Francisco — decided to pool their collective expertise from BMW, McKinsey and Uber and launch Kyte to create a new kind of car rental experience without taking on the costly business of owning and maintaining large fleets.

Kyte built a fleet-logistics platform that lets consumers rent vehicles through their app or website. The vehicles, which are located in hubs throughout a city center, are delivered by gig economy workers right to the renters’ home. Kyte also handles the pickup and refuels the vehicle for no extra charge.

“We still believe people own cars because they want it outside their door, so we thought why don’t we put it right there,” Schoenack said in a recent interview.

Kyte partners with car rental firms and other companies that manage fleets, allowing the startup to focus on consumers and the tech.

The startup, which was founded in late 2018 and launched its first services in February 2019, has caught the attention of capital of investors. The startup said Tuesday it has raised $9 million in funding from DN Capital and Amplo VC. Numerous individual investors from the mobility industry also participated, including former Uber executives Ed Baker, Jörg Heilig, Josh Mohrer and William Barnes, as well as Lime co-founder Toby Sun and Kayak and Travelocity co-founder Terry Jones.

The funds are already being put to work to help drive Kyte’s expansion into markets, starting with Washington, D.C. Kyte also has operations in Boston, Los Angeles and San Francisco. 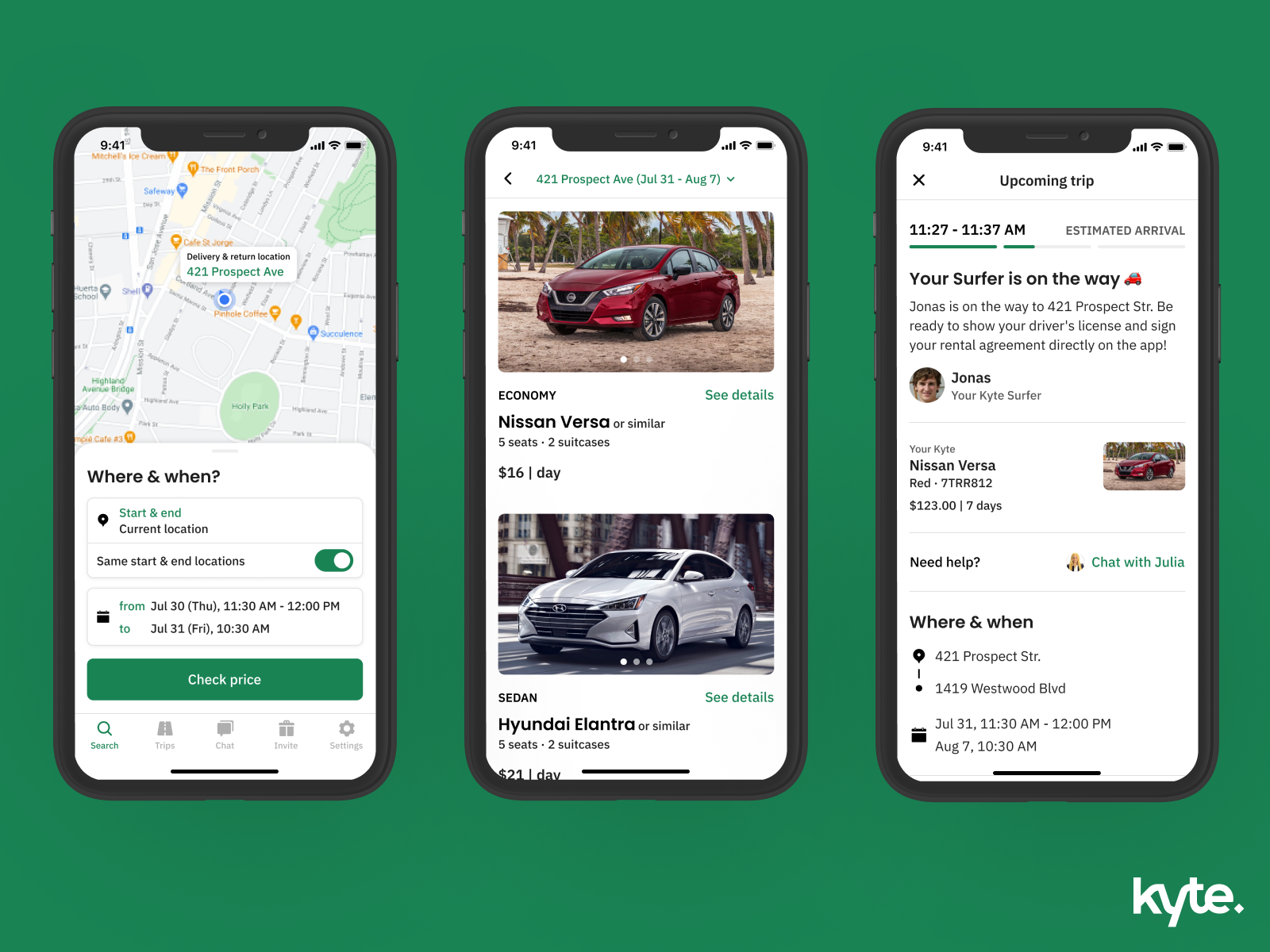 Kyte’s founders wouldn’t disclose their revenue, except to say it’s generating a “solid six-figure” amount of revenue monthly. Schoenack added that Kyte’s monthly revenue has grown 400% since March as more consumers have turned to cars during the COVID-19 pandemic.

“Even before COVID was on the horizon, it was clear that we needed to change the way we interact with cars,” Schoenack said. Consumers have been more willing to try alternatives like Kyte to travel as COVID-19 has turned many off from air travel.

Despite this fast growth, Schoenack said more than half of Kyte’s bookings come from recurring users.

Kyte has also found its clients — which Schoenack would only describe as the biggest rental car companies in the country — are willing and enthusiastic participants since it helps get vehicles in the hands of customers. Rental car companies were hit hard by COVID-19 since the bulk of operations are at airports. These companies were left with millions of dollars of depreciating assets that weren’t generating any revenue.

DN Capital’s co-founder and managing director Steve Schlenker believes that Kyte will be a core building block to the future of mobility.

“The pandemic has accelerated the transformation of cities and consumer behavior with respect to transportation,” Schlenker said. “Kyte’s unique operations layer facilitates this transformation while providing a level of service and convenience that other solutions fail to meet.”