TMYTEK recently raised a Series A+ round of about $10 million for products that make it easier to test 5G millimeter wave equipment. So far, the company’s clients include KDDI, SoftBank, Fujitsu and research institutions. But the Taiwanese startup has aspirations to sell its own base stations, too, competing with well-established players like Nokia, Ericsson, Samsung and Huawei. TMYTEK plans to use its expertise, gleaned from helping other researchers develop 5G infrastructure, to create what its chief executive officer describes as a “complete 5G industrial chain.”

Founder and president Su-Wei Chang told TechCrunch that it plans to raise a Series B next to develop and commercialize its base stations. To get ready for its base station business, TMYTEK recently joined the O-RAN Alliance, founded by some of the world’s biggest telecoms to create more interoperable mobile networks, in a bid to encourage the development of new technology and faster deployment.

Chang said TMYTEK’s base in Taiwan gives it a strategic advantage. 5G manufacturing is an important part of Taiwan’s economy, with exports reaching record highs during the second half of 2020, thanks in part to demand for 5G-related equipment and technology for smartphones, autonomous vehicles and smart devices. 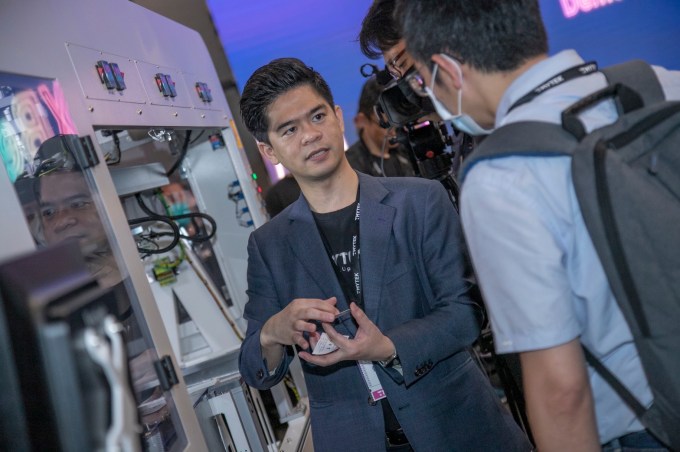 Chang studied at University of Massachusetts Amherst and when TMYTEK was founded six years ago, he was often asked why he didn’t stay in the United States, where it would have been easier to secure startup funding. But being in Taiwan puts the company closer to many important markets, including Japan, where 30% of its current business comes from, and gives TMYTEK a good foundation to expand into the U.S. and European market, he said.

It has also given the company a supply chain advantage. TMYTEK has manufacturing partners across Asia, including Inventec in Taiwan, and factories in Vietnam and Thailand, in addition to China. Chang said this means TMYTEK was not limited by the COVID-19 pandemic or the U.S.-China trade war.

Before launching TMYTEK in 2014, Chang and co-founder Ethan Lin both worked at Academia Sinica, one of the top research institutions in Taiwan, where they focused on millimeter waves even though at the time most researchers were more interested in the mid-band spectrum.

Millimeter waves offer powerful signals with wide bandwidth and low latency, but drawbacks include difficulty traveling through obstacles like buildings. It also has a limited range, which is why millimeter waves need more base stations. Beamforming, which directs signals toward a specific device, and antenna array, or multiple antennas that work like a single antenna, are used to extend its coverage.

One of the main challenges for the millimeter wave market, however, is the lack of R&D tools to speed up their development and time to market, resulting in higher costs and slower deployment.

To keep up with market opportunities, TMYTEK transitioned from design and manufacturing projects for clients to offering 5G-focused solutions like the BBox, which stands for “beamforming box.” The BBox was created after a professor at National Taiwan University told Chang that his team was working on antenna design, but didn’t have the resources to work on beamforming technology, too. It lets researchers create 16 beams and control the signal’s amplitude and phase with software, so they can test how it works with antennas and other hardware more quickly. TMYTEK claims the BBox can save researchers and engineers up to 80% in time and cost.

Chang said TMYTEK realized that if researchers at NTU, one of Taiwan’s largest research universities, needed a solution, then other labs did, too. So far, it has delivered 30 sets to companies including KDDI, SoftBank, Fujitsu, several Fortune 500 companies and research institutions.

While the BBox was created for antenna designers, the company also began exploring solutions to help other designers, including algorithm developers who want to test beam tracking, communicate with base stations and collect data.

For that scenario, TMYTEK created the XBeam, which it describes as a “total solution,” and is meant for the mass production phase, testing modules, smartphones and base stations before they are shipped. Traditional solutions to test modules rely on mechanical rotators, but Chang said this is more suited to the research and development process. The XBeam, which is based on the BBox, electronically scans beams instead. The company claims the XBeam is up to 20 times faster than other testing solutions.

TMYTEK created the XBeam’s prototype in 2019 and launched the commercialized version in November 2020.

The BBox and XBeam will help TMYTEK build its own base station business in two ways, Chang said. First, having its own solutions will allow TMYTEK to test base stations and bring them to market faster. Second, the startup hopes building a reputation on effective research and development tools will help it market its base stations to private and public networks. This is especially important to TMYTEK’s ambitions since their base stations will be up against products from major players like Nokia, Ericsson, Samsung and Huawei.

“Our advantage at TMYTEK is that we’re doing the design and we have good partners for manufacturing. Inventec, our investor, is a top five manufacturer in Taiwan,” he said. “And TMYTEK also builds our own testing solution, so our value is that we can provide a total solution to our customers.”