Ahead of the turning of the New Year, many people are wishing they could do something about the environment. Now, a U.K. startup hopes to make our environmental impact more personal.

Yayzy has now launched an iOS app (Android is coming) which literally links to your bank account to work out the environmental impact of what you buy. It uses payment data via Open Banking standards to automatically calculate the carbon footprint of each purchase a user makes, giving them a picture of their total monthly carbon emissions. This makes the carbon footprint calculated more accurate and bespoke to the individual, allowing them to immediately connect their spending to its impact on the planet.

Yayzy has secured £900,000 in backing from Antler Venture Capital, Seedrs (a crowdfunding round) and the CoreAngels Impact Fund. As the user sees what the carbon footprint is of their purchase, they can choose to offset it right then and there on the app via the carbon offsetter Ecosphere Plus. In the app, users can also find tips to reduce their carbon footprint, eco-friendly retailers near them or insights into lifestyle choices that have the highest environmental impact.

Their competitors are people like CoGo, a real-time Carbon Footprint tracker, and Doconomy and the soon to launch Tred.

But Yayzy is taking a different approach. It brings together all of a user’s spending and shows them item by item as they spend what the carbon footprint of that spend is. So far — it claims — its competitors don’t do that. 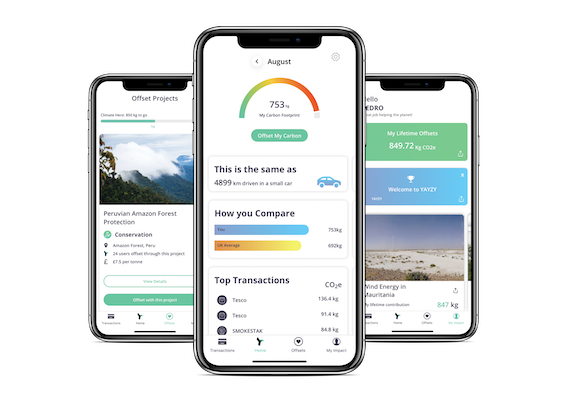 This can be done ad hoc, item by item, or by signing up to a monthly subscription to either carbon offsetting projects or the user’s own unique climate portfolio. This portfolio would bundle multiple projects for a more “holistic” impact. Yayzy says all of these projects have been carefully selected based on strict criteria, and also advance the UN Sustainable development goals.

For its underlying carbon data, Yayzy is using Vital Metrics, as used by Google, Microsoft and both the U.K. and U.S. governments, among others.

Mankaran Ahluwalia, co-founder and CEO of Yayzy, said in a statement: “While emissions have gradually risen as lockdown eases, YAYZY wants to put us all in the driver’s seat to control our own environmental impact… It is clear from a plethora of surveys that the majority of people want to address climate change before it is too late, but that a huge intention/action gap blocks much of it. Our solution with Yayzy is to make environmental impact ‘up close and personal’ and the action to tackle it super easy, all via your phone.”

Ahluwalia, was a technology analyst with Infosys and built a lending platform for alternate credit. Co-founder Cristian Dan, CTO, previously built a discounts platform and co-founder Pedro Cabrero, CFO was in equity sales and trading for UBS and Citigroup, and co-founded a leading online pharmacy in Mexico.