A startup with a new type of spacecraft propulsion system could make the interplanetary travel seen in “Star Trek” a reality. Magdrive has just closed a £1.4 million seed round led by Founders Fund, an early investor in SpaceX, backed by Luminous Ventures, 7percent Ventures and Entrepreneur First.

Magdrive is developing a next generation of spacecraft propulsion for small satellites. The startup says its engine’s thrust and efficiency are a “generational leap” ahead of any other electrical thrusters, opening up the space industry to completely new types of missions that were not possible before, without resorting to much larger, expensive and heavier chemical thrusters. It says its engine would make fast and affordable interplanetary space travel possible, as well as operations in very low Earth orbit. The engine would also make orbital manufacturing far more possible than previously.

Existing electrical solutions are very efficient but have very low thrust. Chemical thrusters have high thrust but lack efficiency and are hazardous and expensive to handle. Magdrive says its engine can deliver both high thrust and high efficiency in one system. 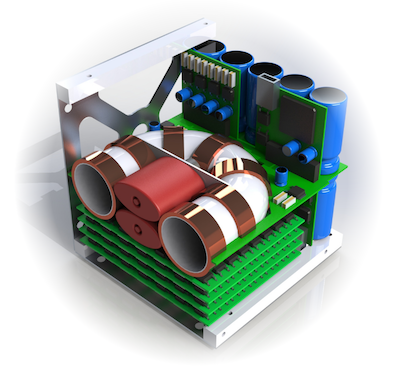 If it works, the Magdrive engine could make spacecraft go faster for longer. This could open up the industry to new space missions, such as a satellite (or X-wing fighter?) that can make multiple, fast maneuvers without worrying about conserving fuel. In order to do this right now, satellites require a chemical thruster, which requires a significant payload in fuel for launch. A 200kg satellite would require 50kg of hydrazine fuel, which would cost £1,350,000 in launch mass alone.

Co-founder (and Star Trek fan) Dr Thomas Clayson did a PhD in plasma physics, working on advanced electromagnetic fields. He realized this could be a cornerstone for developing a plasma thruster that could achieve the accelerations required for interplanetary space travel. After meeting Mark Stokes, a mechanical engineer at Imperial College London with similar dreams of space travel, they decided to build a small scale thruster for satellites.

But Magdrive is not alone. Other companies are developing so-called “Hall Effect Thrusters”, which is a technology that has existed since the 1960s. Much of the development is toward miniaturization and mass reduction, but thrust and efficiency remain the same. These companies include Busek, Exotrail, Apollo Fusion, Enpulsion and NanoAvionics. Meanwhile, large international companies with huge technology portfolios are working on improving chemical propulsion and making it non-toxic to handle, such as Aerojet Rocketdyne and Moog ISP.

They plan to scale up their technology to power larger manned spacecraft (once in orbit) to long-distance destinations such as the moon and Mars. Their system would present a much more affordable way than a chemical or nuclear solution, due to the huge reduction in fuel costs, and because it is reusable.

Andrew J Scott, founding partner, 7percent Ventures: “At 7percent we seek founding teams with ‘moonshot’ ambitions. With Magdrive this is not just a metaphor: their revolutionary plasma thruster will soon be powering satellites, but in the future could take us to deep space. While the UK’s expertise in constructing satellites is world-renowned, there has been far less focus on propulsion. In fact, Great Britain is the only country to have successfully developed and then, in the 1970’s abandoned, an indigenous satellite launch capability, which undoubtedly curbed the UK’s space sector. So we’re excited to be backing Magdrive, one of a new generation of British space startups, which has the vision and ambition to become a world-beating company in this burgeoning sector.”

The satellite industry is worth $5 billion in 2020, and is predicted to grow to $30 billion by 2030, due to the rise in mega-constellations. Some 5,000 satellites are due to be launched in the next two years and 75% of all the companies launching these satellites have already flown something in space.

Magdrive is at the European Space Agency Business Incubation Centre in Harwell, Oxford.