Gorgias announced today that it has raised $25 million in Series B funding, bringing the startup’s pre-money valuation to $300 million.

When the company raised its Series A just over a year ago, CEO Romain Lapeyre (who founded Gorgias with CTO Alex Plugaru) told me that it works with e-commerce businesses to automate responses to their most common customer service questions, while also providing tools that help the support team respond more quickly and even convince customers to buy additional products and services.

That may not be surprising, given the overall growth in e-commerce during the pandemic. As Lapeyre put it, merchants saw “a huge boost” in online orders, which resulted in a similar rise in customer service requests — so they’re increasingly turning to Gorgias for help.

Initially, Lapeyre said merchants are just eager to respond to their customers more quickly and to make their support team more efficient. But over time, they become more interested in using customer support “as way to drive sales.” In fact, he recalled talking to one business that used to compensate its support team based on response time and now offers them a sales commission. 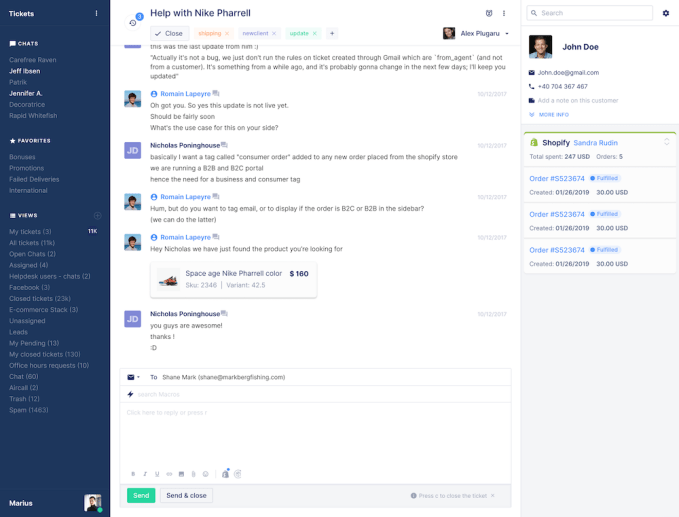 He said he expects these trends to continue after the pandemic ends: “We just jumped five years into the future.”

Gorgias has now raised a total of $40 million. The new round was led by Sapphire Ventures, with participation from SaaStr, Alven, Amplify Partners, CRV and Greycroft.

Lapeyere said the money will allow Gorgias to continue hiring (it went from a team of 30 people to more 100 people this year), particularly on the engineering side, where it can develop even more automation for the platform.

“As consumers increasingly shop online, the Gorgias platform powers a new breed of customer support for high-growth e-commerce brands,” said Sapphire Ventures Managing Director Rajeev Dham in a statement. “Co-founder and CEO Romain Lapeyre and team have built an incredible product that provides e-commerce merchants with a single app to manage all of their customer communications — ultimately delivering a far better customer experience.”