Inspiration to launch a lawn-care company struck Coulter Lewis when he was shopping for lawn-care products one day. The entrepreneur, who previously worked as a designer and co-founder of a snack company, says the stench of pesticides and herbicides piled high was too strong to ignore.

Lewis began researching safer alternatives to fertilize his backyard. His research showed him that he wasn’t alone: a typical managed lawn in the United States gets five times more pesticides per acre than the average industrial farm. A lack of options on the market inspired him to create his own.

Founded in 2019, Sunday is a direct-to-consumer company that wants to sell customized, eco-friendly lawn care to the approximately 90 million Americans who have lawns. To date, it has fertilized more than 10,000 acres of lawn.

“We’re selling agtech for your backyard,” Lewis said. It’s a catchy way to describe the more complicated process of creating custom lawn plans. The company brought on chief science officer Frank Rossi, who has a PhD at Cornell, to create its core product, which requires a mix of tech and science to work.

Sunday starts by taking a customer’s home address and, based on the location, can begin gleaning what types of soil it will be working with. By using machine learning, satellite imagery and property data, Sunday creates a custom plan with nutrients to address problem areas, such as grass health in different bio-environmental situations. The end-product includes ingredients that are hard to find in on-shelf solutions, like seaweed extract and soy protein.

Kits include instructions, a pouch of pre-measured nutrients to attach to a hose and spray, and soil test. While each kit is customized, lawn-care products are highly regulated and need state approval. Sunday has 24 iterations of its core product now out that meet this approval. 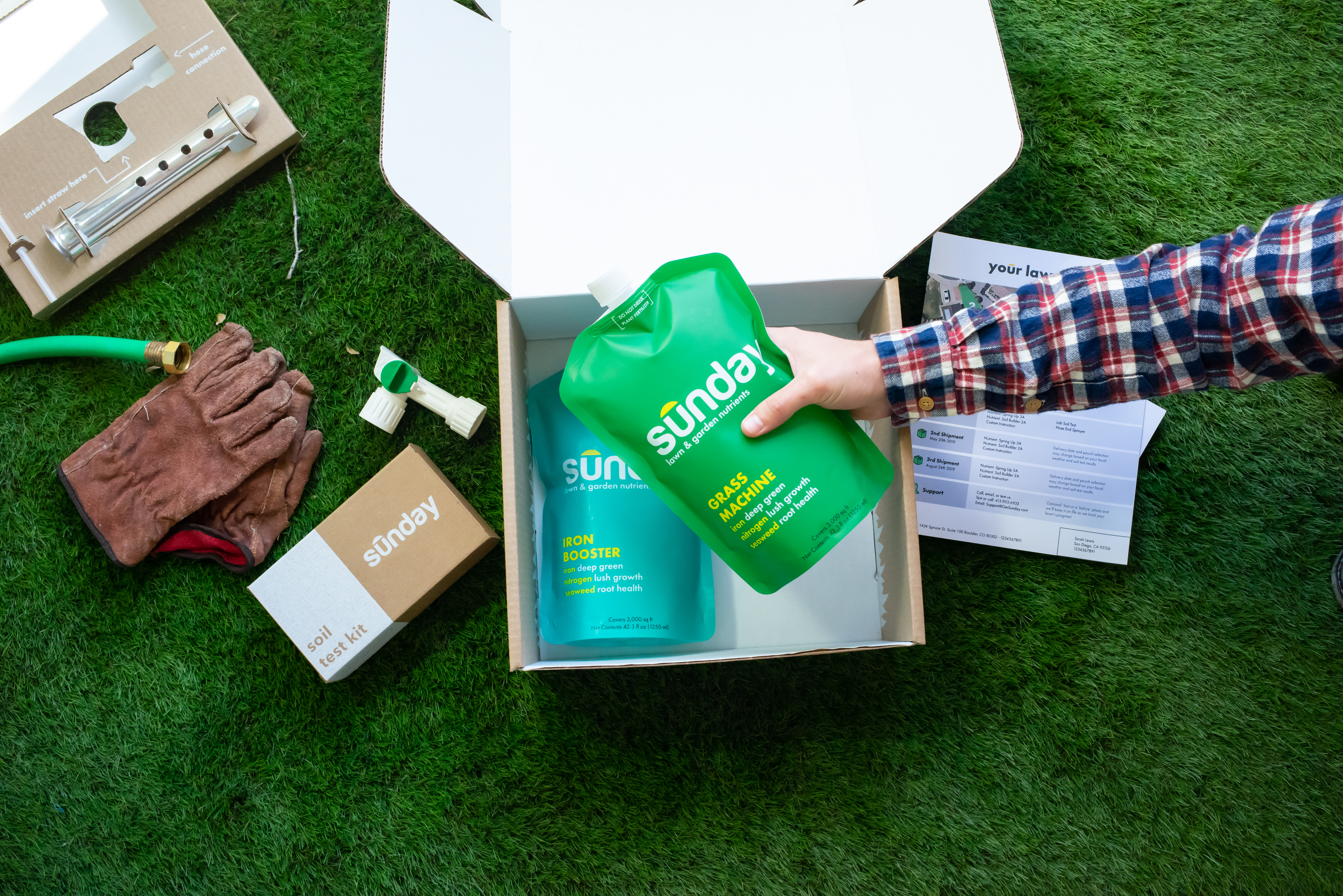 Once the solution is created, customers have to pay for a full season or full year to get installments shipped to their homes. As customers use Sunday’s lawn-care products, the startup also uses aerial imagery to check on the status of users’ lawns throughout the experience.

Sunday sells at a variety of price points, and is dependent on lawn size, but Lewis does claim it’s “much cheaper” than hiring a professional to come and fertilize your lawn. “When you look at a lot of more modern, [consumer] businesses, there’s kind of more of a coastal millennial focus,” he said. “Whereas we’re thinking more about 90 million Americans, where the…median American income is $65,000 per household.”

Interestingly, Sunday says that its customers skew younger, between 30 and 40 years old, and concentrate in Middle America states (where lawns are more of a reality). The age range makes sense because it encapsulates new families moving to the suburbs and first-time homeowners. Most of its customers have smaller suburban lawns.

When asked why they aren’t selling to golf courses or going the B2B route, Lewis said that “it’s certainly something that we think about a lot.” The company is currently working to partner with parks to help remove toxic pesticides from public spaces, but talks are in the early stages.

The lack of innovation around lawn care might also signal a lack of demand from consumers. One of Sunday’s biggest hurdles when launching in 2019 was if it could convince consumers to care about one of the biggest crops in the backyard — their backyards.

The coronavirus has also accelerated the migration of new families from cities to suburbs, Lewis says. According to the Census, home ownership has hit a 12-year high. This year, Sunday is set to do 8X in revenue as it did in 2019, where it was making “millions in revenue.” Lewis declined to share profitability metrics or answer if Sunday was profitable.

Despite this, venture capitalists seem bullish on a startup serving up an alternative to lawn care.

Today, Sunday announced that it has raised $19 million in Series B financing led by Sequoia Capital, with participation from Tusk Ventures and Forerunner Ventures. The raise brings Stephanie Zhan, partner at Sequoia Capital, to the board.

In an email to TechCrunch, Zhan likened Sunday to other Sequoia portfolio companies such as Glossier, DoorDash, Instacart and Noom, saying that she thinks that “Sunday has a similar opportunity to build a compounding consumer subscription business and a defining brand for outdoor homecare.”

The new money will allow Sunday to grow its 40-person staff with 30 new hires. Currently, there is only one female executive on Sunday’s team, although Lewis says they are committed to hiring a more diverse team.

It takes capital to serve the average American household, and with the new financing, Sunday has a total of $28 million in known venture financing to help, at the very least, with your backyard.