Despite several efforts from carriers, telecom regulators, mobile operating system developers, smartphone makers and a global pandemic, spam calls continued to pester and scam people around the globe this year — and they only got worse.

Users worldwide received 31.3 billion spam calls between January and October this year, up from 26 billion during the same period last year, and 17.7 billion the year prior, according to Stockholm-headquartered firm Truecaller.

The firm, best known for its caller ID app, estimated that an average American received 28.4 spam calls a month this year, up from 18.2 last year. As a result, and with 49.9 spam calls per user a month, up from an already alarming 45.6 figure last year, Brazil remained the worst impacted nation by spam calls, the firm said in its yearly report on the subject.

The coronavirus pandemic, however, lowered the volume of spam calls users had to field in several markets, including India, which topped Truecaller’s chart for the worst nation affected three years ago. The nation, the biggest market of Truecaller, dropped to the ninth position on the chart this year with 16.8 monthly spam calls per user, down from 25.6 last year. 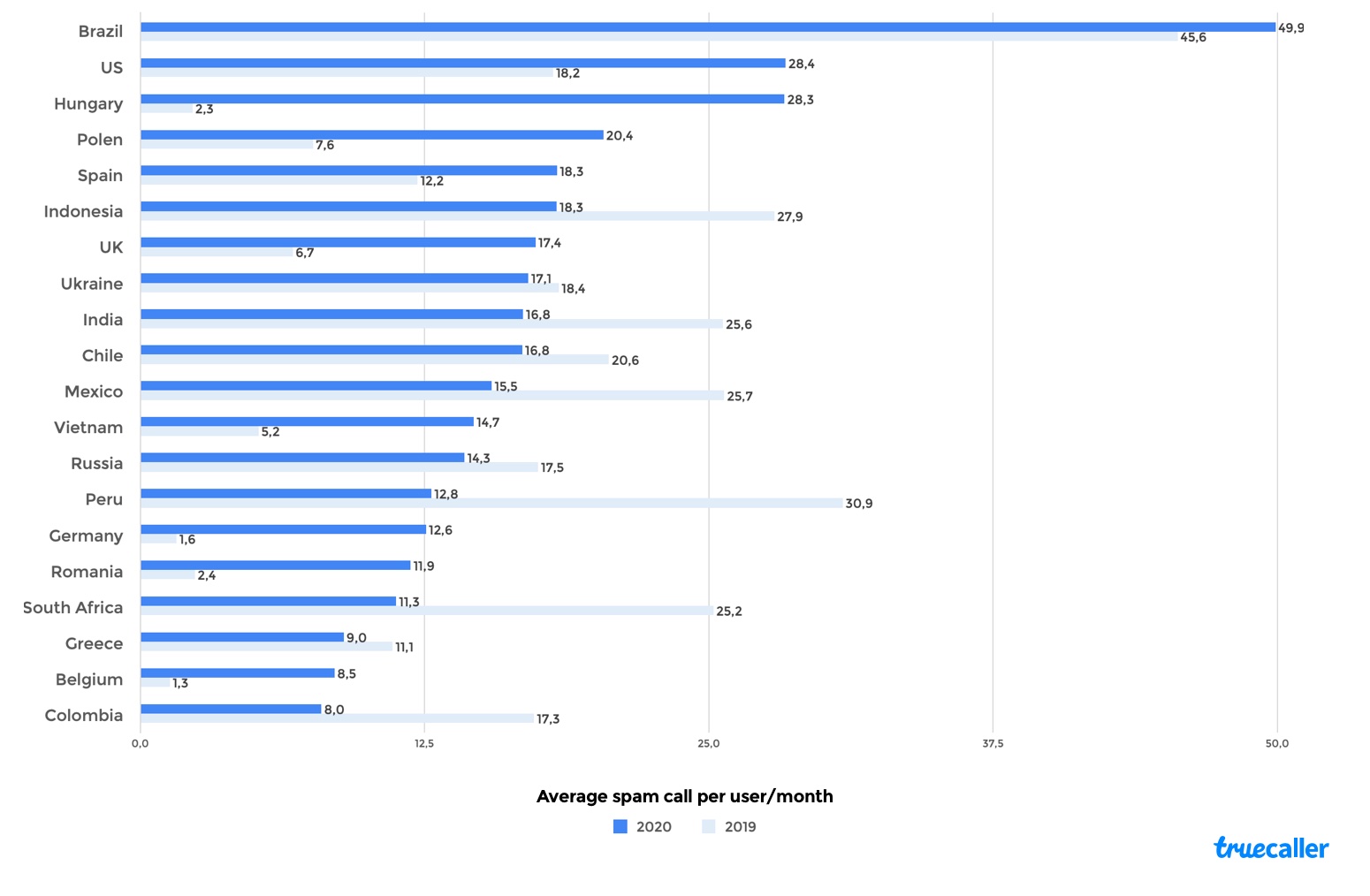 “The COVID-19 pandemic has directly and indirectly affected not only global economies and societies, but spammer behaviour. As the virus spread exponentially worldwide, spam calls started to decrease around March,” said Truecaller, which analyzed over 145 billion anonymous calls to reach this conclusion.

“Spam reached its lowest point in April, when strict curfews and lock downs were implemented worldwide. The overall volume of calls also dipped during this period. However, from this point, reports of scammers taking advantage of the uncertainty around the pandemic emerged. In May, spam calls started to pick up again and have been increasing on average by 9.7% per month. October, with a record high in terms of spam calls, was 22.4% higher than the pre-lockdown period.”

Some other trends from the report:

In addition to bringing annoyance, these calls are also being used to scam people out of money. As many as 56 million Americans reported having lost money to phone scams this year, and an estimated $19.7 billion was lost to such calls, according to an earlier Truecaller report.

It’s also difficult to avoid these calls in some markets because trusted institutions — telecom operators and banks, to name two — themselves engage in placing many of these calls, the report found. About 9% of all spam calls that people received in the U.S. were dialled by telecom networks, for instance, the report said.

How to stop robocalls spamming your phone