Compensation within private venture-backed startups can be a confusing minefield that if unsuccessfully navigated can lead to inconsistent salaries and the kind of ambiguity that breeds an unhappy workforce.

Pave, a San Francisco-based startup that recently graduated from YC Combinator is aiming to end the pay and equity gap with a software tool it developed to make it easier to track, measure, and communicate how and what they pay their employees.

The question is whether Silicon Valley, which has a history of pay inequity and gender disparities, is ready for that kind of transparency?

Investors certainly think so. Andreessen Horowitz has poured millions into Pave’s $16 million Series A round, at a post-money valuation of $75 million, confirming our reports from August. The round also includes the a16z Cultural Leadership Fund, Bessemer Venture Partners, Bezos Expeditions (a personal investment company of Jeff Bezos), Dash Fund, and Y Combinator.

Kristina Shen, a GP at A16z, will be joining the board. Marc Andreessen will take a board observer seat.

A rebrand and re-focus

Pave, known until now as Trove, is trying to build an online market of data and real-time tools that bring more fairness in compensation to the startup world. The tools allow a company to track, measure and ultimately communicate compensation on an employee-by-employee basis. It does so by integrating HR tools such as Workday, Carta and Greenhouse into one unified service that CEO Matt Schulman says it only takes the customer 5 minutes to set up with Pave.

The service can then help companies figure out how to manage their employees’ pay, from promotion cycles and compensation adjustments to how to reward a bonus and how much equity to grant a new employee.

Employees, meanwhile, can see data on their entire compensation package as well as predictive analytics on how they can grow their stake in the company. The tool is called Total Rewards, and its closest competitor, Welcome (which raised $6 million this week) launched a tool with the same name, and same goal. 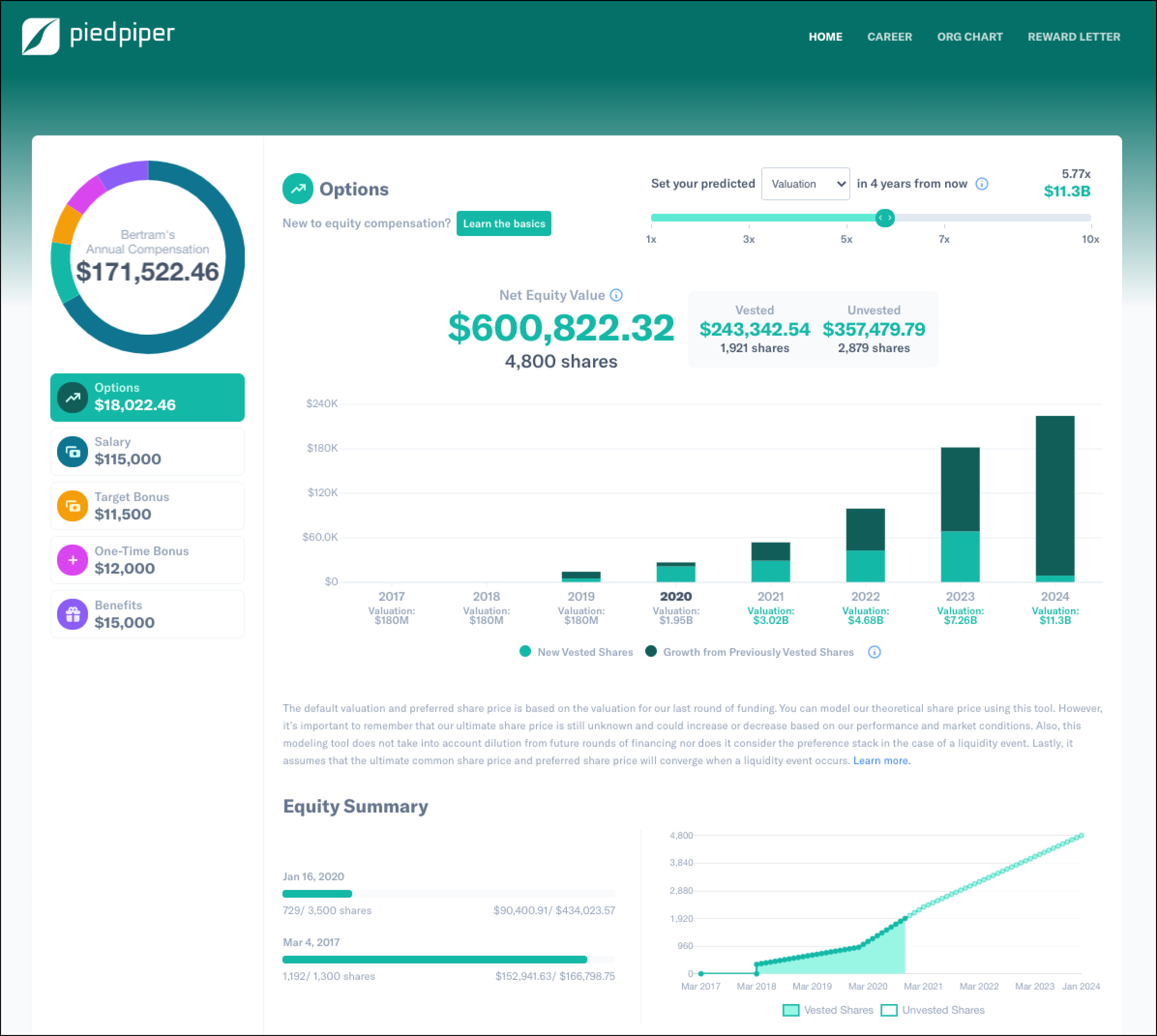 Schulman says that all startups struggle with figuring out stock options, equity, benchmarking data and promotion cycles because it’s an offline (and cumbersome) process. Clear communication about these details, though, helps with both hiring and retention.

Pave’s biggest challenge, is convincing its startup customers to share data on their payment structures. While data is anonymized so employees can’t see their colleagues salaries, it does require buy-in from a company to track potential inequity in the first place.

“I imagine there will be some late adopters that are not fully aligned with that vision at first,” Schulman admits. “How can we really change how compensation works as something that has been stagnant for decades upon decades? That’s not an easy challenge.” Right now, Pave is working with companies on a case by case basis to see how much they want to communicate with employees. Long-term, Schulman wants there to be a standard.

Is the industry ready to be benchmarked?

And the founder is optimistic that he can get there. Schulman pointed to Carta, a cap management tool, as an example of widespread adoption.

“There were companies that at first resisted Carta, and they were not comfortable putting all of their records into one centralized database,” he said. “Now, it’s ubiquitous. Every company uses Carta among venture-backed companies.”

But,even Carta has struggled with what it wants other companies to do: pay their employees fairly. Carta is currently facing a lawsuit from its former vice president of marketing, Emily Kramer, for gender discrimination. In the lawsuit, Kramer notes that she was paid $50,000 less relative to her peers, and her equity grant was one-third the amount of shares than her male counterparts. The company also laid off 16% of its employees, citing a lack of new customers.

If Carta, valued at $3 billion, has difficulties, then an early-stage startup such as Pave will also come up against big hurdles around transparency. The startup is hoping that its new industry-wide benchmark project will help kickstart the conversation and nudge companies in the right direction.

Launching today, Pave has teamed up with the portfolio companies of a16z, Bessemer Venture Partners, NEA, Redpoint Ventures and YC to gather compensation data. The data, which is opt-in, will allow Pave to release a compensation benchmark survey to show how companies pay their employees. The survey will be public but will aggregate all company responses, so there is no way to see which company is doing better than others.

Other platforms have tried to do measure pay across roles, such as Glassdoor and Angellist. Schulman says that “companies don’t trust that data” because it’s crowdsourced and therefore has a survey bias.

The tool would help companies go from doing a D&I analysis once a year to being able to do it consistently, “so they don’t drift away from a fair and equitable state,” he said.

While Pave tries to convince other startups to share intimate information, as a company it is still figuring out how to do the same. The company declined to share the diversity break-down of its team, which grew from five to 13 employees in just months and has a 30-person target by end of year. Based on LinkedIn, Pave’s team skews white and male.

A push from the rise of remote work might make transparency happen sooner than later. The rise of distributed workforces has forced companies to start asking questions around compensation, Schulman said.

“How do you pay your San Francisco engineer who wants to move to Wyoming?” Schulman said. “That’s the question that’s on everyone’s mind.” The shift is making compensation become a mainstream conversation, the company has found interest in its service from companies including Allbirds, Checkr, Tide, and Instabase. Schulman says early adopters have been bullish about transparency.

Once Pave can figure out how to support venture-backed startups, it’s looking outwards to other geographies and types of businesses.

“There’s 3 billion humans in the world that work in a part of the labor market,” he said. “And right now it’s a black box in how they’re compensated.”