The UK government has approved the BioNTech/Pfizer vaccine against COVID-19 for emergency use, following the recommendation of the national medicines regulator.

The UK is the first country to approve the vaccine for widespread use — paving the way for some of the most “high risk” citizens, such as elderly care home residents and front-line healthcare workers, to get the jab before the end of the year.

The BBC reports that the UK’s Medicines and Healthcare Products Regulatory Agency (MHRA) has said the vaccine is safe to be rolled out from next week. Though it’s not yet clear exactly who will get the first doses.

BREAKING NEWS: The Government has accepted @MHRAgovuk recommendation for authorisation of @Pfizer and @BioNTech_Group's #COVID19 vaccine for use in the UK.

The request for emergency authorization was submitted by BioNTech and Pfizer to the MHRA last month — as well as to regulators in Australia, Canada, Europe, Japan and the U.S., none of which has yet given the go ahead.

In a statement, Albert Bourla, chairman and CEO of Pfizer, described the Emergency Use Authorization in the U.K. as “a historic moment in the fight against COVID-19”.

“This authorization is a goal we have been working toward since we first declared that science will win, and we applaud the MHRA for their ability to conduct a careful assessment and take timely action to help protect the people of the U.K.,” he said. “As we anticipate further authorizations and approvals, we are focused on moving with the same level of urgency to safely supply a high-quality vaccine around the world. With thousands of people becoming infected, every day matters in the collective race to end this devastating pandemic.”

The UK approval is based on trial data, including a worldwide Phase 3 clinical study carried out by BioNTech/Pfizer  which demonstrated an efficacy rate for the vaccine of 95% and raised no serious safety concerns.

The vaccine was also shown to be effective both in participants who had not previously contracted the SARS-CoV-2 virus and those who had — based on measuring efficacy seven days after the second dose.

Efficacy was also reported as consistent across age, gender, race and ethnicity demographics, with an observed efficacy in adults age 65 and over of more than 94%, the companies said.

UK prime minister Boris Johnson tweeted the news of the formal authorization this morning — writing that the vaccine will “begin to be made available across the UK from next week”. (A second tweet anticipated how vaccination in general will “ultimately” enable a return to economic life as usual.)

It’s fantastic that @MHRAgovuk has formally authorised the @Pfizer/@BioNTech_Group vaccine for Covid-19. The vaccine will begin to be made available across the UK from next week. (1/2)

The UK has ordered 40M doses of the BioNTech/Pfizer vaccine, or enough vaccine for 20M people (as it requires two doses), though it will take time for the country to receive all the doses ordered.

“The delivery of the 40 million doses will occur throughout 2020 and 2021, in stages, to ensure an equitable allocation of vaccines across the geographies with executed contracts,” the companies wrote in a press release.

“Now that the vaccine is authorized in the U.K., the companies will take immediate action to begin the delivery of vaccine doses. The first doses are expected to arrive in the U.K. in the coming days, with complete delivery fulfilment expected in 2021,” they added.

The UK’s National Health Service is gearing up for what NHS chief executive, Sir Simon Stevens, described as “the largest-scale vaccination campaign in our country’s history”. Per the BBC, some 50 hospitals are on standby and vaccination centers in venues such as conference centres are also being set up.

In comments to journalists this morning, health secretary Matt Hancock said 800,000 doses of the virus will be available next week, with the bulk of the rollout coming in the new year. “We’ll deploy it at the speed that it’s manufactured,” he added.

Hancock said priority for the first batch of jabs will be given to “the most elderly” and people in care homes, including their carers. “Then essentially it comes down the age range. NHS staff are also high on that priority list, and also the clinically extremely vulnerable… those that are particularly vulnerable to coronavirus,” he added.

Help is on its way.

The MHRA has formally authorised the Pfizer/BioNTech vaccine for Covid-19.

The NHS stands ready to start vaccinating early next week.

The UK is the first country in the world to have a clinically approved vaccine for supply.

The vaccine requires two doses taken 21 days apart. Speaking at a press conference today, officials from the MHRA and the UK’s Joint Committee on Vaccination and Immunisation confirmed full immunity comes seven days after the second dose, although they noted partial immunity can arise a number of days after taking the first dose.

In the press conference the MHRA’s CEO, Dr June Raine, said the public can have “absolute confidence” in the standards of checks carried out on the data which led to the vaccine’s approval — describing them as “equivalent” to those ongoing at international counterparts such as the US’ Food and Drug Administration, which has not yet given the go ahead for use.

The UK’s speed was down to months of preparation, starting in the summer — such as mounting teams and building capacity so staff could work in parallel, she said.

Asked whether brexit had anything to do with the regulator authorizing the vaccine quicker than EU counterparts — something Hancock has claimed — Raine rather said it had benefitted from being able to use provisions under European law that exist until January 1 (when the brexit transition period ends).

The MHRA’s speedy approval was dependent on access to rolling data and expertise, she said — raising questions about whether the UK’s impending exit from the EU will slow down approval of additional COVID-19 vaccines.

“Our progress has been totally dependent on the availability of data in our rolling review and the rigorous assessment and independent advice we have received so I hope that clarifies the point about the European relationship,” Raine added.

JVCI officials said operational constraints associated with the BioNTech/Pfizer vaccine’s requirement for very cold storage (-70 degrees) could lead to some “flexibility” in implementing the first phase of the vaccination program — which otherwise intends it to be offered to priority groups in the following order: 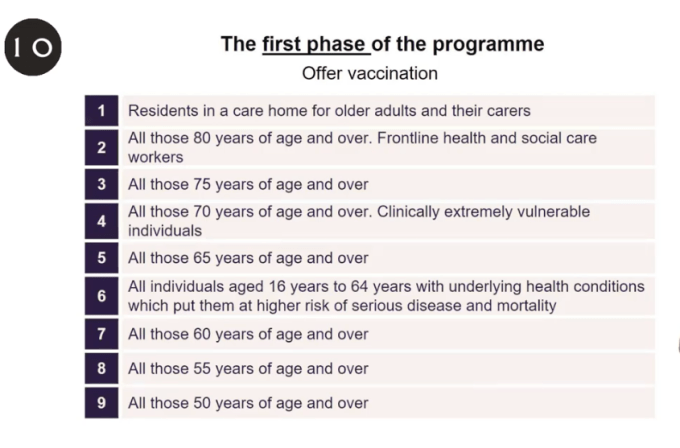 So it could mean, for example, that front line healthcare staff get bumped up if it’s easier to supply the vaccine to them as a result of cold storage facilities where they work. However the officials also noted that the vaccine is stable for a short period between 2-8 degrees — which they suggested will help with the challenge of distribution in care homes.

The UK is obtaining its supply of the BioNTech/Pfizer vaccine from within the EU — from a manufacturing facility in Belgium. It’s not clear whether the impending end of the Brexit transition period will pose any logistical challenges to a smooth future supply of the vaccine — by putting a brake on Hancock’s plan to roll it out at the pace it’s manufactured. This is because negotiations are ongoing between the UK and the EU over a possible post-brexit trade deal, with concerns of major border delays resulting from customs checks in the event of no deal.

Another remaining (non-UK specific) question is how long the vaccine’s protection lasts. Given how quickly the BioNTech/Pfizer vaccine has been developed — in a matter of months — there’s no long term data available to answer that yet.

The same is true of COVID-19 vaccine candidates being developed by other companies.

“The Emergency Use Authorization in the U.K. will mark the first time citizens outside of the trials will have the opportunity to be immunized against COVID-19,” said Ugur Sahin, M.D., CEO and co-founder of BioNTech in a supporting statement. “We believe that the roll-out of the vaccination program in the U.K. will reduce the number of people in the high-risk population being hospitalized.

“Our aim is to bring a safe and effective vaccine upon approval to the people who need it. The data submitted to regulatory agencies around the world are the result of a scientifically rigorous and highly ethical research and development program.”