Today at AWS re:Invent, Andy Jassy talked a lot about how companies are making a big push to the cloud, but today’s container-focused announcements gave a big nod to the data center as the company announced ECS Anywhere and EKS Anywhere, both designed to let you run these services on premises, as well as in the cloud.

These two services, ECS for generalized container orchestration and EKS for what’s focused on Kubernetes, will let customers use these popular AWS services on premises. Jassy said that some customers still want the same tools they use in the cloud on prem and this is designed to give it to them.

Speaking of ECS he said,  “I still have a lot of my containers that I need to run on premises as I’m making this transition to the cloud, and [these] people really want it to have the same management and deployment mechanisms that they have in AWS also on premises and customers have asked us to work on this. And so I’m excited to announce two new things to you. The first is the launch, or the announcement of Amazon ECS Anywhere, which lets you run ECS and your own data center,” he told the re:Invent audience. 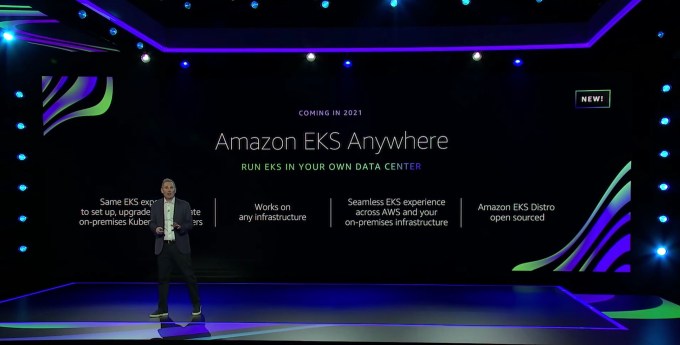 He said it gives you the same AWS APIs and cluster configuration management pieces. This will work the same for EKS, allowing this single management methodology regardless of where you are using the service.

While it was at it, the company also announced it was open sourcing EKS, its own managed Kubernetes service. The idea behind these moves is to give customers as much flexibility as possible, and recognizing what Microsoft, IBM and Google have been saying, that we live in a multi-cloud and hybrid world and people aren’t moving everything to the cloud right away.

In fact, in his opening Jassy stated that right now in 2020, just 4% of worldwide IT spend is on the cloud. That means there’s money to be made selling services on premises, and that’s what these services will do.