Autodesk, the U.S. publicly listed software and services company that targets engineering and design industries, has acquired Norway’s Spacemaker, a startup that has developed AI-supported software for urban development.

The price of the acquisition is $240 million in a mostly all-cash deal. Spacemaker’s VC backers include European firms Atomico and Northzone, which co-led the company’s $25 million Series A round in 2019. Other investors on the cap table include Nordic real estate innovator NREP, Nordic property developer OBOS, U.K. real estate technology fund Round Hill Ventures and Norway’s Construct Venture.

Founded by Håvard Haukeland, Carl Christensen and Anders Kvale, and based in Oslo, Norway — but with a number of other outposts around the globe — the 115-person Spacemaker team develops and sells cloud-based software that utilises AI to help architects, urban designers and real estate developers make more informed design decisions. By having Spacemaker look over a designer’s shoulder, as CEO Haukeland likes to say, the software aims to augment the work of humans and not only speed up the urban development design and planning process but also improve outcomes, including around sustainability and quality of life for the people who will ultimately live in the resulting spaces.

To do this, the platform enables users to quickly “generate, optimize, and iterate on” design alternatives, taking into account design criteria and data like terrain, maps, wind, lighting, traffic and zoning, etc. Spacemaker then returns design alternatives optimized for the full potential of the site.

“It was never our plan in the beginning of 2020 to sell the company,” Haukeland told me on a call last week. “But when we started talking to Autodesk, who have reached out for a while, we realized they share our vision. And we understood that this can put our vision on steroids and we can really reach that vision much faster. And that’s what drives us, that’s what we want to do: We want to realize our vision and get our offering out in the world, at the hands of millions of architects and engineers and developers”.

During a call late Friday, Andrew Anagnost, CEO and president of Autodesk, said the acquisition of Spacemaker is in line with the company’s long-term strategy of using the power of the cloud, “cheap compute” and machine learning to evolve and change the way people design things.

“This is something strategically we’ve been working towards, both with the products we make internally with the capabilities we roll out that are more cutting edge, and also our initiative when we look at companies we’re interested in acquiring,” he said. 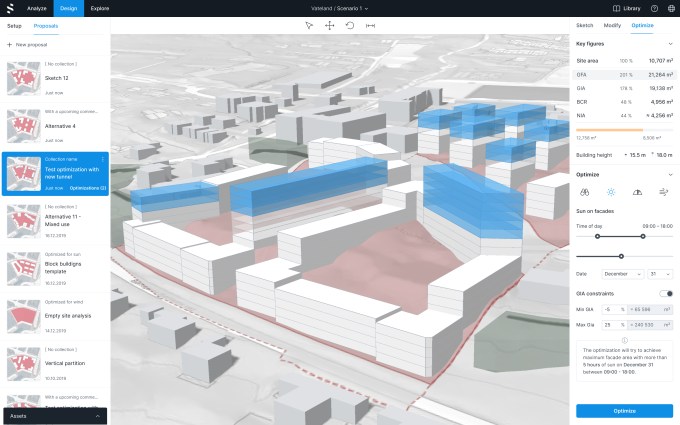 Post-acquisition, the plan is to keep Spacemaker as an autonomous unit within Autodesk and (hopefully) not interfere too much with the formula and startup ethos that has seemingly been working, while also enabling the team to have the resources needed to continue on their mission.

“They want to let Spacemaker be Spacemaker; they’re not [just] acquiring our product, they’re acquiring the potential and the journey we’re on as a team,” says Haukeland. “They’re acquiring the mission we’re on, the way we work, the knowledge we have, [and] all our failed attempts along the way… so it’s much more than just swallowing the product”.

That knowledge and those “failed attempts” span not only the Spacemaker CEO’s own background as an architect, but the path to product-market-fit and the technology itself.

“Initially they targeted architects directly, but realised that they have relatively small budgets,” recalls Michiel Kotting, who led the startup’s Series A round on behalf of Northzone. “From Håvard’s experience in the industry they decided to pivot to serving [property] developers who then give the software to their in-house and external architects. They were surprised to see that they could get significant six-figure deals per project out of the gate”.

He also says the team was convinced early on that generative design is the future. “Rather than be software that can do what architects used to do on paper, the full power of modern day compute is put at the disposal of architects,” he told me. “The path to get there has been a bit like Deep Mind’s AlphaGo project — a myriad of different techniques, ML, AI, rules based optimisation etc. that jointly provide the most powerful result, rather than just ‘lets just throw the latest deep learning model at the project and see what sticks’ “.

“They were actually solving a problem, a problem that our customers were telling us that they wanted solved and liked the way they were solving it,” says Anagnost. “So it wasn’t just a great team with a great idea and some great technology, they actually solved the problem. And I think this is really important: You can play with technology all you like, but if you can’t find the intersection of either creating a whole new opportunity or market or solving an existing problem in a completely new and disruptive way, then you really haven’t created something useful. They’ve created something useful”.

“When we led Spacemaker’s Series A round less than two years ago, we saw a world-leading product and a company with the DNA to push the boundaries of what was possible in applying AI to architecture and property development,” says Atomico’s Ben Blume. “As the global leader in architecture, engineering and construction (AEC) software, and with products that set the standard across the industry, Autodesk’s acquisition validates our belief that world-class AI products are being built here in Europe”. 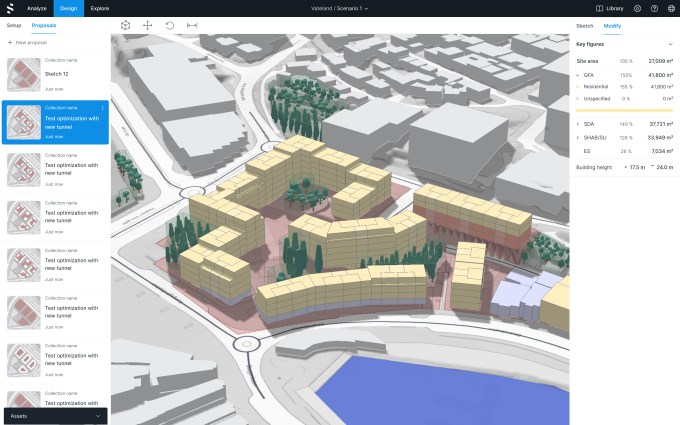 In building out the product iteratively, Northzone’s Kotting says the Spacemaker team “honed the art of ‘human in the loop’ “. “The generative design calculates the possible solution space, and the architect can then navigate that space and figure out interesting starting points and see the impact of design choices. So you can design something that is both beautiful/fit for purpose and optimal”.

He also doesn’t think the team would have been able to do that if it wasn’t for a combination of architectural talent and “bleeding-edge” software designers. This is where founding the company in Norway may have been an advantage. “It might not be so obvious you’d find a lot of those in Norway, but some of the hard-core optimisation problems in oil and gas are very similar to the Spacemaker problem, so it is actually a very fertile country for that,” adds Kotting.

The challenge then wasn’t Norway’s talent pool but persuading the most talented people to work for a startup. This is where Spacemaker’s mission, and Nordic culture more generally, was also a strength.

Reflects Haukeland: “What we experienced in the early days is that when you’re trying to solve such a hard problem, [with] such an ambitious journey, you need incredibly talented people who are able to get a lot of autonomy and solve problems, because there are so many problems you need to solve. And I think what we experienced in Norway four years ago was that a lot of the really good people went into either oil and gas or, you know, consulting. And what we saw was that people really want to join a mission where they can have a positive impact, and they can use their capacity and their talent and their brains to solve difficult problems. We were lucky to get so much incredible talent to join us because of that”.

Anagnost also cites Spacemaker’s culture and its European vantage-point as a differentiator. “This is a European high technology company using cutting-edge algorithms and approaches in the cloud and they start it from an ethical framework that might not be as common as startups in other places,” he tells me. “So if you were to ask me what was differentiating here, I think the ethical framework they’re coming in with this is, ‘we’re going to use this data to enable this audience to do a better job of what they do every day. And we’re going to do it in such a way that we’re partnering with the customers, and we’re also creating better outcomes, not just for them but for the whole ecosystem of stakeholders… and one of the stakeholders is the environment of the area. That ethos from a technology company, probably, you know, rose up faster in the European market than it might have in some of the U.S. markets where it’s more about, ‘let’s plow through things,’ and not so much about what is my ethical foundation here and what I’m trying to accomplish?”

However, with Europe’s current infatuation with unicorns — and a growing track record of producing companies valued at $1 billion dollars (or a lot more) — one legitimate question that can be asked is did the Norwegian startup sell too early?

“I think that’s a very VC-oriented perspective, because what it’s really about is, are they selling out earlier on the return for the VCs?” argues the Autodesk CEO. “I think if you look at it through the lens of what the employees and the company is trying to accomplish, they’re going to be able to accomplish more working closely inside of Autodesk than they would have, even if they continue to accept dollars and have their valuation increase. Maybe the VCs might see a smaller return, [but] I don’t think the employees are going to see a bigger net return to their vision. And if you’ve talked to these people, they’re very passionate about what they do”.

“Even though for our taste this exit comes early in the journey, we share the enthusiasm for achieving maximum impact fast, and have seen in the process how important Autodesk believes the Spacemaker product is in their future,” says Kotting.

Meanwhile, Haukeland maintains that Spacemaker has only built “5% of what can be built” and says the industry as a whole is at the beginning of a huge transformation in the way people work. “When you go from designing something and checking how it works to asking your computer for help and having the computer advising you on your shoulder, it’s really changing the game. That is such a fundamental change that it’s more than just putting a product out there. It’s really a shift that’s going to be changing the industry over the years”.

“We’re going to continue to encourage them and drive them to build out that product,” says Anagnost, “but they’re also going to have other avenues to extend their technology and other places where they can link their technology to parts of the Autodesk ecosystem”.