What a difference a week makes.

This time last week, in the wake of earnings from tech’s five largest American companies and early results from other software companies, it appeared that tech shares were in danger of losing their mojo.

But then, this week’s rally launched, and more earnings results came in. Generally speaking, the Q3 numbers from SaaS and cloud companies have been medium-good, or at least good enough to protect historically stretched valuations when comparing present-day revenue multiples to historical norms.

This is great news for yet-private startups that have had to deal with a recession, an uneven and at-times uncertain funding market, an election cycle and other unknowns this year. Wrapping 2020 with a market rally and strong earnings from public comps should give private software companies a halo heading into the new year, assisting them with both fundraising and valuation defense.

Of course, there’s still a lot more data to come in, markets are fickle and many SaaS companies will report next month, having a fiscal calendar offset by a month from how you and I track the year. But after spending time on the phone this week with JFrog’s CEO, BigCommerce’s CEO and Ping Identity’s CFO, I think things are turning out just fine.

Let’s get into what we’ve learned.

Kicking off, Redpoint’s Jamin Ball, a venture capitalist who unconsciously moonlights as the research desk for the The Exchange during earnings season, has a roundup of earnings results from this week’s set of SaaS and cloud stocks that reported. As you will recall, last week we were slightly unimpressed by its cohort of results. 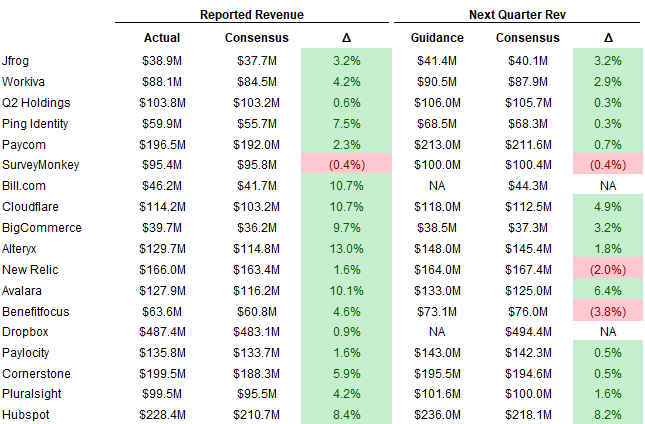 As we can see, there was a single miss amongst the group in Q3. Unsurprisingly, that company, SurveyMonkey, was also one of three SaaS companies to project Q4 revenue under street expectations. My read of that chart is seeing a little less than 80% of the group that did project Q4 guidance that bests expectations is bullish, as were the Q3 results, which included a good number of companies that topped targets by at least 10%.

Inside of the data are two narratives that I want to explore. The first is about COVID-related friction, and the second is about COVID-related acceleration. Every company in the world is experiencing at least some of the former. For example, even companies that are seeing a boom in demand for their products during the pandemic must still deal with a sales market in which they cannot operate as they would like to.

For software companies, reportedly in the midst of a hastening digital transformation, the question becomes whether or not the COVID’s minuses are outweighing its pluses. We’ll explore the matter through the lens of three companies that The Exchange spoke with this week after they reported their Q3 results.

Of our three companies this week, Ping Identity had the hardest go of it; its stock fell sharply after it dropped its Q3 numbers, despite beating earnings expectations for the period.

The company’s revenue fell 3%, while its annual recurring revenue (ARR) rose by 17%. Why did its stock fall if it came in ahead of expectations? You could read its Q4 guidance as slightly soft. In the above chart it’s marked as a slight beat, but its low-end came in under analyst expectations, creating the possibility of a projected miss.

Investors, betting on Ping’s move to SaaS being accretive both now and in the long-term, were not stoked by its Q4 forecast.