A lot of the past decade in smart home gadgets has been figuring out just how smart we actually want our appliances to be. In a lot of cases when it comes to cooking, the old ways are best, and smart features tend to just complicate things. The new Revolution Cooking R180 High-Speed Smart Toaster ($299.95) strikes the right balance, delivering genuinely useful tech-enabled goodies, without any of the things you don’t need in a toaster — like an internet connection.

Revolution Cooking’s R180’s most immediately apparent feature is its large, prominent touchscreen display. The screen replaces your typical hardware controls, including buttons and switches, and gives you visual feedback about the toasting process when it’s underway. This is definitely part of the “smart” of the R180’s Smart Toaster designation, but the company’s “InstaGlo” heating technology might be better described as its primary differentiator.

In terms of basic specs, this is a two-slice toaster with slots that are wide enough to accommodate bagels and burger buns pretty easily. It has selectable modes for bagels, sliced bread, English muffins, waffles and toaster pastries (like Pop-Tarts). You can choose between three different heating modes, including “fresh,” “frozen” and “reheat,” and there are seven different darkness levels for browning.

There’s a standby clock display option for when the toaster isn’t in use, and the toaster can provide reminders occasionally to nudge you to remove and empty the crumb tray. 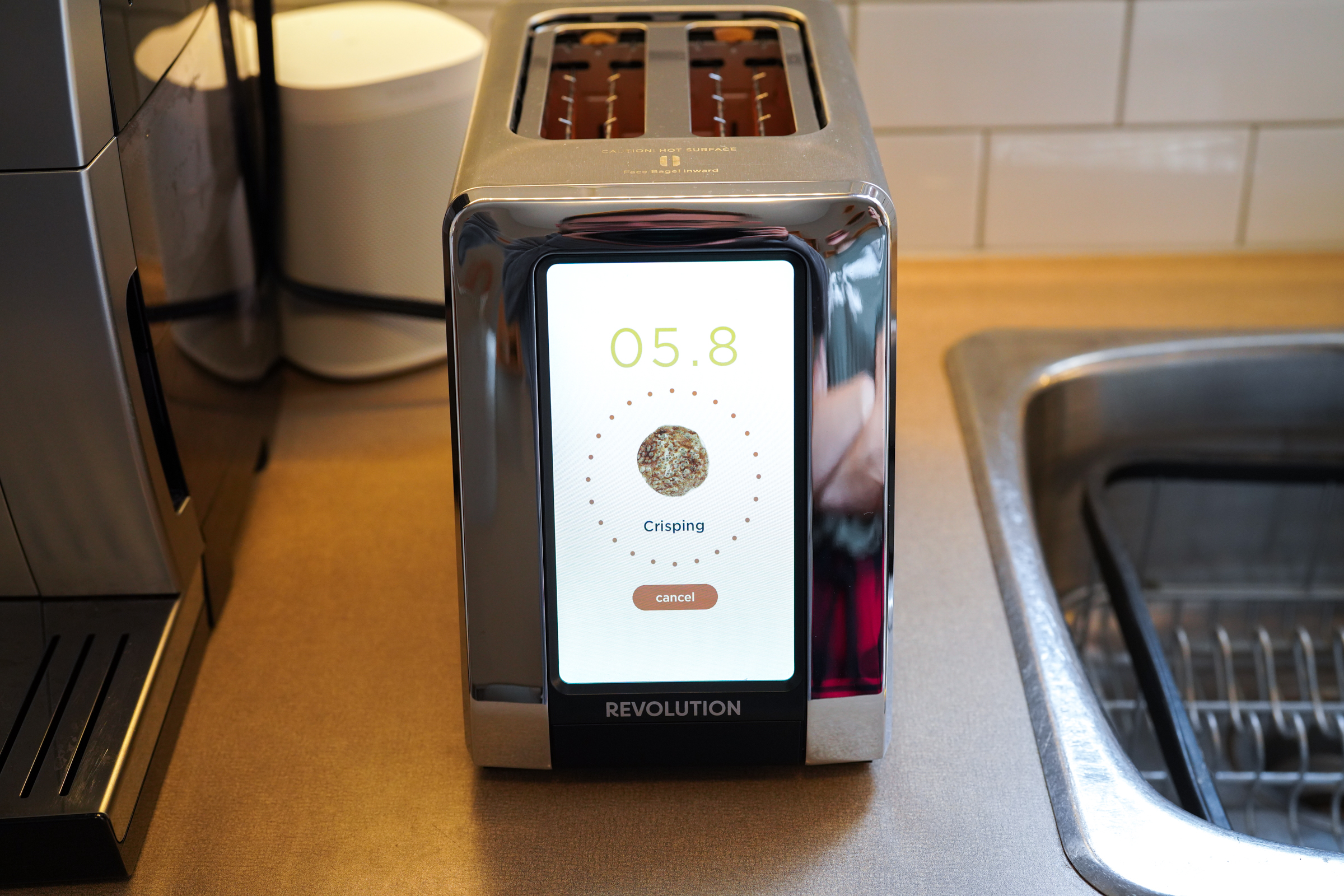 The industrial design of the Revolution R180 is good, without being wacky or overly futuristic. It’s basically a brushed stainless steel rectangle, with a sloped chrome front face and large touchscreen display. The toaster unquestionably looks good sitting on a counter, however, and the slant of its front is a nice touch for ensuring prime visibility and touchscreen control access when you’re using it from a standing position. It’s also relatively compact and won’t take up too much room if you’re concerned at all about counter real estate.

The display is big and bright, and uses capacitive touch so it’s very responsive in terms of input detection. The nice thing about the interface is that even though it’s digital, it keeps things simple — everything you need is on one screen, with a standard cog icon hiding settings that let you do neat but unnecessary things like setting the time and choosing between an analog or digital virtual clock face for the sleep screen.

Using the R180 Smart Toaster is easy — there’s no internet connection to set up or app to install, you just plug it in and it starts up, presenting you with the bread type/browning level/heating mode selection screen. Tap the image associated with what you want to toast, or scroll left and right to reach others, select from the three modes and tap the browning level that corresponds with what color you want the toasted item to mostly closely resemble (the image above updates to reflect this) and hit the “Start” button and you’re off to the races. 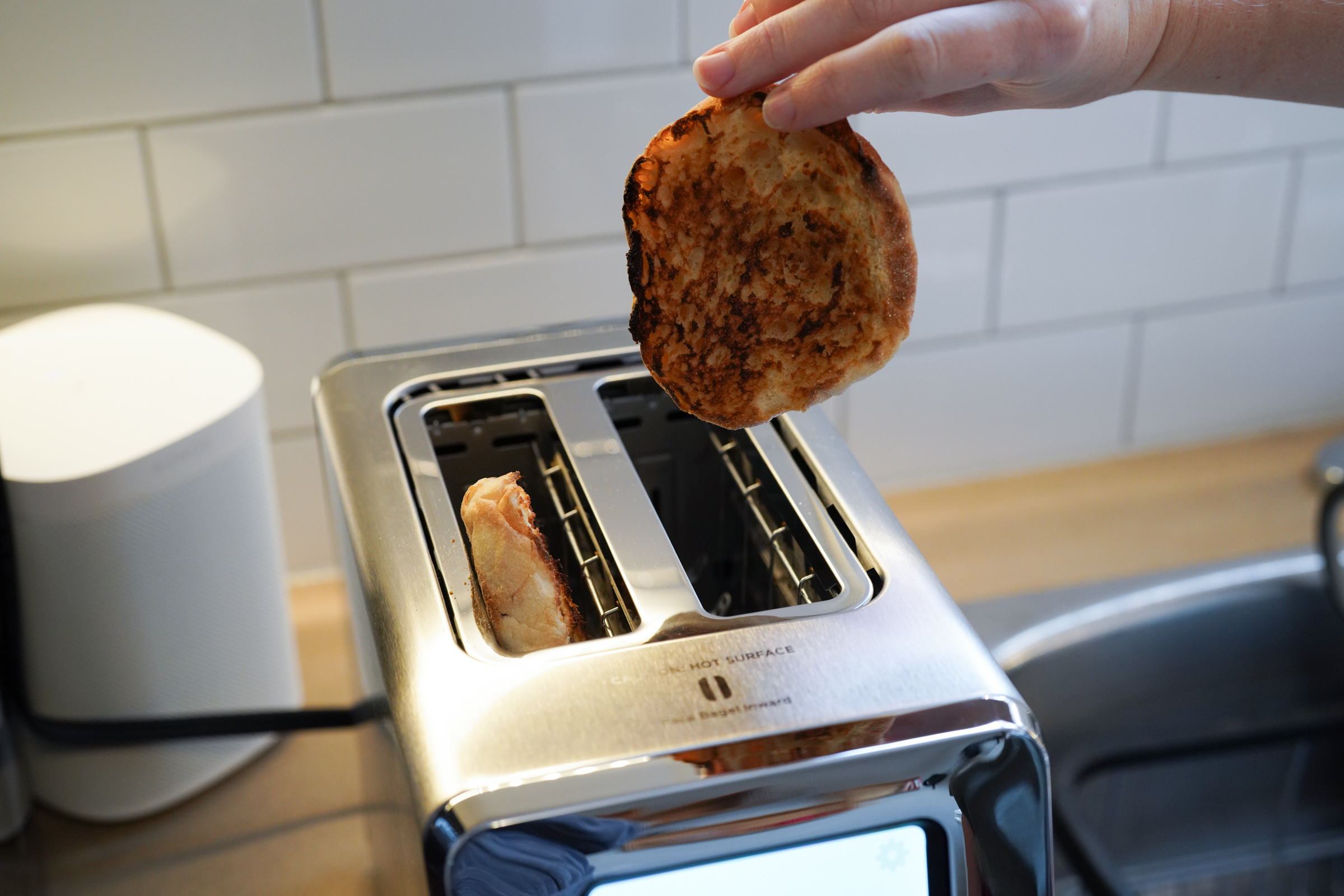 And it really is a race: The Revolution toaster is faster than most. I was perhaps expecting even faster given the company’s marketing claims, but there’s no question that it’s speedier than your average toaster. The other big claim that Revolution makes is about toasting quality, as it promises not to dry out your bread and provide better-tasting end products, even with tricky toasting situations like a combo dethaw and brown.

Here’s the thing: I wasn’t even really aware of these claims the first time I tried out the review unit they sent, but me and my partner both instantly noted how anything toasted in the R180 seemed not nearly as dried out as in our existing Breville toaster. And yet, the toasted parts were crisp and golden at the same time. Surprising as it might sound, Revolution’s claims bear out — the Smart Toaster really does make better-tasting toast.

A $300 two-slice toaster definitely seems like an extravagance — and to be clear, it is — but premium nonsmart toasters already stretch the limits of most home appliance budgets, and Revolution’s main claim to superiority is achieving a crunchy exterior while leaving the inside soft and not dried out, and it does this with aplomb. The touchscreen almost certainly adds to the cost, but it does provide a clear and easy-to-understand interface for setting desired toast goals, and it’s a pretty good-looking countertop clock when not in use. In short, Revolution’s Smart Toaster is just smart enough, and smart where it counts, for a smart appliance — but expensive enough that it’s worth taking a long, hard think about just how much you love toasted things.