China was the first major global smartphone market to rebound from the early days of the COVID-19 pandemic. Stringent lockdown measures were able to help the country recover from the virus relatively quickly during the first wave, as sales started to return well ahead of other areas.

In Q3, however, things have begun to decline again. New numbers from Canalys point to an 8% drop between quarters — and a 15% drop year-over-year. The firm chalks much of the slowdown to longtime market leader Huawei’s ongoing issues with the U.S. government. The problems had a kind of cascading effect that served to impact the number two companies, Vivo and Oppo. 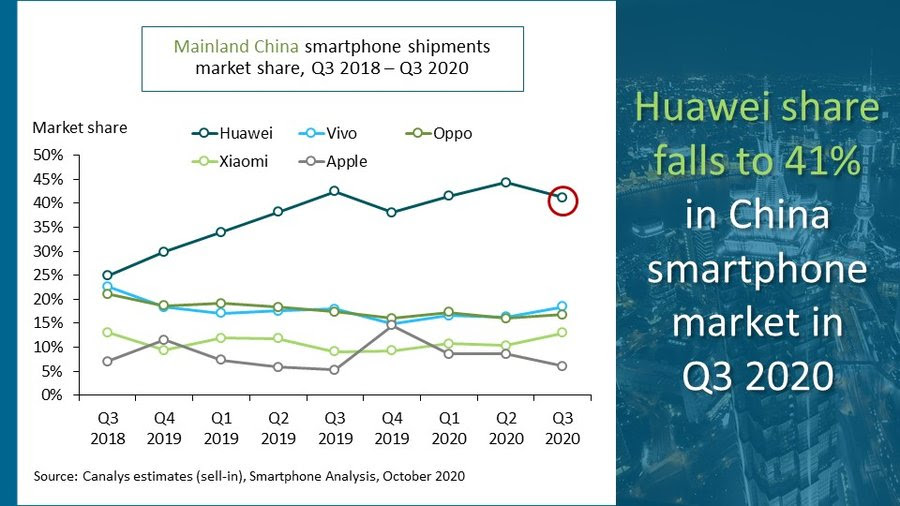 “Huawei was forced to restrict its smartphone shipments following the August 17 US sanctions which caused a void in channels in Q3 that its peers were not equipped to fill. Huawei is facing its most serious challenge since taking the lead in 2016,” analyst Mo Jia said in a release. “If the position of the US administration does not change, Huawei will attempt to pivot its business strategy, to focus on building the [Harmony] OS and software ecosystem, as the Chinese government is eager to nurture home-grown alternatives to global platforms.”

Smartphone shipments dropped 18% in China, thanks to COVID-19

Huawei dropped 18% in Mainland China, year-over-year. Vivo and Oppo posted similar declines at 13% and 18%, respectively. Xiaomi was able to make up ground at third place, gaining 19% y-o-y per the figures. Apple, meanwhile, remained relatively steady, in spite of the delated launch of the iPhone 12. Huawei’s continued struggles could provide a vacuum for the competition to fill.

Analyst Nicole Peng notes that the arrival of the 5G handset put the U.S. company in a strong position, looking forward: “iPhone 12 series will be a game changer for Apple in Mainland China. As most smartphones in China are now 5G-capable, Apple is closing a critical gap, and pent-up demand for its new 5G-enabled family will be strong.”