Here’s an example of ad targeting that’s actually good for public health: In a campaign encouraging people to wear masks, the Illinois state government has been focusing its digital ad dollars on the counties with the highest COVID risk.

To achieve this, the government’s been working with Civis Analytics, the data science company founded by Dan Wagner, who was previously chief analytics officer for Barack Obama’s 2012 reelection campaign. The campaign kicked off in August, but the state is now sharing more details about its work, including a map that shows the week-by-week risk assessment that it used for targeting.

Crystal Son, Civis’ director of healthcare analytics, explained that every week, her team pulls together the latest county-level COVID data for Governor J.B. Pritzker’s team, who then use it to determine where ad dollars for the It Only Works If You Wear It campaign should be spent.

Cameron Mock, chief of staff at the Governor’s Office of Management and Budget, said in a statement that the government is using “a one-of-a-kind formula to concentrate media dollars in the areas with the most risk.”

Mock continued, “The risk-based formula uses trends of cases and mobility on the county level to designate higher, medium and lower-risk counties. It then uses a pro rata share to dedicate the most dollars to the highest-risk areas.” 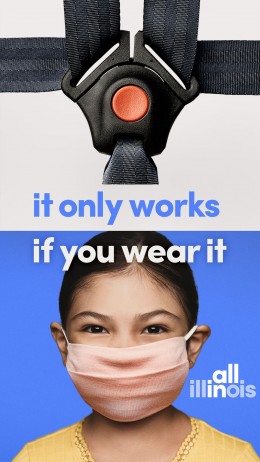 This formula divides counties into five tiers, with Tier 1 being the highest risk and Tier 5 being the lowest. Tiers 4 and 5 still receive a baseline level of ad spend, but Tier 3 counties see more spending and Tiers 1 and 2 receive the maximum amount.

While the mask campaign isn’t limited to online advertising, the formula is only being used on the digital side because it’s more difficult to adjust funding for more traditional ad channels on a week-by-week basis.

“Each county has unique and changing circumstances due to the virus, so we designed this campaign to respond to the on-the-ground situation in all 102 counties in Illinois,” said Alex Hanns, deputy press secretary to Governor Pritzker, in a statement. “As an area’s risk increases, so too will its concentration of public health messaging. As the pandemic continues and another wave of coronavirus looms, the state of Illinois will continue to listen to scientists and follow the data to keep our residents safe.”

Son said she’s not aware of any other campaign responding to COVID-19 that uses a similar model to prioritize spending in the highest-risk geographies. Is it working? While this data doesn’t show the effects of a specific campaign, according to Carnegie Mellon University, 89% of Illinois residents wear masks — currently the 15th-highest usage rate in the U.S.

In the future, Son said she’s hopeful that we’ll see other organizations adopt “a much more customized communications approach” for healthcare.

“We still have the habit in healthcare of treating groups of people as if they are homogenous, as if they all act the same and think the same,” she said. “There are widespread applications beyond mask-wearing for more tailored approaches.”