The Ottawa-based provider of e-commerce services for retailers reported earnings of $133.2 million, or $1.13 per-share, for the third quarter after posting a loss of $33.6 million, or 29 cents per-share, in the same period last year. Analysts tracking the company had expected earnings per-share of 52 cents. 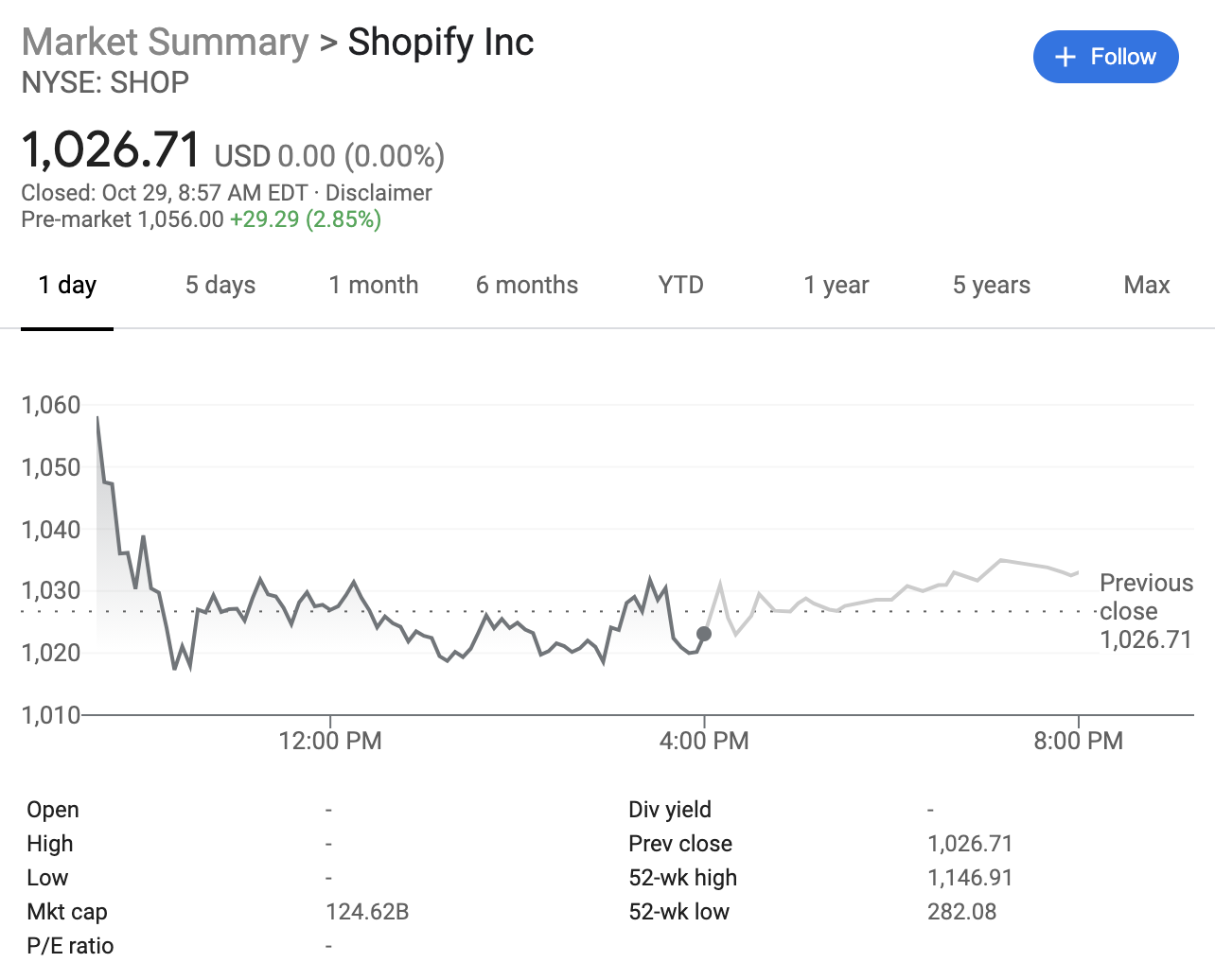 Pretty much everything about the company’s business looked good, partly driven by plummeting brick-and-mortar retail sales as health regulations to limit the spread of the novel coronavirus like occupancy constraints have slowed down foot traffic.

Shopify’s $767.4 million in revenue for the quarter was up 96% from a year ago and handily beat the expectations of analysts who were predicting for the company to bring in roughly $658 million. Operating income was also up from the year-ago period, with Shopify calling about $50 million, or 7% of revenue, compared to a nearly $36 million loss for the year-ago period. Adjusted operating income was nearly $131 million.

“The accelerated shift to digital commerce triggered by COVID-19 is continuing, as more consumers shop online and entrepreneurs step up to meet demand,” said Harley Finkelstein, Shopify’s president, in a statement. “Entrepreneurs will be the force in rebuilding economies all over the world, which makes it even more important for Shopify to innovate and build the critical tools that merchants need to succeed in a low-touch retail environment.”

“Shopify’s tremendous third-quarter results reflect the resilience and entrepreneurial spirit of our merchants,” said Amy Shapero, Shopify’s CFO. “More entrepreneurs are signing on to Shopify so they can quickly and easily put their ideas into action. We continue to evolve our global commerce operating system to make it easier for merchants to get online and start selling, get discovered, and get their goods to buyers, while providing a delightful shopping experience.”

Shopify is interesting not only for its own revenue, but what its revenues say about the health of direct-to-consumer retail businesses — some of which have raised significant investment from venture capitalists.

Looking at the company’s merchant solutions revenue, which grew by 132% to $522.1 million — the state of these direct-to-consumer companies’ bottom line must be pretty healthy. Gross merchandise volume, the figure from which Shopify derives its merchant solutions gains, was $30 billion. That figure is an increase of $16.1 billion over the year-ago period.

Shopify is sitting on a pretty hefty financial cushion with $6.12 billion in cash and equivalents, up from $2.46 billion at the start of the year.

Outside its financials, Shopify is making moves to expand its footprint in social commerce through a recent partnership with TikTok, announced yesterday. The deal should enable more Shopify sellers to reach TikTok’s audience by marketing directly on the platform using a toolkit integrated with Shopify’s dashboard, the two companies said.