“Folks with [criminal] records have always, since prisons were first built, lived in the shadows,” 70 Million Jobs founder Richard Bronson told TechCrunch. “They’ve lived in fear and in shame — afraid to emerge with this terrible stigma, being treated as second-class citizens in every single way.”

The unemployment rate for formerly incarcerated people, as of 2018, is 27%, according to Prison Policy. As a result of the pandemic, however, that percentage is likely much higher.

But in addition to facing barriers in employment, formerly incarcerated people face barriers to accessing stable housing and financial services. These types of barriers are a key driver of recidivism for the more than 600,000 people who are released from prison each year. Between 2005 and 2014, an estimated 68% of people released in 2005 were arrested again within three years. Within nine years, 83% of those released in 2005 were re-arrested, according to the U.S. Department of Justice’s Bureau of Justice Statistics.

Bronson said he believes Commissary Club is in an ideal position to service this community. Already, through 70 Million Jobs, there are millions of people Commissary Club knows how to reach. 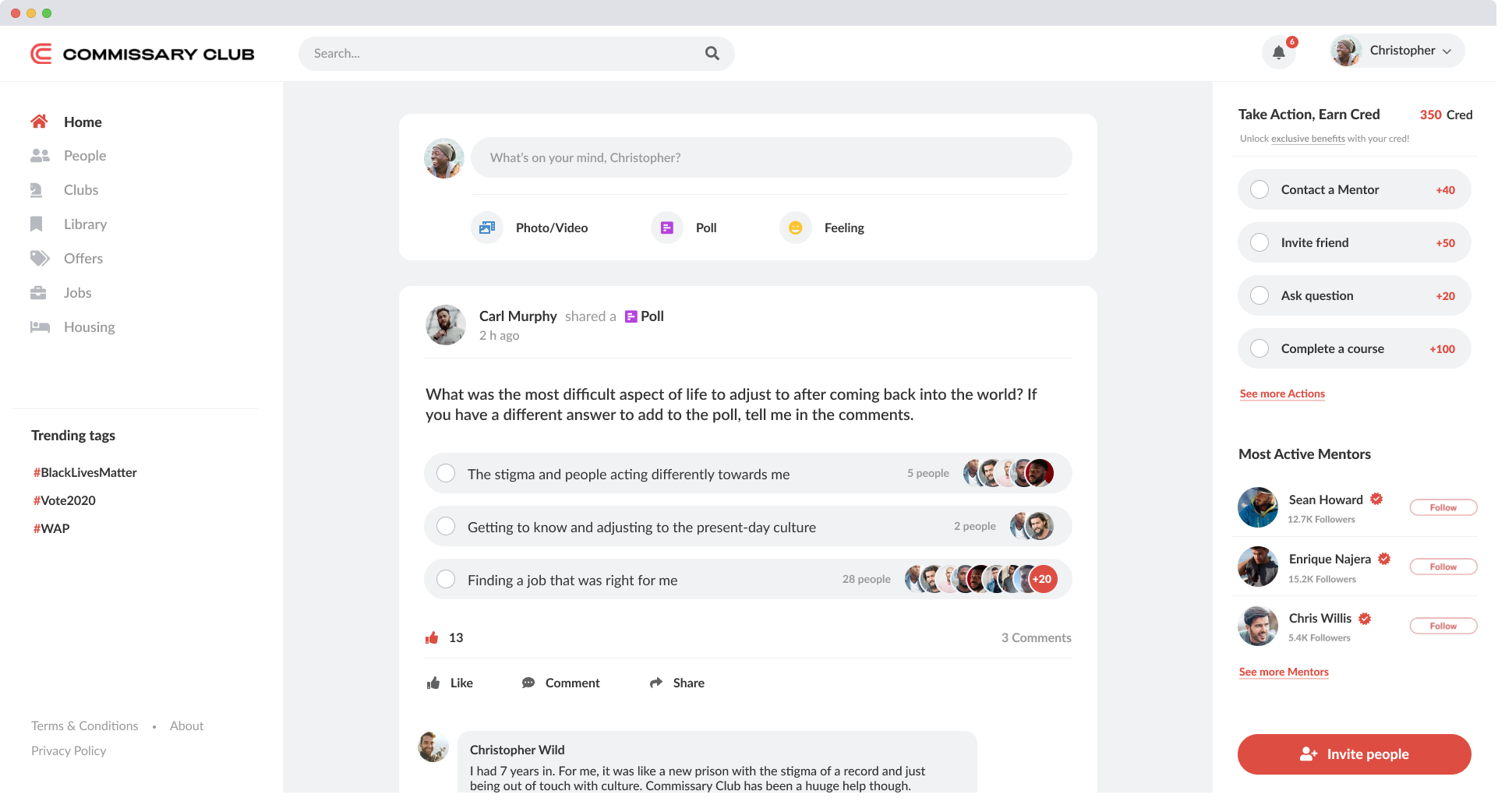 Bronson says he’s felt encouraged by the Black Lives Matter movement and the Women’s March. It’s shown him, he said, the power of being connected and coming together with one voice.

“At a certain point we say enough is enough,” Bronson, who himself spent a couple of years in prison, said. “We are entitled to everything. We’ve done our time and we paid the price. Is it really fair for us to be walking around with a life sentence? I just think no one has really tried to galvanize them and by being separated, they lack connections, they lack help, inspiration and role models. And what they really lack is friendship. When you come out of prison, you don’t know how to navigate these critical aspects. We aim to be that help.”

Bronson said it’s not lost on him that he has white privilege, has a background in finance and therefore undoubtedly had an easier time transitioning from prison back into society. For some context, Black people make up 40% of the incarcerated population despite only making up 13% of the U.S. population, according to Prison Policy. Meanwhile, people in prisons and jail are also disproportionally poor compared to the overall U.S. population. Still, he said it was harder than he expected.

Ameelio wants to take on for-profit, prison-calling rackets after starting with free letters to inmates

“It didn’t escape me that if it’s this hard for me, what it must be like for the guys I was in prison with who had limited job experience and education,” he said.

The plan with the social network is to take an ad-based approach, along with referral fees for things like online classes and wellness services. Commissary Club also plans to partner with brands and host events for the community.

“The population we serve is really desperately in need of help,” Bronson said. “But we’re not in position to provide all of it. We’re going to be a concierge for folks.”

But there’s an obvious risk with bringing formerly incarcerated people together and serving them on a platter to advertisers, given that some are notoriously predatory.

“I feel incredibly protective of our clients because there are bad actors,” Bronson said. “We’ve seen people try to come to our job business and gain access for their less than positive ends. So we’ve gotten smart and also sensitive to the fact that this could go on. We make damn sure that whoever we’re working with is operating with integrity and honesty. We’ve been in this space for a long time and we know the good lawyers and bad ones, the good education platforms and bad ones and many other verticals with good actors and bad actors.”

Commissary Club launched a few days ago in beta and currently has thousands on the wait list. But the service is doing a slow rollout because, Bronson said, “we want to get it right.”

To date, parent company 70 Million Jobs has raised $1.6 million from investors and is seeking an additional $2 million in funding.