Six years ago, Amazon essentially created a new consumer electronics category. Expectations weren’t particularly high when the first Echo device debuted in November of 2014. Amazon, after all, has never shied away from throwing a new device against the wall to see what sticks — if anything, that’s become a defining characteristic of the last half-dozen years of Alexa devices.

The Echo stuck. In 2019, 146.9 million smart speakers were shipped globally, according to figures from Strategy Analytics. That figure marked a 70% increase over the year prior. Of that figure, Amazon owned a 26.2% market share.

Amazon’s Echo gets a decent-sounding refresh

That’s a success story by any measure. Of course, any competition present is also a knock-on effect of Amazon’s success. Google’s original Home speaker was released two years later, and Apple’s HomePod came out the year after that. While each certainly offered their own unique take on the category, it’s hard to imagine them making the same mark had Amazon not helped define the smart speaker category way back when.

Along with being the smart speaker grandaddy, Amazon’s also updated its devices with the most frequency. Google Home just got its second iteration (now Nest Audio) and the original HomePod is still on its first version. Last month, we got the fourth generation versions of both the Echo and the Echo Dot. The refreshes are about more than just getting people to buy new devices (of course, that’s a big part of it, too) — they’re also about adapting to learnings about how people use these sorts of devices. 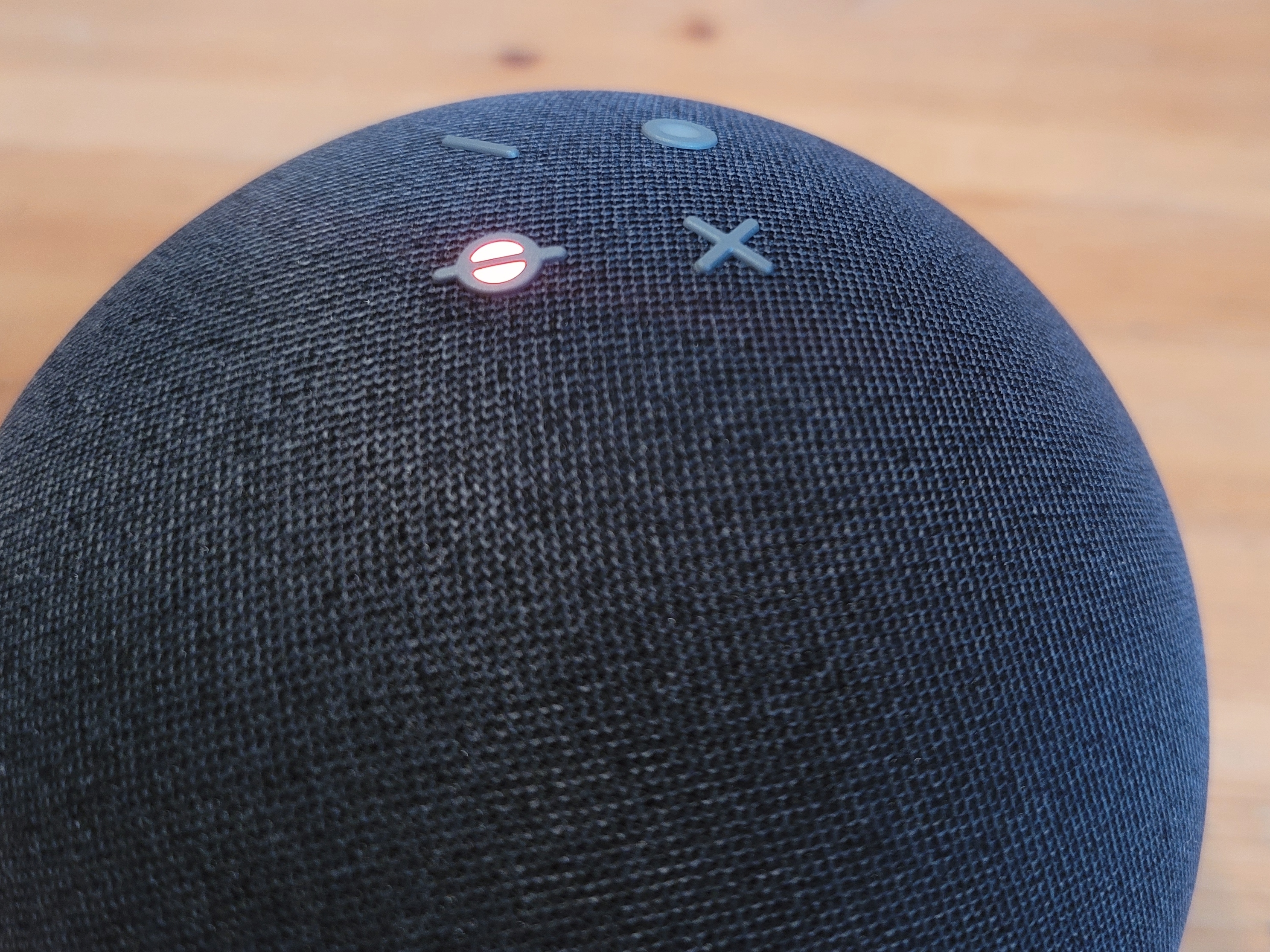 After all, the original Echo had little to go on beyond internal testing. Take audio. The initial Echo was smart first and a speaker second. Sure it could play music, but that was really just a secondary feature. First and foremost, the product was about conversing with Alexa. In 2017, however, Apple showed everyone the importance of focusing on audio quality with the HomePod. For many consumers, it made a lot more sense to purchase a quality speaker with an assistant built in, rather than a purpose-built smart speaker with lousy audio quality.

Subsequent versions of the Echo started to prioritize audio. Of course, the company never really did so to such a degree that the entry-level product could stand toe to toe with, say, the HomePod (though the Echo Studio is an attempt to approximate that on a somewhat tighter budget), but audio has increasingly become less of an afterthought across the company’s product line.

This year’s redesign centers on an audio upgrade yet again, along with an aesthetic overhaul that attempts to focus some of that newfound sound. The fourth-generation Echo is, in a word, round. Eschewing generations of cylinders, the company has gone with a design that is perfectly spherical (except the flat bottom to stop it from rolling off your table top). I suspect one learning that lead to the new design was where users place speakers in their homes. 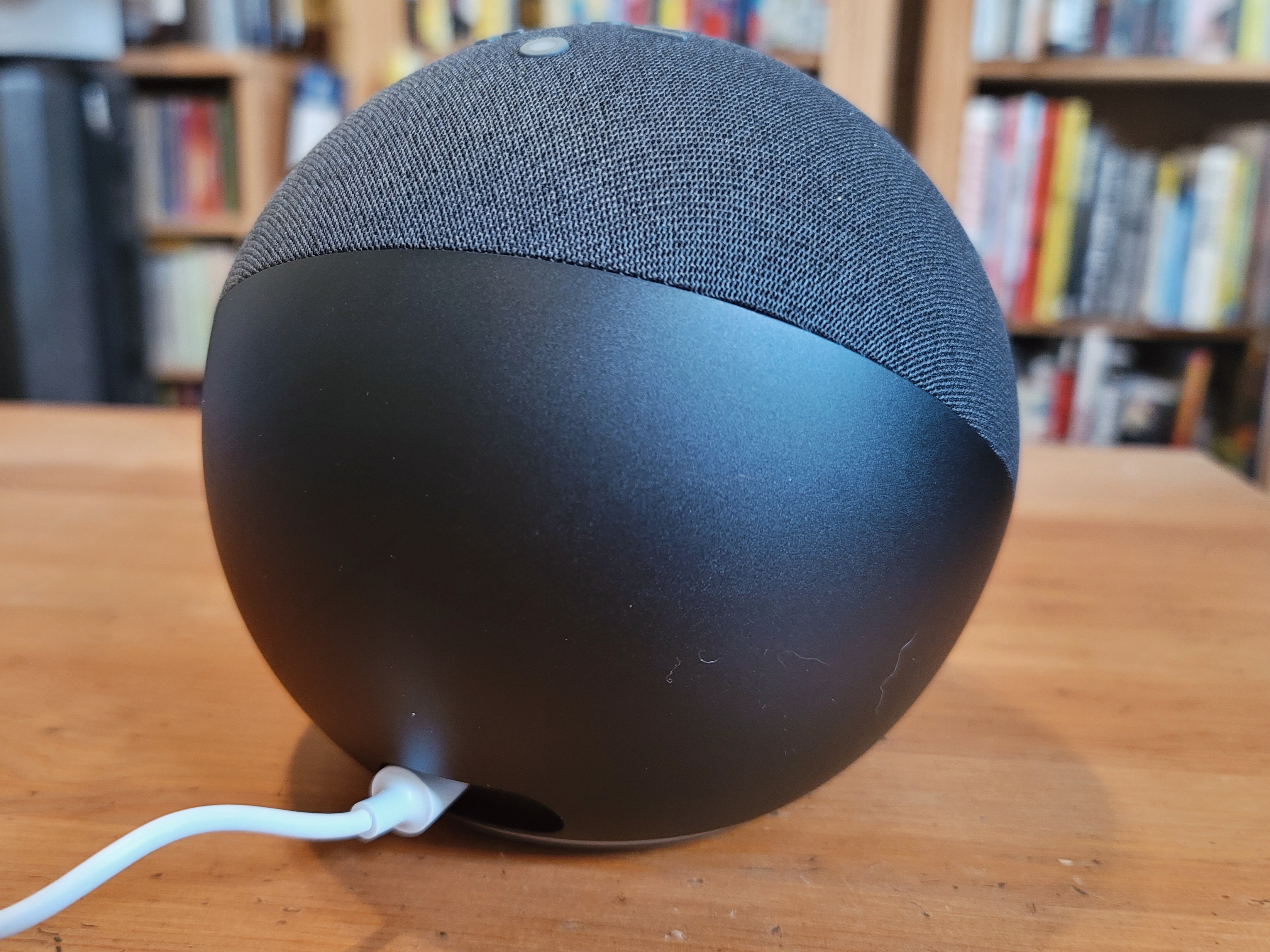 Previous generations have been focused on a more three-dimensional listening experience, assuming, I suppose, that people are sticking these speakers in the middle of a room, rather than up against the wall. While the new Echo is round, however, the hard plastic bottom arcs upward, monopolizing about two-thirds of the device’s back. This time out, the company’s opted for a pair of front-firing 0.8-inch tweeters (one more than gen-three), coupled with a three-inch woofer (same as last year).

The speaker leans a but too heavily on the bass by default for my tastes, though you can adjust those setting via the Alexa app (I took it down about two notches). The sound quality is solid for the size and price point. I was able to get pretty decent playback listening to Spotify. Head to head, I think the Nest Audio delivers a richer, fuller sound — and if you’re currently assistant-agnostic, that’s the one I’m recommending based purely on sound.

Of course, the sound is much fuller if you’ve got a pair of the $99 devices in stereo mode. Amazon thoughtfully sent along two for testing that feature specifically. A similar feature is available for both Google’s Nest devices and Apple’s HomePod and HomePod Mini. Given that two Echos are roughly the price of one Echo Studio, the math might make sense, depending on your home setup.

I do like the design here. Though sitting next to the Nest Audio, it’s hard to shake a sense of convergent evolution with all of these smart speakers. As it happens, both of my review devices are the same color, and really look like they could have sprung out of the same product line, with their dark fabric coverings. I do, however, appreciate the design work that’s being done to make them feel a bit more subtle than previous generations — and in a sense part of the furniture.

As I mentioned in my recent review of the Echo Dot (which is physically identical to the Echo in all but size), I’m a bit less thrilled with the design to move the light ring to the bottom. I understand practically why the company did this: it wouldn’t have made sense to slice up the round design with a light ring. But the new design only makes sense if the Echo is close to eye level. Otherwise you’re reliant on its reflection from the surface on which the device sits. 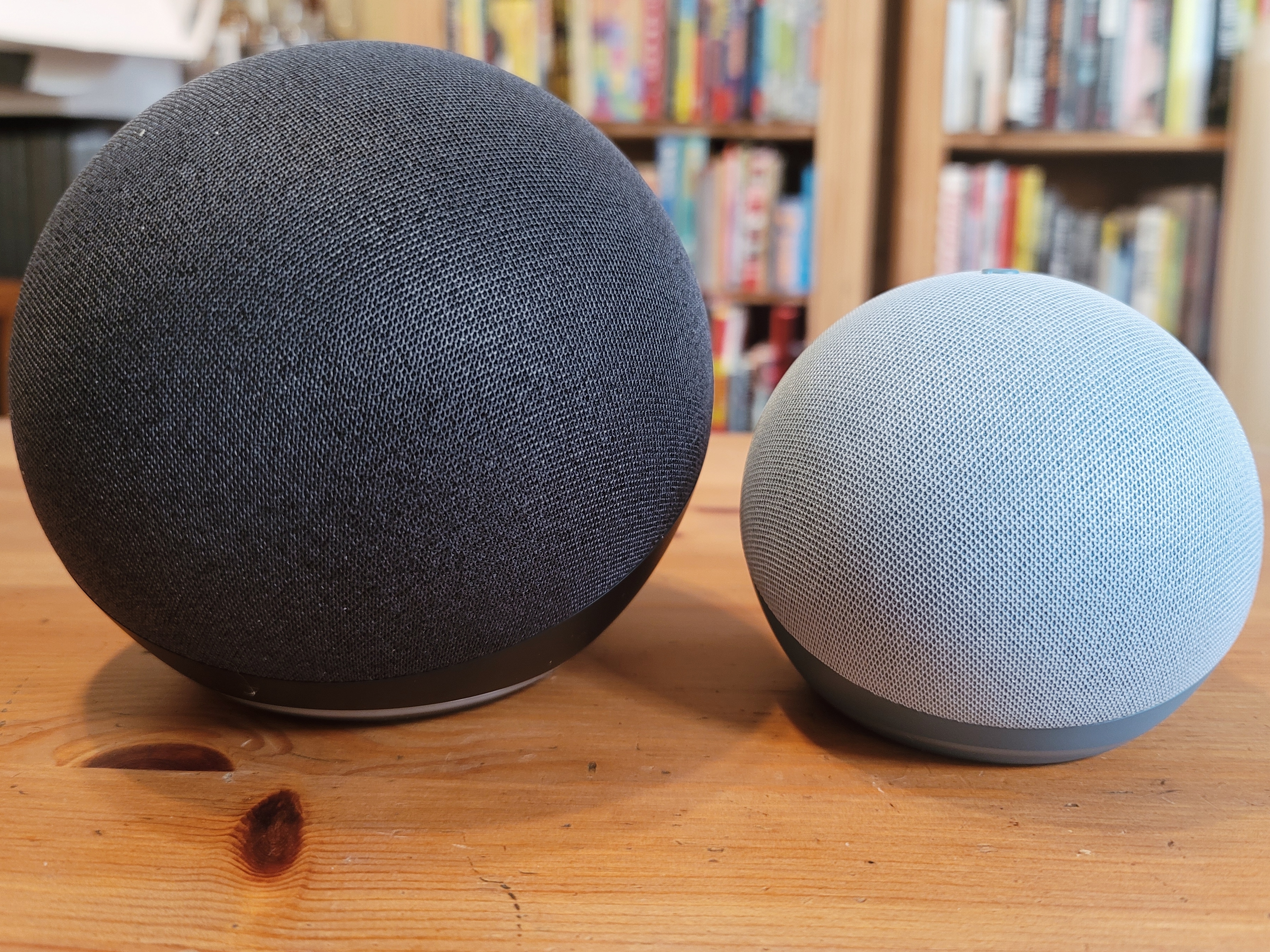 The biggest upgrade here, however, may be the inclusion of a Zigbee hub, which negates the existence of the Echo Plus. It was only a matter of time before the Echo became a smart home hub, and it’s nice that Amazon’s found a way to incorporate that into a device at this price point. It’s a big part of the company’s push to corner the smart home control market. Notably, the new Nest Audio also offers the feature.

An interesting surprise addition is the temperature sensor. In addition to local weather, asking “Alexa, what’s the temperature in here?” it will offer up an average temperature for the room where the Echo resides. Not exactly necessary, but helpful information, I suppose. 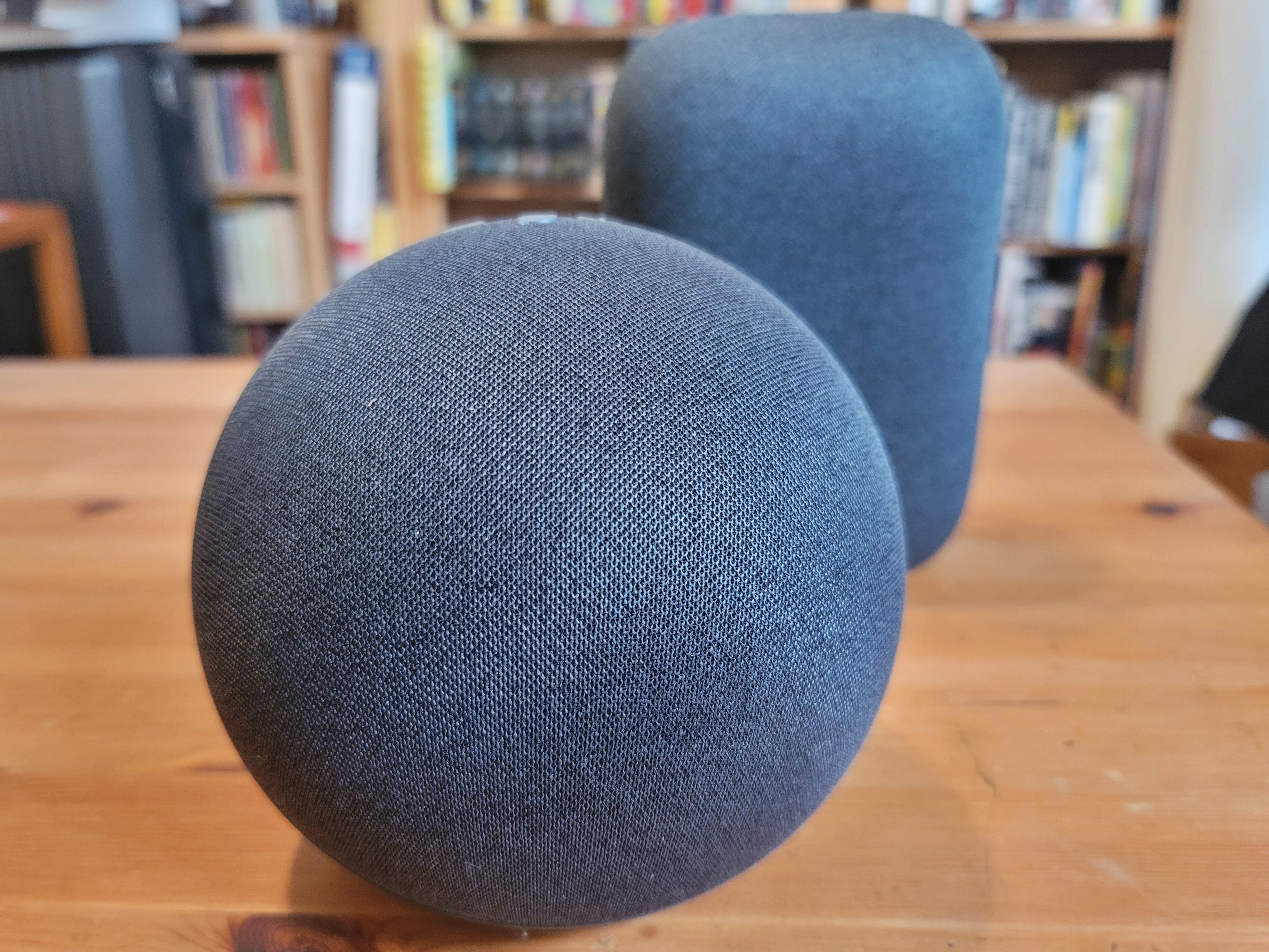 Amazon’s nearly annual updates to the line ensure that no new generation represents as radical an upgrade as the one we just saw between Google Home and Nest Audio. But all in all, Amazon’s presented us with a nice little refresh here.

Nearly 70% of US smart speaker owners use Amazon Echo devices