Investors do not seem concerned that the Department of Justice filed an antitrust suit against Google earlier today.

The suit, seen by some as a stunt near the election, is one of a multi-part push to change the face of the technology industry, which has seen its wealth and power expand in recent years. For example, technology companies now constitute nearly 40% of the value of the S&P 500, ahead of a 1999-era 37% share, according to The Wall Street Journal.

At the same time, the rising tide lifting many tech boats has provided huge gains to its largest players as well. Alphabet, Microsoft, Amazon and Apple are each worth north of $1 trillion apiece, making them historically valuable companies even amidst an economic downturn.

Those market caps do not appear to be in danger.

Today after lunch during regular trading hours the tech-heavy Nasdaq Composite index is up 0.86%, while Alphabet is up 0.91%, directly in line with broader trading. Shares of Alphabet initially rose this morning before giving back their gains. However, since those morning lows, shares of the tech giant have recovered to edge ahead of the market. 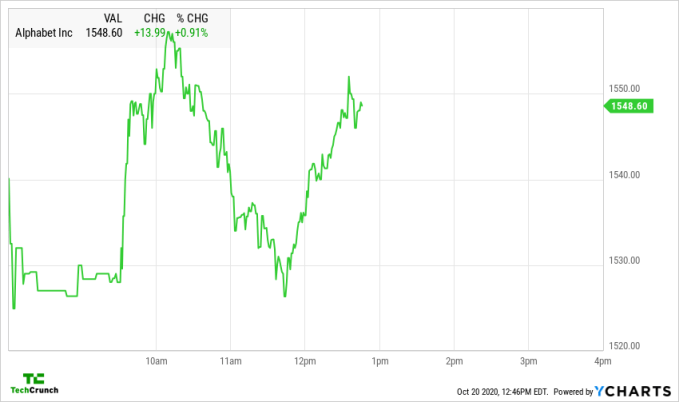 Investor reaction could shift regarding Google’s antitrust liabilities in time. The Department of Justice suit is hardly the only legal issue that the search giant is currently grappling with. But not today.