Sixteen years ago a group of material scientists and engineers at General Electric banded together to reinvent the circuit breaker. Now, Menlo Microsystems, the spin-off commercializing that technology, is ready to bring its revolutionary new switches to market, with huge implications for everything from 5G technologies to quantum computing.

Based in Irvine, California, Menlo Micro takes its name from the Menlo Park, New Jersey research lab where Thomas Edison patented the first light switch back in 1893 — and the company’s ties to GE run deep.

Researchers at GE spent more than a decade working internally on Menlo Micro’s core technology, a novel process that applies semiconductor manufacturing techniques to the production of micro electro-mechanical systems, before spinning it out into a new business five years ago.

Using a novel alloy, Menlo Micro is able to reduce the size of the switches it makes to 50 microns by 50 microns, or roughly the width of a human hair. This miniaturization can enable hardware manufacturers to come up with completely new designs for a host of products that used to require much larger components.

“The micro electro-mechanical system that we use to make this… that’s not new,” said Russ Garcia, the company’s chief executive. “The problem was — the first level innovation is how do you take a mechanical switch like the light switch or a relay and scale that down to a wafer.”

Many companies have tried to make MEMs contact switches, spending hundreds of millions of dollars, but Garcia said that the reliability and durability of the switches was always an issue. The material science behind Menlo’s switches solves the problem, he said.

The company’s founders think the potential uses are pretty limitless, thanks to the massive size reduction and increased durability that its switches offer. 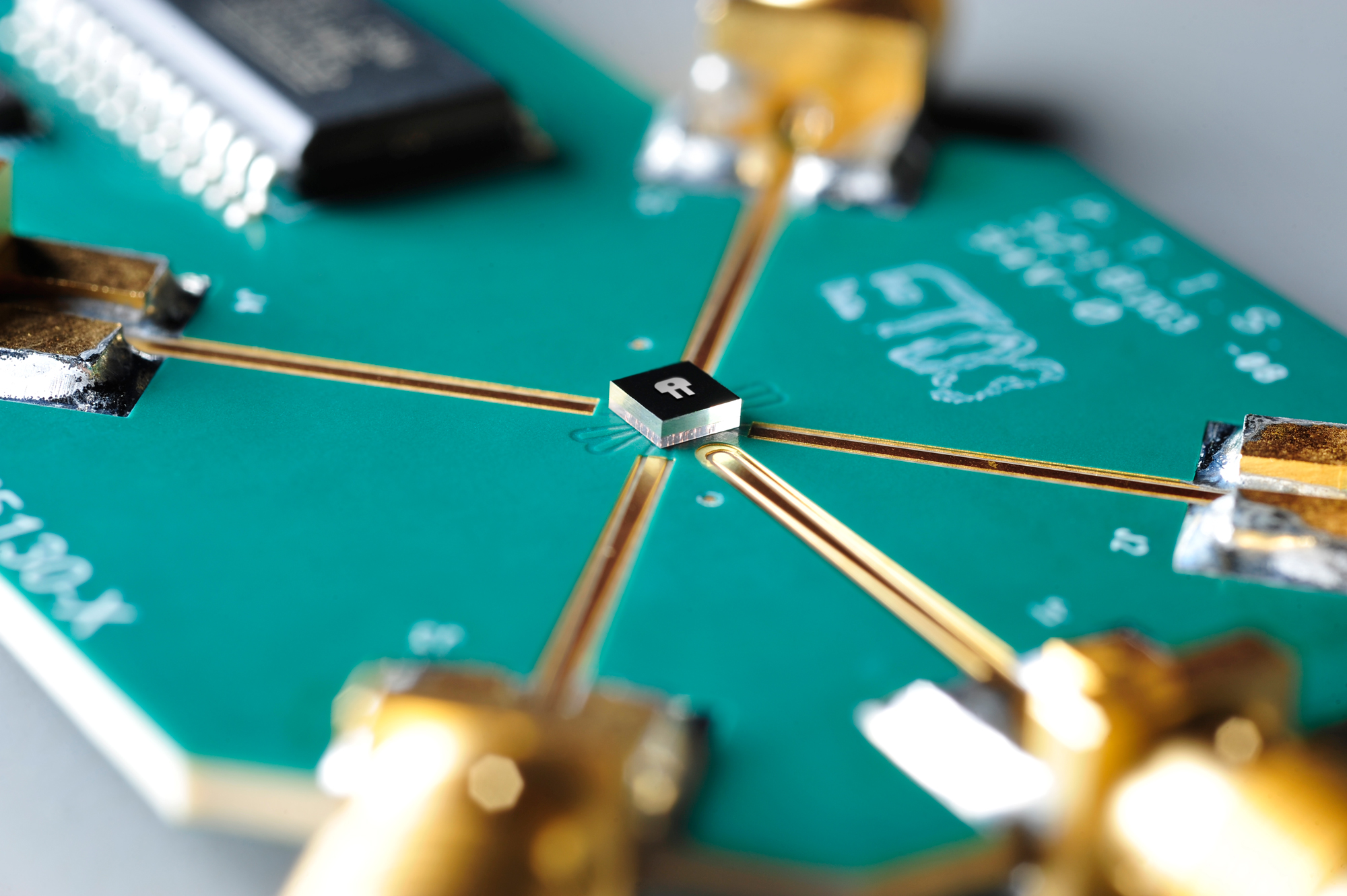 “One way to look at this is in edge and IOT applications,” said company co-founder Chris Giovanniello, a former vice president of business development at GE Ventures and Menlo Micro’s current senior vice president of worldwide marketing. “What we tend to think about and what most of the industry thinks about is low energy Bluetooth and Wi-Fi and low power processing for decision making. Once you’ve sensed it, communicated it and made a decision, you have to do something about it.”

Initially Menlo Micro spun out from GE with Giovanniello and co-founders including chief technology officer Chris Keimel and Jeff Baloun, the senior vice president of operations. Garcia, who saw the company’s initial pitch at a semiconductor conference where GE was touting the technology, was brought on board by one of Menlo Micro’s early investors, Paladin Capital Group.

Arm’s financials and the blurring future of the semiconductor sector

“Paul Conley of Paladin Capital sent me this deck and said ‘Wow there might be something there.’ We met Chris and then met up with the other Chris they wanted me to help out with strategy,” Garcia said. He wound up coming on board as a founding executive.

Current solid state technologies tasked with making something happen based on the data currently use more power than the rest of the systems that they’re tied to. Menlo Micro’s chips would substantially reduce energy loss and improve the efficiency of entire systems, he said.

“If you think of the light switch in your house, it’s two metal contacts that come together. If that contact is really good and clean the electricity flows through very efficiently and when you turn it off… no electricity can flow through and [nothing] happens at all,” said Garcia, a longtime executive in the MEMS industry. “In a semiconductor, there’s loss in that contact. When you run a transistor on it it allows the energy to flow through but loses some of that energy in heat, and when you turn it off it allows some of that energy to flow through. When you take the billions of switches… all of that incremental energy is completely lost.”

The benefits of the technology mean demand from the defense industry, which wants to put the new switches in radar, radio and satellite networks. Commercial applications include Wi-Fi connectivity, 5G cell networks and for radio frequency and microwave switching. Consumers could see the switches in cell phones meaning fewer dropped calls, higher speeds and capacity for data, and longer battery life.

Menlo has already sent samples from its production line to 30 lead customers in aerospace and defense, telecommunications and test and measurement. And the company has raised $44 million in new funding from investors, including Nest founder Tony Fadell’s Future Shape Group, to boost its production capacity to meet potential demand.

“The concept of an ‘ideal switch’ was theoretical — something companies have been working to achieve for decades — until Menlo Micro,” said Marianne Wu, the former head of GE Ventures and current managing director of 40 North Ventures, which led Menlo Micro’s latest round. “We are incredibly excited to work with such a dynamic, experienced team on a core technology that is disrupting nearly every industry.”

Series of Menlo Micro switches on a circuit board. Image Credit: Menlo Micro

Over the last 30 months, Menlo Micro said it has completed the transfer and qualification of its manufacturing process, moving from a four-inch research fab to a new eight-inch high-volume manufacturing line.

That means the company is able to increase production for its initial products and boost its capacity. With the qualification in hand, the company expects to bring production up to over 100,000 units per month by the end of 2020 and reach production capacity for millions of switches per month in 2021.

So beyond telecommunications and defense, there are target markets in energy storage, automotive and aerospace because of the miniaturization — while quantum computing companies are interested in the technology because of its durability.

“The relay is a large mechanical device that you can hold in your hand and used in many applications for turning on and off the power that goes to an industrial piece of equipment to your car to motors that need to be driven,” said Giovanniello. “They’re very hard to integrate because they’re so big. We can take the electrical characteristics of having a true metal to metal on low-loss connection and then, when it’s open there’s an air gap that no current can flow through… We can integrate [the switches] into completely different architectures.”

Ultimately, Giovanniello said the go-to-market strategy is to focus on the “rule of 99.”

“We’re able to reduce the size, the weight and the power of the box that [the switch] is going into by up to 99%. That’s a huge improvement in infrastructure and cost,” he said.

For companies developing quantum computers, the value proposition is not just about the size of the MEMS, but the durability of the alloy that Menlo Micro has developed. “For quantum, you have to have devices that operate at close to absolute zero… Semiconductors don’t work down to those temperatures so they use old-fashioned mechanical relays [which] can take hours to get back to temperature,” Giovanniello said. “Our materials are so robust they work [at temperatures] down to a few milikelvins.”

It’s this flexibility and the potential redesign of old industrial technologies that haven’t been updated for nearly a century that has enabled the company to bring in $78 million in funding from investors, including Piva, Paladin Capital Group, Vertical Venture Partners, Future Shape and strategic investors like Corning and Microsemi.

“For 40+ years, the industry has been searching for a switch that has the perfect combination of  the electromechanical relay and the silicon transistor,” said Tony Fadell, in a statement. “[This technology] is a tiny,  efficient, reliable micro-mechanical switch with unmatched RF-performance and, counterintuitively, high-power handling of 1,000s of Watts. As our world moves to the  electrification and wireless of everything, Menlo Micro’s deep innovation is already triggering  massive cross-industry upheaval.”