Evan Weinstein, the founder of the Philadelphia-based startup, Cocoa Press, which makes a 3D printer for chocolate, doesn’t have much of a sweet tooth. But the young founder was fascinated by 3D printing technologies and was looking for a way to move the technology forward. “I stumbled on chocolate,” Weinstein said. And the result, was Cocoa Press.

The chocolate printer takes advantage of the fact that there’s something about food that people connect to, Weinstein has said, and that’s especially true of chocolate.

Worldwide, chocolate was a $130.5 billion industry in 2019, according to a report by GrandView Research, and Weinstein thinks that his printers can help amateur hobbyists and chocolate enthusiasts bite into that market.

The University of Pennsylvania graduate started developing the technology that would become his first business as a high school student at Springside Chestnut Hill Academy, a private school in Northwest Philadelphia.

After documenting his progress on his personal blog, Weinstein hung up his cocoa nibs at Penn while he pursued his undergraduate degree. But he could never fully rid himself of the chocolate addiction, so he picked the project back up as a senior and returned to the chocolate shop.  A 2018 video from Weinstein shows the printer at work.

With a few grants from the University and a bit of funding from its Pennovation Accelerator, Weinstein began building in earnest and the company is now ready to take pre-orders for his $5,500 printer.

As he moves toward commercialization of his confectionary creation, Weinstein is following in some illustrious cocoa-dusted footprints. Five years ago, none other than Pennsylvania’s most famous chocolatier, Hersheys, tried its hand at a chocolate 3D printer. The company took its novel technology on the road and showcased its technical feat at a number of demonstrations, but the project melted under the harsh glare of unfeasible economic realities.

Weinstein has actually talked to the Hersheys folks and believes that his product can be a stickier proposition for consumers and businesses.

“They never ended up creating a sellable printer,” Weinstein said. “I’ve been able to connect with Hershey because they’re the main sponsors of the Pennovation Center… [they said] the limitations at the time were technical limitations, but the customer feedback that they got was really positive.”

That means, as far as Weinstein is aware, his is the only chocolate printing company in the U.S.

The first chocolate bar was created by the British chocolatier J.S. Fry and Sons in 1847, molded from a paste made of sugar, cocoa butter, and chocolate liquor. But it wasn’t until Daniel Pieter and Henri Nestle brought milk chocolate to the mass market in 1876 and Rudolf Lindt invented the conch machine to mix and aerate chocolate in 1879 that the bars really took off.

Form factors haven’t changed much since then, but Cocoa Press promises to change that, according to Weinstein.

The company sources its chocolate from the biggest white label chocolate providers on the market, The Guittard Chocolate Company and Callebaut Chocolate and will resell chocolate refills to its customers to create a recurring revenue model. Companies can make their own chocolate and use that as well, Weinstein said.

“We don’t want to be competing with the thousands of chocolate shops already out there,” he said. “We just want to get the chocolate printer out into the world. The business model is the machines plus the consumables for people who don’t have a background in chocolate.”

Weinstein envisions the Cocoa Press becoming an all-in-one chocolate shop, where customers can buy the printer and the chocolate from the company and then make their own. There are even plans to work with a couple of bean-to-bar chocolate manufacturers to distribute some of their own single origin chocolates. 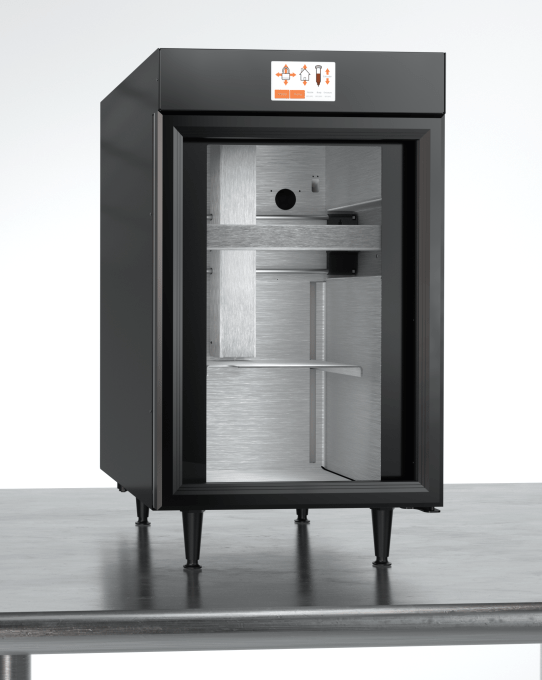 Chocolate shops can spend roughly $57,000 to buy the equipment they need, according to Weinstein, and at $5,500 the Cocoa Press begins to look like a bargain.

Weinstein expects to be shipping the printers by the middle of next year and will be launching pre-orders on October 10.

The young entrepreneur estimates that the market for 3D-printed confections would be half-a-billion dollar industry worldwide, but that doesn’t take into account chocolates, which have been too difficult for developers to manufacture an economical machine to produce.

And while Weinstein may not have started out with a sweet tooth, he’s certainly developed a taste for the industry now. And is looking forward to bringing the chocolates from small producers to a wider audience of connoisseurs who could potentially become entrepreneurs using his machine.