This morning, I analyzed Palantir’s newly published fifth amendment of its S-1 filing with the SEC as it pursues a public direct listing on the NYSE. I called the company “not a democracy” after it added new provisions to create a special mechanism called “Stockholder Party Excluded Shares” that would, in the language of Palantir, allow the company’s trio of founders to “unilaterally adjust their total voting power” at will, now and into the future.

Well, Palantir has now filed a sixth amendment with the SEC just a few hours after it filed its previous amendment, and the company has removed all references to this special mechanism from its SEC filing.

The 19 mentions of “Stockholder Party Excluded Shares” and multiple sections where the mechanism were discussed and explained have now been entirely excised. In addition, the company’s line about its founders having the capability to “unilaterally adjust their total voting power” has also been similarly removed.

Outside of those changes, the two different versions of the company’s S-1 filing are essentially identical. And for those keeping score from this morning, in this tenth rendition of the company’s public offering documents including its previous draft registration statements, the latest filing includes 168 mentions of “voting power” — identical to the number this morning. Here’s an updated chart: 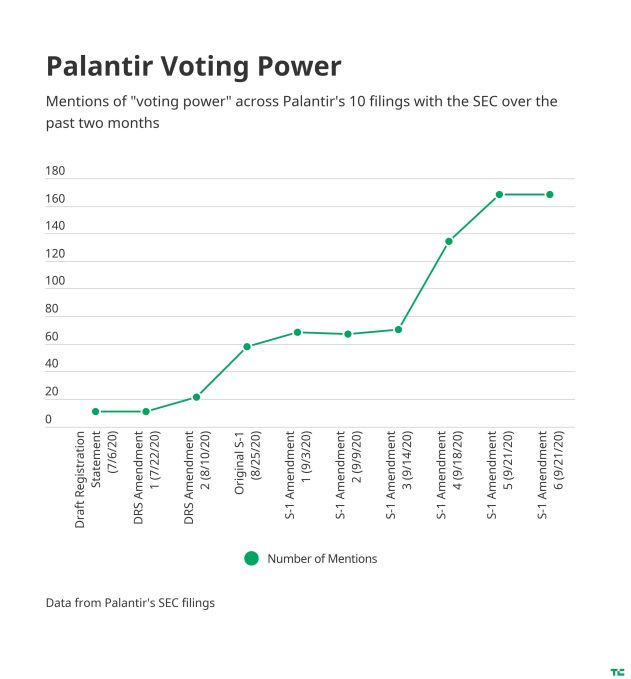 It’s a quick about-face for the enterprise software company, which has spent weeks prepping for its direct listing, originally scheduled for September 23 and which has since been moved back to September 29. While corporate governance has certainly gotten weaker over the past few years, Palantir’s newly introduced language this morning stretched the definition of shareholder governance quite frankly to its breaking point. Walking back those changes was the right call.

There’s no telling whether the SEC, NYSE, potential investors in the direct listing, executives or insiders pushed for these changes. However, companies rarely make such rapid changes with their SEC filings (then again, I’ve never seen an IPO with so many amendments in the first place, so we are in uncharted territory). Palantir remains in an SEC-mandated quiet period.

We’ll continue to monitor developments as Palantir heads to the public markets, presumably next week.

In its 5th filing with the SEC, Palantir finally admits it is not a democracy