“Like most of the best things in my life,” Conan O’Brien explains, with a wry smile, “the success of the podcast was a complete surprise.” The answer is a typically self-effacing one from the comedian. Since launching “Conan O’Brien Needs a Friend” nearly two years ago, the show has quickly risen up the podcasting charts to become one of the country’s most popular.

For those who have followed his 30-odd-year career in entertainment, it’s easy to see why. Quick-witted and almost superhumanly affable, the transition to podcasting seems almost a given in retrospect. After all, hosting a series of late-night network talk shows for decades isn’t exactly starting from scratch when it comes to launching a new entertainment venture. Nor, for that matter, is having tens of millions of Twitter followers and your own online media company, Team Coco.

Not that things have always been easy. A long-promised Tonight Show slot wasn’t all he’d hoped for, leading to a very public exit from the most-coveted show in late night after just under eight months. It was the shortest tenure in the series’ history, culminating in a televised “exit interview” with Steve Carrell that found The Office star shredding his NBC badge. But O’Brien’s late-night hiatus was short-lived. Later that year, he returned with TBS’ Conan, which will celebrate its 10th year on the air in November (and is renewed at least through 2022).

The 2018 launch of “Conan O’Brien Needs a Friend” found the comedian embracing the new-found freedom of podcasting.

“There are a couple of things about doing podcasts that are superior or more fun than doing a talk show,” a quarantine-haired O’Brien said in an interview at TechCrunch Disrupt this week. “When I’m doing the traditional talk show, I’m limited. For years and years and years, when it was on network television, I had to take six- and seven-minute turns, which mean I’m having a conversation with you or I’m having a conversation with someone I’ve always dreamed of talking to, whether it’s Tom Hanks or Jim Carrey or Robin Williams. Then after six or seven minutes, there has to be a laugh and we’ll take a break and we’ll be right back.

“That’s not a natural conversational flow,” he continues. “What you can do with a podcast is really incredible. I can talk to someone for an hour and 15 minutes. We try and trim them back, but for the most part, people let their guard down. The other thing I prefer: no hair and makeup. It sounds like I’m kidding. But after almost 30 years of people caking my very white face with makeup so that I look like I’m still alive.”

“I don’t want to set a number goal,” O’Brien says. “I’m amazed — in two years, we’ve rolled out 10 different podcasts, some of them unscripted, but some scripted ones, as well. I’m not sitting around saying, ‘hey, we’ve got to get to 35 podcasts by this point.’ Because I’d like them to be good.”

As my hair grows, so do my powers… pic.twitter.com/BqVGj4s8VI

The talk show has soldiered on, as well, undergoing its own transformations in the process.

In 2019, the program was retooled for a half-hour format. O’Brien dropped the desk and the suit, adopting a looser format perhaps inspired in part by the new freedoms afforded by his podcasting ventures. When COVID-19 made the in-person show an impossibility, he started working from home like so many others, switching to remote Zoom interviews. Throughout it all, “Conan O’Brien Needs a Friend” continued posting weekly interviews.

Asked whether he planned to continue his late-night show after the contract runs out in a couple of years, O’Brien seemed unsure.

“I think it’s a mistake to think of it as, will you stop doing the show, and only do the podcast? Or will you retire and then quietly work on your letters in a shack? I love to create things. I have a lot of energy. I love to try and make people laugh. And so I see All of this converging, I think the message that I would have for everybody watching TechCrunch Disrupt right now is that people need to open up their minds a little bit. If I’m making podcasts, it doesn’t prohibit me from also maybe do maybe doing something, it doesn’t have to necessarily be for Turner, it could be for anybody.” 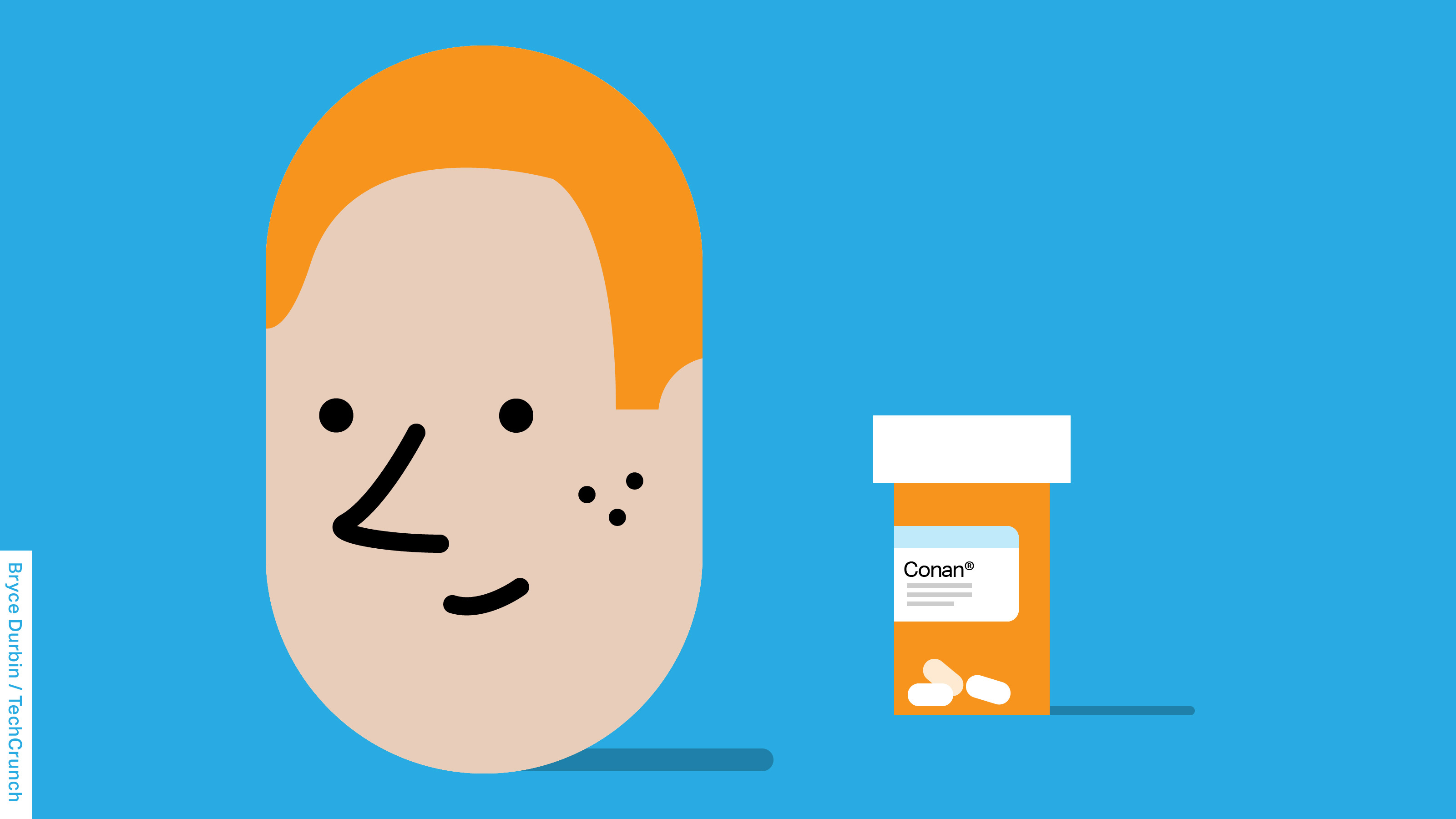 Multiple decades of success, it seems, have put O’Brien in the relatively unique position of being able to be somewhat platform-agnostic. Not being tied to a single medium is a strong place to be when it comes to bracing oneself for the unexpected technological changes that will continue to disrupt and upend the entertainment industry.

“Five years from now our entertainment may come in pill form,” he says. “You could binge The Sopranos. You could just take a whole bottle of Sopranos and then just drink a lot of water and then, you know, just don’t need any red meat.

“This is gonna sound far-fetched, but I think this is the most excited I’ve been in my career, because there were so many ways to be creative. There are so many ways to make people laugh, and I enjoy these new opportunities. I think when you’re someone who has been around as long as I have, you have a choice. You can be afraid of change, or you can be delighted by it.”