If you’ve got a large online following, as well as knowledge that might be valuable to that audience, Prox is a startup currently in beta testing that’s building tools to help you make money.

Michael Mathieu, formerly the CEO of YuMe, joined Prox as CEO in January. The goal, he told me, is to create an entire suite of “back office” tools for experts and influencers, but the company is starting out by offering an easy way to host one-on-one video sessions with fans and “knowledge seekers.”

“People who are influencers on social media and on YouTube, they don’t control that customer,” Mathieu said. “It’s a YouTube customer, so if you’re going to monetize, it’s through a slice of YouTube ad revenue.”

So Prox is designed to help those experts make money more directly from anyone who wants to connect with them, and to understand that audience. Mathieu suggested that the need has intensified during the pandemic, with more experts and creators asking, “How do I connect to my audience in more significant ways, have multiple revenue streams and actually have really good visibility into who they are?”

Head of Customer Success Nicole Healy said that many of the “pros” already using Prox are “published authors looking for another connection point.” 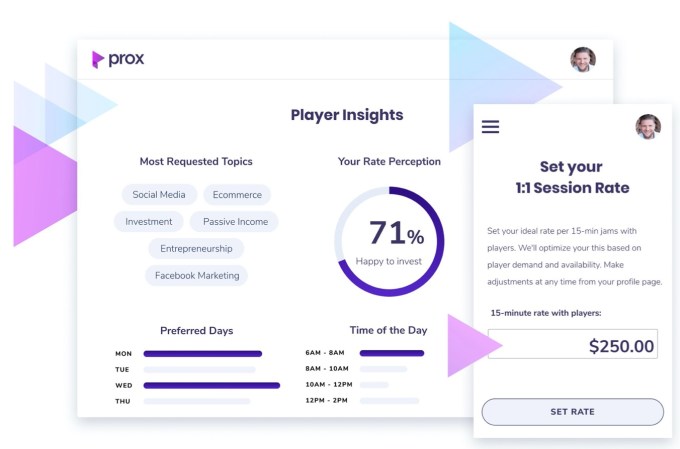 The Prox team gave me a tour of the platform from both the knowledge seeker and pro side. It looks fairly straightforward for someone to try to schedule a meeting with a pro and then jump into a video call. The knowledge seeker controls the meeting agenda, but the pro also gets to screen appointments and topics in advance, and they also set their own rates for how much their time is worth. (Head of Product Matt Coalson said some pros are able to charge $150 for a 15-minute call.)

Afterwards, both the knowledge seeker and the pro can rate the experience, and they can schedule follow-up calls if it went well. Prox also provides analytics for pros around the kinds of feedback they’re getting and the most commonly asked questions.

I’ve previously written about Superpeer, another startup helping influencers and experts make money from one-on-one calls, but when I brought it up, Mathieu suggested that the competitive landscape is much broader, with influencers having access to a range of tools for marketing and monetization.

“The way we position ourselves compared to the competition is, we’re really purpose-built for providing value to that pro,” he said. “It’s not just about that platform — video, audio, ratings, that has significant value, but our goal is to provide the layer above that, to give the pro, in essence, a road map: If you’re on Prox and you do these two or three things, you’ll make 10x more money.”