Desktop Metal is one of the most interesting startups to come out of Boston in some time, with a technology designed to “print metal.” That’s a potentially huge expansion for the 3D printing market, where flexible polymers are the norm, a material that limits the kinds of products that these machines can produce. Little surprise then that the company caught the eye of a SPAC a few weeks ago, and, if all goes well, will begin publicly trading later this year.

Desktop Metal going public in SPAC-led deal that could value 3D printer company at $2.5B

This morning, the SPAC (called Trine) and startup have filed their latest financial and shareholders report with the SEC, giving us some sense of who the big VC winners are here.

First, let’s take a look at Desktop Metal’s preferred share price since its Series A back in 2015. The company has seen its price soar over the past five years, from $0.53 for its Series A to just slightly more than $10 for its Series E shares it sold last year. 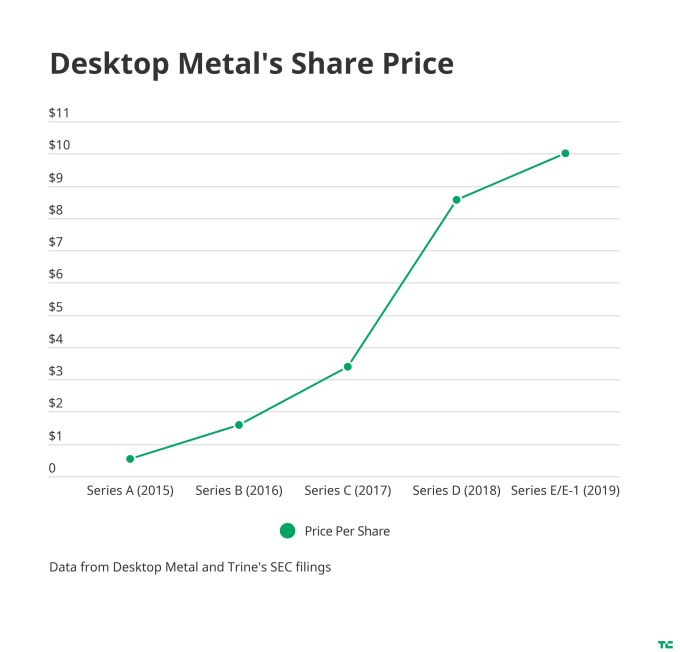 Desktop Metal is valued at $1.83 billion of the total $2.5 billion SPAC price. The difference in those two figures comes from the $305 million of capital held by the SPAC and $275 million in a private investment into the company that will be conducted as part of the acquisition, along with fees and some other ancillary financials.

What does that look like from a returns perspective? Desktop Metal raised six rounds of capital (Series A through Series E & E-1), raising a total of $438 million, according to the company’s filings. Using the numbers from these filings, we can do some back-of-the-envelope math to make some rough guesses at how the individual funds returned on their investment. 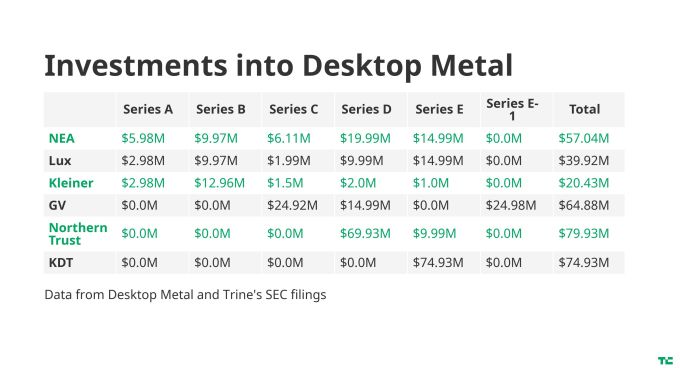 The biggest overall winner in terms of multiples on investment is Kleiner Perkins, which sits at a roughly 10x return on its full investment into the company. Kleiner took a fifth of the Series A, putting in roughly $3 million. It then proceeded to double down in the Series B, where it invested approximately $13 million, before tapering off its pro rata in later rounds. Given that its $20.4 million in invested capital is skewed toward the earliest rounds, that drove up its return multiple.

NEA, perhaps owing to its larger fund scale, constantly invested in the company across all of its rounds, ultimately investing about $57 million. It invested in Desktop Metal through its seed program, and also did about 43% of the Series A. It continued to invest heavily across all the company’s growth rounds as well. Ultimately, NEA had a computed multiple on investment of roughly 5.67x.

Finally, among early-stage investors, Lux managed to secure a 5.31x return, and it similarly plowed money into the company across all of its rounds, albeit slightly less aggressively than NEA, ultimately investing about $40 million into Desktop Metal.

Heading over to the growth investors, GV started investing in the Series C round and invested a total of about $65 million across the later stage, securing a return of 2.5x. Northern Trust came in on the Series D and netted 1.6x, and KDT of Koch Industries ended up with about 1.44x through its mezzanine capital infusion.

This includes all investors with more than 5% ownership in the company, per SEC regulations. Approximately $100 million of the company’s $438 million in fundraising is not disclosed on its cap table, so there might be other VCs with swell returns that weren’t obligated to disclose their shares. In addition, I am not including some minor common share stakes held by these venture firms, which are small enough to not radically change their return profile.

Desktop Metal’s quick appreciation in value over just five years will also give these firms very strong IRRs for their investments.

Given that Desktop Metal is heading to the public markets through a SPAC, all of these investors have an option to sell their stakes or hold on to them going forward. If they hold and Desktop Metal performs well, their stakes could increase dramatically in value, driving much higher returns. The reverse is naturally also true. Once public, the firms have flexibility on if and when to exit, and that decision will ultimately determine their final realized returns to LPs.

For now though, this is a great checkpoint to see just how successful some of these venture firms were on this deal. Maybe firms can print gold with those 3D printers after all.