Peloton has launched two new products for its home smart gym lineup, the Bike+ ($2,495) and the Tread ($2,495). While both carry the same price tag, the new exercise bike joins as the premium version of Peloton’s original stationary cycle, which will remain on sale at $1,895, and the Tread is the new entry-level Peloton treadmill product, with the original becoming the Tread+ at $4,295. Both products were leaked by Bloomberg last week prior to their official unveiling on Tuesday.

The new Peloton Bike+ includes a 23.8″ rotating, HD resolution touchscreen display. It can move 180 degrees in either direction, which is meant to allow at-home exercisers to use the screen (and Peloton’s range of remote workout instruction and classes) while they’re off the bike. There’s also a built-in four-speaker sound system, a one-tap contactless integration with Apple Gymkit that allows you to sync workouts to your Apple Watch and an Auto-Follow resistance system that scales the resistance of the bike depending on your own target metrics for heart rate and breathing.

As mentioned, the Bike+ retails for $2,495, which is around $600 more than the newly repriced entry-level Bike. It’s going on sale in the U.S., Canada and Germany starting on September 9, and will be available on a financing plan for installment payments. Peloton will also make it available on a 30-day home-trial basis, as it does on its existing equipment.

Likewise, the new Tread will be available over a financing period with installment payments, and comes with the trial period. It’s set to launch in early 2021 in both the U.S. and Canada, but will go on sale a bit earlier in the U.K. (on December 26, 2020). Germany will also get the new treadmill, but that’ll be later in 2021, according to the company. 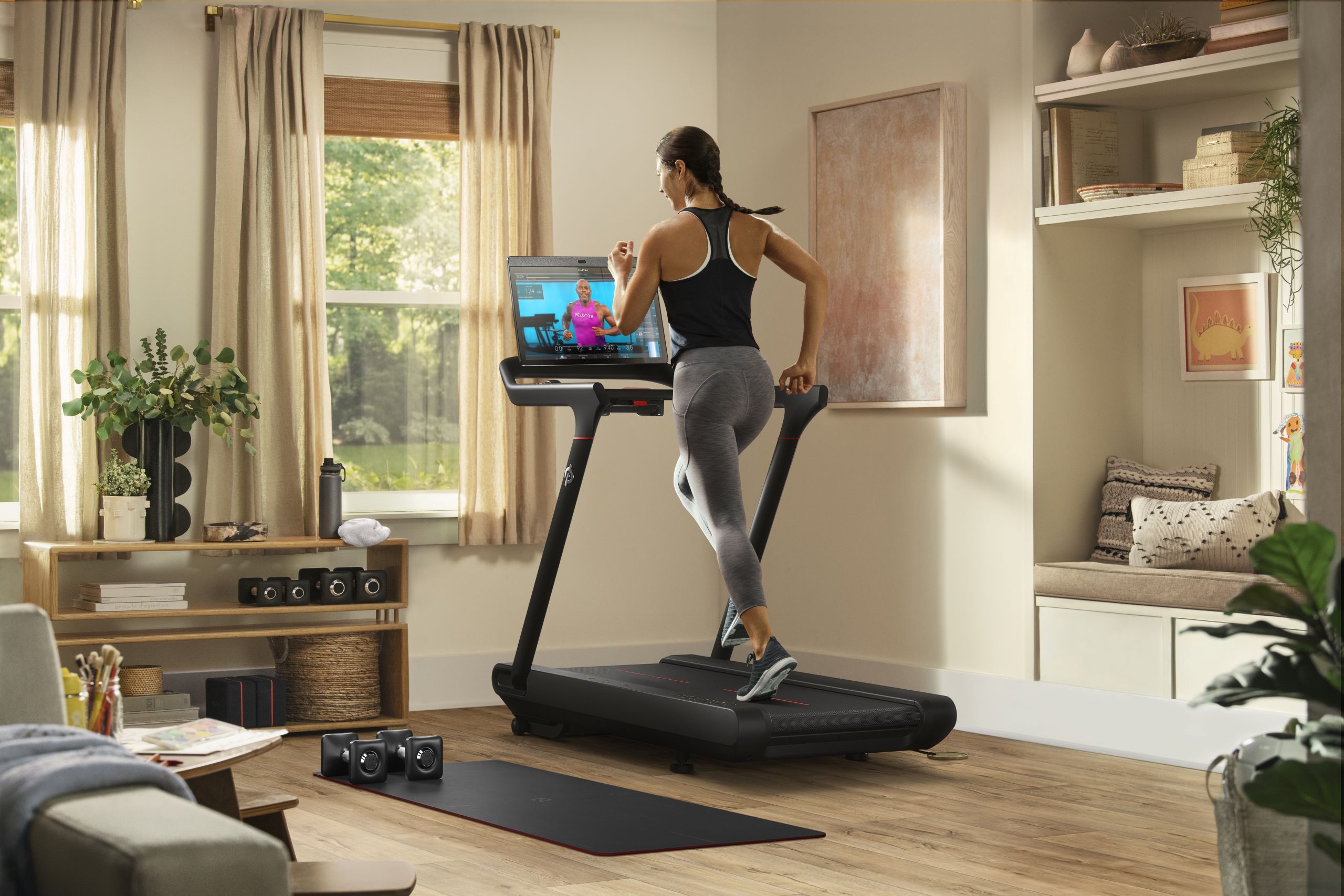 As for what the Tread provides, it also has a 23.8″ HD touchscreen, but it doesn’t rotate — it does tilt up and down 50 degrees for floor-based workouts, however. The new Tread is “smaller than most couches” according to the company, at 68″ L x 33″ W x 62″ H. It looks like a much more traditional treadmill belt assembly than the one found on the more premium Tread+, but the company points out that it doesn’t have any kind of front shroud housing like you’d find on most treadmills, which does lighten the look of the whole thing.

Peloton also announced a new kind of class called “Bike Bootcamp” that includes strength training to provide a more comprehensive total body workout, alongside cardio exercises. Sounds like the perfect complement to that rotating display on the Bike+, in case it wasn’t clear that the company wants to be the one-stop shop for a holistic home exercise program.

In case any recent Peloton purchasers were feeling buyer’s remorse about the new gear, Peloton says that it’s automatically refunding anyone who is still in their 30-day home-trial period, or who is still waiting for the Bike to be delivered, in order to instantly provide them the $350 price drop that they’ve instituted for the original exercise bike. Anyone who falls in that group and wants to swap for the upgraded model will also be able to do that while paying the difference. 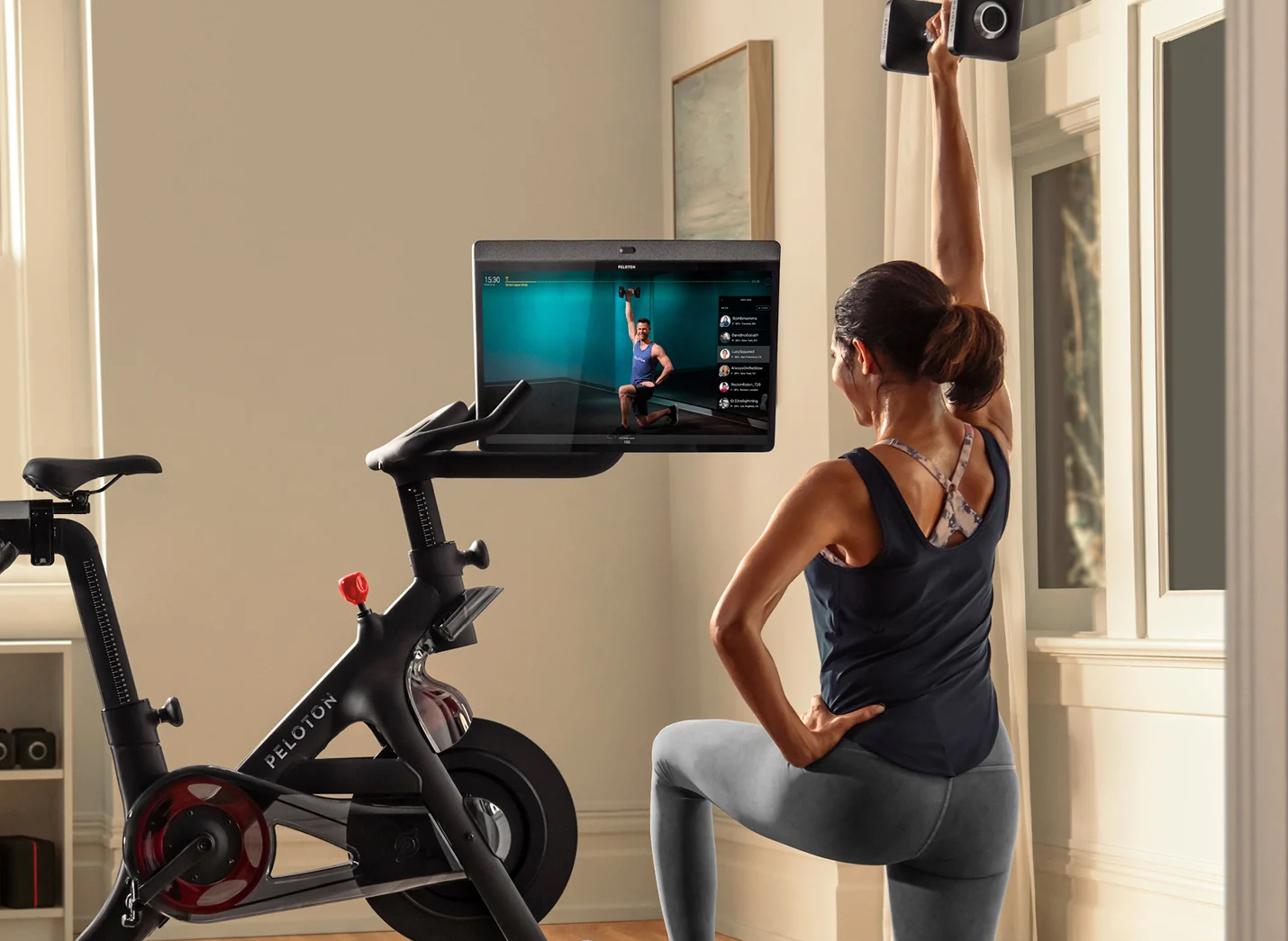 Meanwhile, if you’re not a recent purchaser but still would like some new gear, Peloton is extending a trade-in offer to current Bike owners that will provide them a $700 rebate, along with a Yoga & Training accessory equipment set, and free pick-up of your old bike when they deliver your new one. Not a bad upgrade incentive.