Ride hailing giant Uber is committing to becoming a fully zero-emission platform by 2040 and setting aside $800 million to help get its drivers using electric vehicles by 2025.

The company said that it would invest further in its micromobility options as well with the goal of having 100% of its rides take place on electric vehicles in the U.S., Canada and European cities in which the company operates. Uber also said it would commit to reaching net-zero emissions from its own corporate operations by 2030.

If the company can hit its timeline, Uber would achieve necessary milestones in its operations a decade ahead of the Paris Climate Agreement targets set for 2050.

The keys to the company’s efforts are four new and expanding initiatives, according to a statement.

The first is the launch of Uber Green in 15 U.S. and Canadian cities. For customers willing to spend an extra dollar, they can request an EV or hybrid electric vehicle to pick them up. By the end of the year, Uber Green will be available in over 65 cities around the world. Riders who choose the green option will also receive three times the Uber Rewards points they would have received for a typical UberX ride, the company said.

Uber’s second step toward making the world a greener place is to commit $800 million to transition its fleet to electric vehicles. Part of that transition is being subsidized by the $1 surcharge for riders who choose to go green and from fees that the company collects under its London and French Clean Air Plans. Those are 15 cent (or pence) surcharges that Uber has been collecting since January of last year to pay for the electrification of its drivers’ cars in European cities. 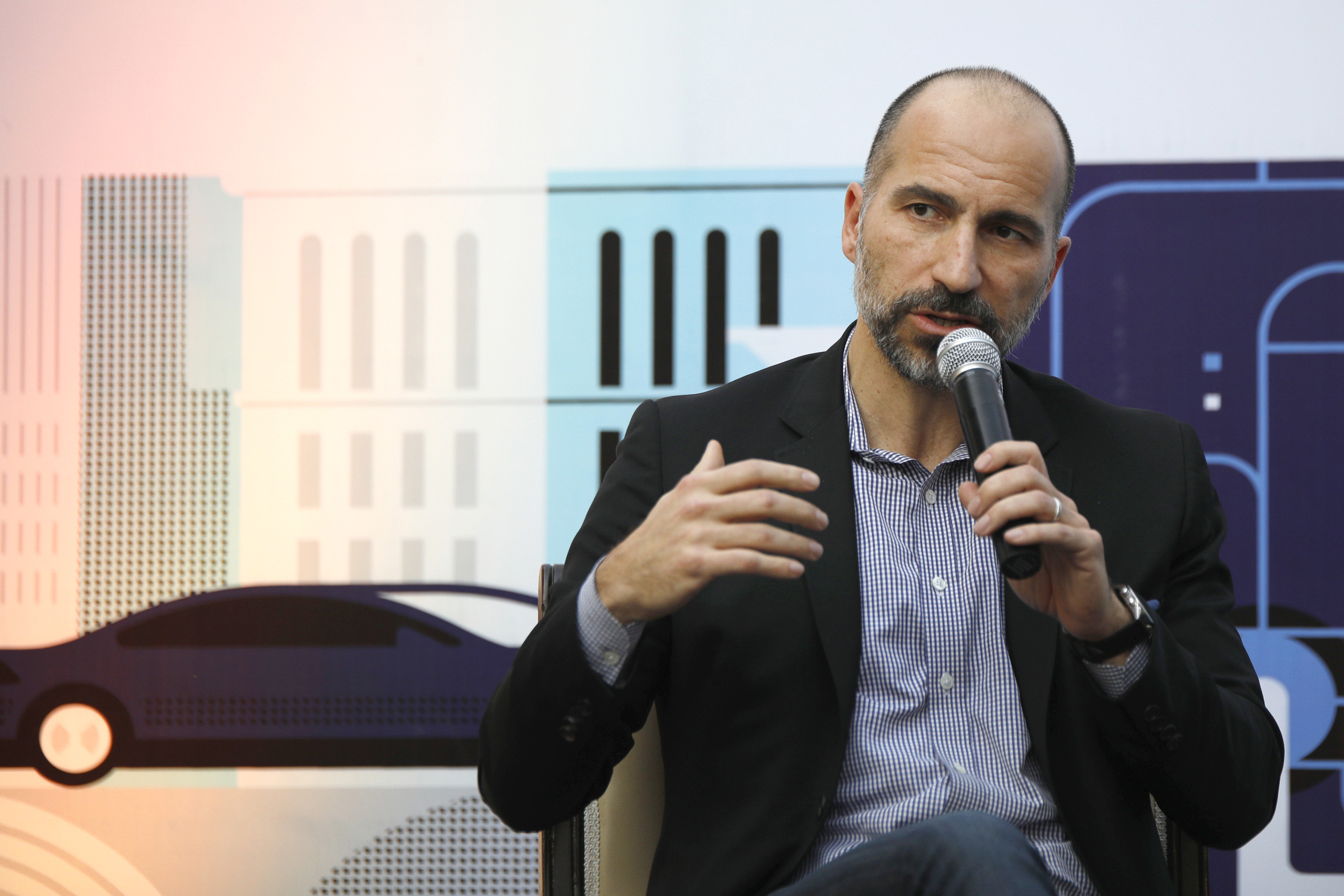 Dara Khosrowshahi, chief executive officer of Uber Technologies Inc., speaks during an event in New Delhi, India, on Thursday, Feb. 22, 2018. During his Japan trip, Khosrowshahi has made it clear the ride-hailing company isn’t scaling back its ambitions in certain Asian markets, despite speculation of a retreat. Image Credits: Anindito Mukherjee/Bloomberg via Getty Images

To incentivize drivers to go green, Uber’s doling out an extra 50 cents per trip in the U.S. and Canada for every “Uber Green” trip completed to be paid out by riders. Drivers using EVs will also get another dollar from Uber itself, amounting to $1.50 more per trip for each EV ride completed.

Other enticements include partnerships with GM in the U.S. and Canada and Renault-Nissan in Europe to offer discounts on electric vehicles to Uber drivers. Working with Avis, Uber is planning to offer more electric vehicles for rental to U.S. drivers. Meanwhile, the company said it would also expand electric vehicle charging by working to develop new charging stations in conjunction with companies like BP, EVgo, Enel X, Izivia by EDF and PowerDot.

Uber’s also working to revive the vision of robotic battery swapping to enable customers to forget about their concerns when it comes to charging a new vehicle. It’s working with the San Francisco-based startup Ample, as the young company develops its battery-swapping tech — and Lithium Urban Technologies, an electric fleet operator out of India.

Building on its existing micromobility network, the company is going to integrate bikes and scooters from Lime even closer into its networks and expanding its shared ride programs as soon as it’s safe to do it. The company is also intent on expanding its Journey Planning feature to enable users to see pricing options, schedules and directions to and from transit stations. Uber also now offers in-app ticketing in more than 10 cities, so people can buy public transit passes in the app itself. As a coup de grace, Uber’s also unveiling a new feature that allows users to plan their trips in Chicago and Sydney using cars and public transit to get where they need to go.

Finally, the company has released its first Climate Assessment and Performance Report analyzing emissions from the company’s operations in the United States and Canada from 2017 through 2019. Unsurprisingly, Uber found that it was more efficient than single-occupant driving, but the company did reveal that its carbon intensity is higher than that of average-occupancy personal cars. Meaning when there’re two people using a personal car, their footprint is lower than that of an Uber driver looking for passengers.

Although arguably, Uber shouldn’t be having its customers foot so much of the bill for its electric transition, these are all positive steps from a company that still has a long road ahead of it if it’s looking to reduce its carbon footprint.