Quick, what was the first portable gaming system Nintendo made?

If you said “Game Boy”… solid guess, but not quite. For nearly a decade before Nintendo released that iconic gray beast, it was making the Game & Watch — a collection of handheld devices, each dedicated to playing just one or two simple games and, occasionally, doubling as a clock.

Hammering that nostalgia button in a way that few other companies can, Nintendo announced this morning that the Game & Watch will be making a modernized, but limited edition, return.

As with the original Game & Watch lineup, it seems like this one is meant to be pretty limited in the number of different titles it can play. On the official product page, Nintendo mentions “Super Mario Bros.,” “Super Mario Bros. 2: The Lost Levels” (or just “Super Mario Bros. 2,” as it was known in Japan) and a Mario-skinned remake of “Ball,” the first Game & Watch title that shipped back in April of 1980. So three games in all… but given what we’ve seen happen with previous devices like this, I wouldn’t be surprised if the fans crack it open and have it running a whole lot more than that in no time flat.

A lot has changed in 40(!) years, so Nintendo is sneaking a few upgrades into this Game & Watch that probably seem like givens today. It has a full-color LCD, for example, whereas the original displays were black and white — and you’ll be able to charge it over USB-C, rather than having to burn through a stack of button cell batteries. Nintendo says it should last around eight hours per charge. 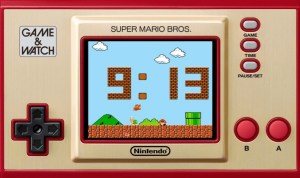 When you’re not playing one of the included games, this thing turns into a little portable clock (thus the “& Watch” part of its name), with 35 different Mario-themed scenes in all. If Nintendo does that clock feature right, I can see these things earning a permanent spot on a lot of people’s desks.

While Nintendo notes that it’ll be a “limited” run, they haven’t said exactly how many of these they’ll be making… and while pre-order details are “coming soon,” they’re not getting more specific than that. They do say it’ll ship on November 13th with an MSRP of $50… but beyond that, if you’re worried about getting one of these, you’ll want to keep an eye out for more details.