As far as launches for revolutionary products are concerned, the Galaxy Fold could have gone a lot better. It’s not for lack of hype, of course. Years of prelude punctuated by Samsung’s own breathless expectations provided plenty of build-up, but in the end, the device felt like a partially baked disappointment.

A number of early units broke for a variety of reasons. Samsung recalled the foldable, went back to the drawing board and released it on a delayed timeline. I ran into issues with my second sample pretty quickly. At the end of the day, the device just demanded a level of gingerliness most users can’t really afford with a day-to-day mobile device.

My Galaxy Fold display is damaged after a day

The Galaxy Fold Z 2, which was the centerpiece of today’s Unpacked annex event, is largely devoted to addressing the biggest complaints about the original. Given the issues with the original, that’s about as admirable a goal as any. We were all aware that the Galaxy Fold was going to be a learning process for Samsung — and certainly there’s a certain degree of throwing caution to the wind — but relative to the company’s other device, it just didn’t feel finished.

We certainly didn’t feel comfortable advising people to purchase the device for $2,000. The Fold Z 2 is priced the same (which is to say still prohibitively expensive for most), but it could be the product the first gen should have been. I’m going to wait until we’ve had sufficient review time to say anything definitive about the device, but in Samsung’s defense, the company does seem to have addressed most of the major issues with the original — thanks in no small part to some advances introduced with Flip last year.

The biggest update here is the addition of what the company calls “Ultra Thin Glass” to the primary foldable 7.6-inch display. That was one of the largest pain points of the original — as cool as the technology is, it’s not worth a lot if the touchscreen can’t withstand touches. The technology here is more or less the same as what Samsung introduced with the Flip. 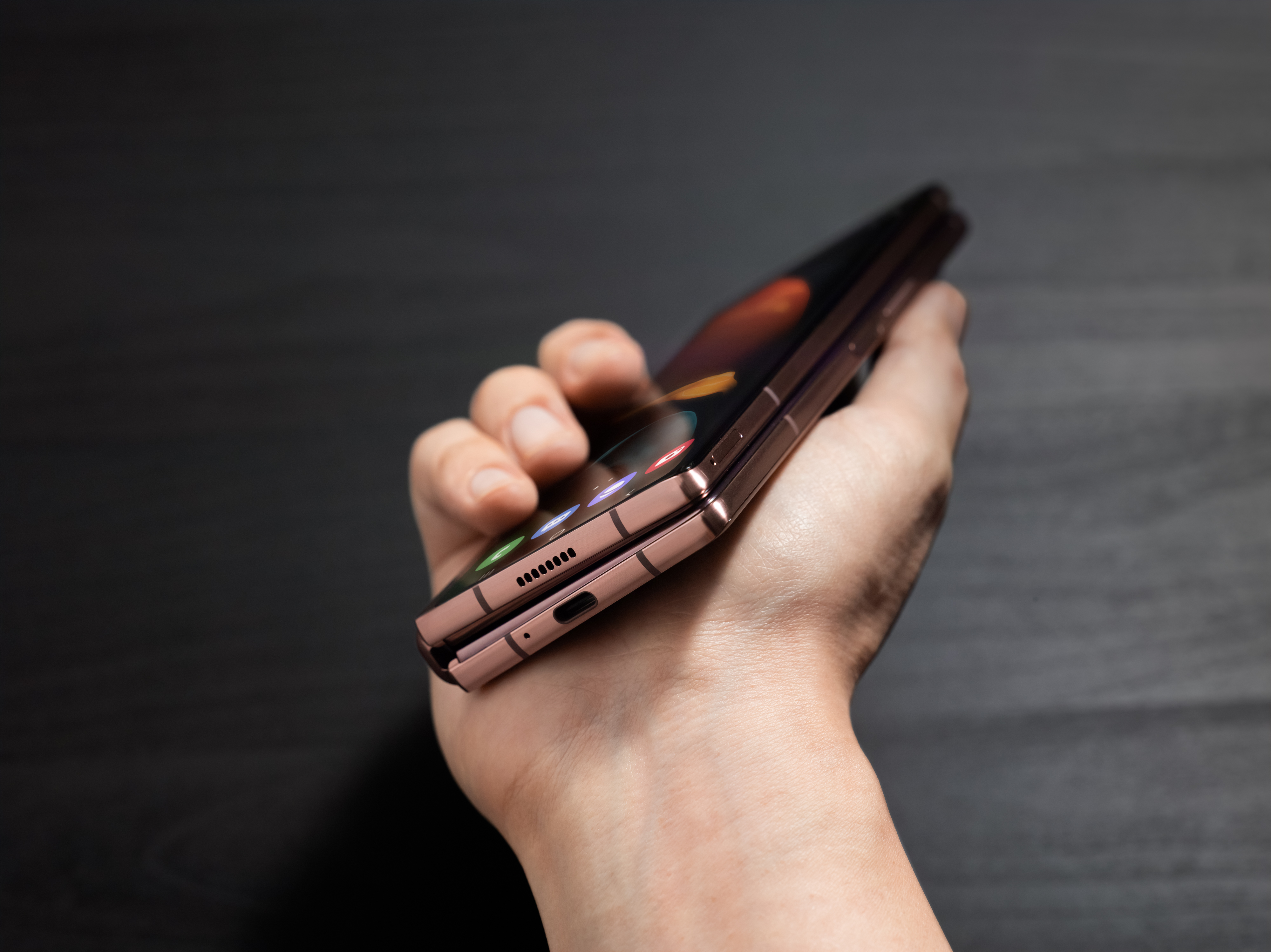 The same goes for the new “sweeper” technology, which builds in a brush to wick away particles that might otherwise fall into the phone. This was another issue with the original — crap was getting behind the screen, causing damage when pressure was applied to the front by the user. This is the third-generation of the feature, according to Samsung, sporting a thinner brush than the original. Per the company:

That’s a fancy way of saying they made thinner bristles. The hinge has also been improved to allow the device to stand at a variety of angles. That’s going to be an important point as the company looks to compete directly with the likes of Microsoft’s Surface Duo and any other dual-screen devices coming down the road. That’s augmented by Flex Mode (another Flip addition), which reconfigures the screen to make the best use of the partially open display.

The other big update here is the addition of a much larger front-facing screen. At 6.2 inches, the front of the device is actually a serviceable display for use while the device is closed. Last time around, the front-facing screen had a weirdly long aspect ratio and wasn’t really great for anything but notifications. The company seemingly took something away from Huawei’s first dip into the foldable category.

The new Fold has 5G support, of course — that’s now standard across the company’s flagships, along with some mid-tier devices. That’s coupled with a beefy 4,500 mAh of battery life (split in two, each behind a display), 12GB of RAM and 256GB of storage. There’s only one memory/storage option for the device for the States, which will run $2,000.

That entitles the buyer to the Galaxy Z Premier service, which includes on-demand support for the phone and a one-time replacement after accidental screen damage. There’s also a bunch of other perks thrown in, like Founders Card membership and access to golfing, or dinner at a Michelin-star restaurant. I would have preferred a pair of Galaxy Buds, to be honest, but Samsung’s really pushing the luxury angle here.

The Galaxy Z Fold 2 is up for pre-order September 2, and starts shipping on the 18th.