No company is completely insulated from the macroeconomic fallout of COVID-19, but we are seeing some companies fare better than others, especially those providing ways to collaborate online. Count Atlassian in that camp, as it provides a suite of tools focused on working smarter in a digital context.

At a time when many employees are working from home, Atlassian’s product approach sounds like a recipe for a smash hit. But in its latest earnings report, the company detailed slowing growth, not the acceleration we might expect. Looking ahead, it’s predicting more of the same — at least for the short term.

Part of the reason for that — beyond some small-business customers, hit by hard times, moving to its new free tier introduced last March — is the pain associated with moving customers off of older license revenue to more predictable subscription revenue. The company has shown that it is willing to sacrifice short-term growth to accelerate that transition.

We sat down with Atlassian CRO Cameron Deatsch to talk about some of the challenges his company is facing as it navigates through these crazy times. Deatsch pointed out that in spite of the turbulence, and the push to subscriptions, Atlassian is well-positioned with plenty of cash on hand and the ability to make strategic acquisitions when needed, while continuing to expand the recurring-revenue slice of its revenue pie.

Deatsch told us that Atlassian could not fully escape the pandemic’s impact on business, especially in April and May when many companies felt it. His company saw the biggest impact from smaller businesses, which cut back, moved to a free tier, or in some cases closed their doors. There was no getting away from the market chop that SMBs took during the early stages of COVID, and he said it had an impact on Atlassian’s new customer numbers. 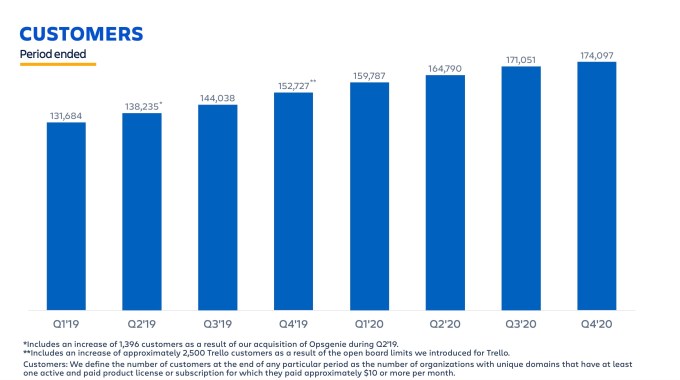 Still, the company believes it will recover from the slow down in new customers, especially as it begins to convert a percentage of its new, free-tier users to paid users down the road. For this quarter it only translated into around 3000 new customers, but Deatsch didn’t seem concerned. “The customer numbers were off, but the overall financials were pretty strong coming out of [fiscal] Q4 if you looked at it. But also the number of people who are trying our products now because of the free tier is way up. We saw a step change when we launched free,” he said.